by Bob Shepard
Five members of UAB’s environmental services department will be feted in “United we Sing: A Grammy® Salute to the Unsung Heroes,” airing Sunday, June 21, at 7 p.m. CT on the CBS network. 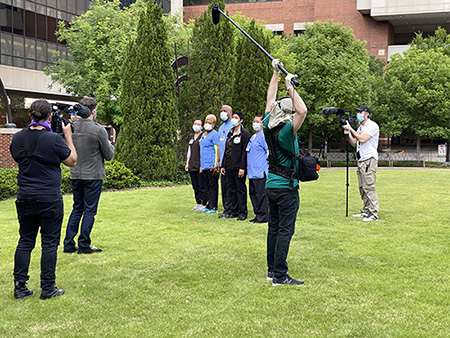 In May, Harry Connick Jr. and a CBS television video crew stopped by UAB Hospital to recognize unsung heroes of the COVID-19 pandemic. Five members of UAB’s environmental services department will be feted in “United we Sing: A Grammy® Salute to the Unsung Heroes,” airing Sunday, June 21, at 7 p.m. CT on the CBS network.

The show is hosted by Connick, a Grammy® and Emmy award-winning singer and actor. He and his filmmaker daughter, Georgia Connick, took a road trip in an RV to thank and celebrate essential workers who risk their own lives on a daily basis to keep others safe. The UAB stop May 12 celebrated those who clean and disinfect hospital rooms and treatment areas during these difficult times.

“We chose five representative members of our Environmental Services department to meet with Harry Connick Jr., and we could have picked each and every one of our employees,” said Ed Crump, senior director of Environmental Services for UAB Hospital. “We are thrilled that CBS is shining a light on the important work our staff engages in every day: keeping UAB Hospital as clean and safe as possible to minimize the threat of infection for our patients and our health care workers.”

The Connicks’ journey began at their home in Connecticut, with stops in various cities along the way to their final destination of New Orleans. At each stop, the father-daughter duo listened to the stories of essential workers in health care, food preparation, sanitation, law enforcement, trucking and more to honor their dedication and public service during this unique moment in history.