Need for professionals who speak a second language greater than ever

by Shannon Thomason
Proficiency in a foreign language can help in almost any career field; for instance, at UAB, French majors have a strong record of admission to medical school. 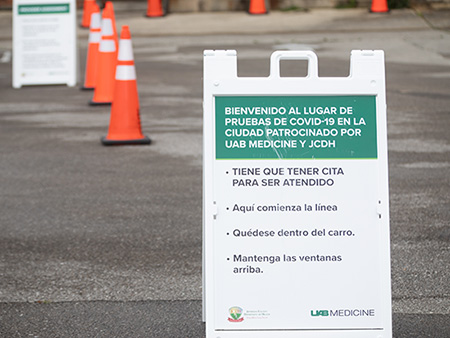 A sign in Spanish at a recent COVID-19 testing site sponsored by UAB Minority Health & Health Disparities Research Center. Call for information and to register for a test at 205-975-2919..Imagine not being able to understand the warnings when the novel coronavirus pandemic struck, or getting a life-altering diagnosis from a doctor who does not speak your language.

With the rapid spread of COVID-19 and the ensuing health crisis, the ability to communicate vital information with each other is more important than ever.

As the University of Alabama at Birmingham responded to the pandemic, news briefings with infectious disease doctors and COVID-19 information, including how to protect yourself from the virus, were shared online and posted to uab.edu/coronavirus. Faculty in the College of Arts and Sciences’ Department of Foreign Languages and Literatures stepped up to quickly translate the guidance for the Spanish-speaking community; the resulting Spanish language pages soon became the most visited on the site. Signs and assets for campus use have also been translated.

Professor of Spanish Lourdes Sánchez-López, Ph.D., and Assistant Professor of Spanish María Antonia Anderson de la Torre, Ph.D., translated nearly all of the information. The importance of learning languages in undergraduate education for the health-related professions in the United States cannot be understated. In dealing with an unprecedented health crisis, it is imperative to provide the same information to all citizens and residents, regardless of who they are and what language they speak, Sánchez-López says.

“It is critical to offer the information at least in Spanish in addition to English and American Sign Language,” said Sánchez-López. “Spanish is not a foreign language in the United States. There are about 60 million Hispanics in the United States, more than in Spain, and this number will only grow. The U.S. is plurilingual, and higher education, starting from undergraduate, must be at the core of the solution to health care disparities.”

Birmingham has a lot of first-generation immigrants, with low English proficiency, says Jean Hernandez, M.A., Latinx outreach coordinator for AIDS Alabama. In her role, Hernandez collaborates with the 1917 Clinic, Birmingham AIDS Outreach and other clinics serving people with HIV/AIDS. She accompanies clients to different medical appointments, to interpret and translate, advocate for the patient, and help remove barriers to care. When the pandemic began, organizations for immigrants received a flood of calls, she says, from people trying to understand what was happening and what they should do — concerned about the virus, their families, how to get masks and whether they would be able to work. 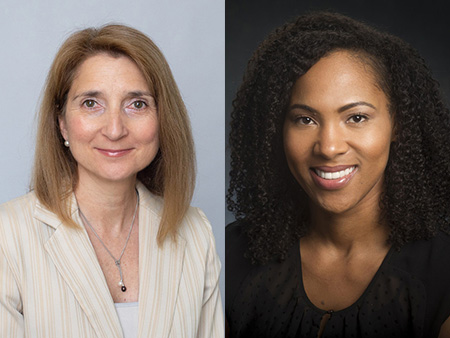 Kierstin Cates Kennedy, M.D., chief of UAB Hospital Medicine and clinical associate professor, earned a Bachelor of Arts degree in Spanish at UAB. She says speaking more than one language has been incredibly beneficial, in her ability to both connect with patients and better understand their experience. Having learned as an adult, she says she understands how difficult it is to learn a second language after so many years of speaking only one, and how much effort it takes to master all of the quirks of another language.

“Imagine being in a country where you don’t speak the native language, or don’t speak it very well, and the discomfort that would bring,” Kennedy said. “Now imagine being sick, in the hospital and literally afraid for your life — you would want to communicate in your native language to be sure that you fully understand and that the care team fully understand you. I would imagine that our being able to speak Spanish helps bring a level of comfort to patients when they could use it most.”

Speaking English and Spanish has made her more marketable professionally because she has a skill that many other applicants may not. It has also allowed her to participate in mission work with a mentee, in the mentee’s home country of Nicaragua. Personally, she says it has given her an appreciation for other cultures that she did not have before her foreign language studies; it has also been incredibly helpful with travel out of the country, she says.

UAB Hospital offers dual-handset telephone consoles in patient care areas to reach interpreters, with access to 150 languages, which has been incredibly helpful in caring for patients during hospitalization. But there is still a need for robust resources in Spanish for post-discharge care and follow-up, Kennedy says.

“We also need more case managers and social workers who speak Spanish to help with care transitions,” Kennedy said. Hernandez agrees, and adds teachers and lawyers who can speak Spanish to the list of needs in the Birmingham community.

Learn a second language with UAB

Proficiency in a foreign language can help in almost any career field; for instance, at UAB, French majors have a strong record of admission to medical school.

Many foreign language students whose plans to study abroad were disrupted by the pandemic have turned to service this summer. Being at home has given people time to study a foreign language, and that is time well spent — there are many things graduates can do with a foreign language degree, and the valuable skills learned can help transform their community.

Providing students with the language skills they need in whatever career they choose is one of the goals of the UAB Department of Foreign Languages and Literatures. The department offers academic programs in French, Spanish, Arabic, Chinese, German, Italian and Japanese.

For students interested in Spanish, the department offers an array of degree options:

The UAB School of Education offers graduate degrees and a graduate certificate for the teaching and learning of English as a Second Language and English as a Foreign Language — some of which can be completed online.

Reaching everyone in our community

Cultural challenges abound, from providers resistant to work with translators to patients whose rights to privacy are impacted due to the need for translation. Even food becomes an issue when a patient is very sick and in need of nutrition but cannot express their wishes. 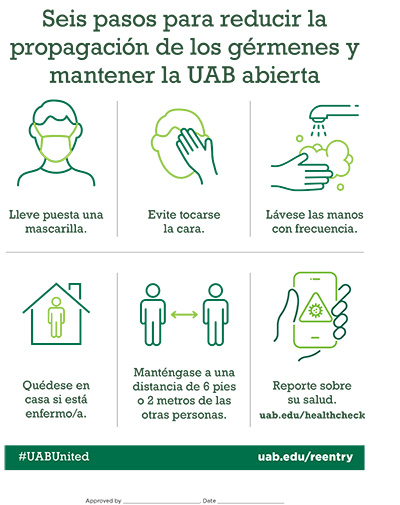 A UAB sign informing readers how to protect themselves and others from COVID-19, translated to Spanish and offered for download to the campus community. With the COVID-19 ordinances frequently changing, groups including the Alabama Coalition of Immigrant Justice successfully petitioned the governor to have that information translated en Español. People getting tested for the virus at hospitals, including laboring mothers, need that information in Spanish as well, Hernandez says. The message, including medical and scientific language, should be simplified and delivered in a way they can understand, such as with a brief video message.

“Our community is not just black and white,” Hernandez said. “I see these disparities every day. We need to pay attention; this is public health, and at the end of the day it affects the whole community. We are part of the community, not an afterthought.”

Guadalupe Meza, who is pursuing a master’s degree in clinical laboratory sciences at UAB, grew up in a Mexican American household in Robertsdale, Alabama. Knowing how to read, write and speak Spanish has given her an advantage in learning medical terminology, as Latin and Spanish have similar roots. Growing up, she was often called upon to help translate for her family, and it opened her eyes, she says.

“I often wondered how other families, who did not have anyone to be their voice, received adequate treatment when in doctors’ offices, or how they communicated basic needs,” Meza said.

She believes it is vital to have health care team members who can speak another language.

“Imagine how much can be done for a patient who needs our help when their needs are being met and they are being nursed back to health because they were understood, heard and valued,” Meza said.