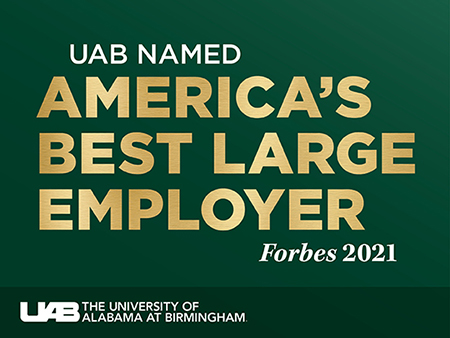 The University of Alabama at Birmingham has been named America’s No. 1 Best Large Employer by Forbes, topping the list of more than 500 public and private corporations, hospitals, universities, Fortune 500 companies and more, across dozens of industries.

Alabama’s largest public employer and home of one of the region’s largest academic medical centers, UAB employs more than 23,000 people across its university and hospital entities, has more than 22,000 enrolled students, and has an annual economic impact exceeding $7 billion on the state.

“We often say our people are what make UAB special,” said UAB President Ray L. Watts. “What makes Forbes’ recognition so meaningful is that it is based largely on whether our employees would recommend UAB to friends and family. Especially after such a challenging year, knowing that our people are proud to be part of the UAB family is eternally humbling and gratifying.

“As UAB celebrates this distinction, I want to recognize everyone at UAB who works with dedication to our vital mission every day,” Watts said. “I also thank the University of Alabama System and our Board of Trustees, whose vision, leadership and continued support have been critical to our growth into a place special enough to be called America’s No. 1 Best Large Employer by Forbes.”

In a year marked by uncertainty and triumphs as UAB navigated caring for hundreds of COVID-19 patients, pivoting research priorities to help advance therapeutics and treatments to fight the pandemic — all while keeping its academic entities moving forward through a fluid hybrid learning approach — employees were provided access to resources such as personal protective equipment, mental health tools and wellness days, and access to assistance resources like food supplementation and child care support, among others. The university is now vaccinating employees within Alabama Department of Public Health requirements.

Methodology for creation of the 2021 list involved Statista’s anonymously surveying 38,000 Americans working for businesses with at least 1,000 employees. According to Forbes, respondents were asked to rate on a scale of zero to 10 how likely they would be to recommend their employer to friends and family, and then encouraged participants to nominate other organizations they do and do not recommend. The final list ranks the 500 large and 500 midsize employers that received the most recommendations.

“UAB has long been known for its extraordinary teams; but to receive this honor in 2021 is even more special knowing how our employees truly came together to overcome challenges, care for our community and state, and provide lifesaving care to patients across all specialties amid the pandemic — it is remarkable,” said UAB Medicine Chief Executive Officer Reid Jones. “In reflection of all we have been able to accomplish together, I am confident that this recognition is just the start of people seeing what truly makes UAB a phenomenal place to work and grow.”

UAB boasts many nationally ranked programs, with 16 graduate and professional programs in the schools of Health Professions, Nursing, Medicine, Engineering, Education, Business and Public Health and the College of Arts and Sciences all ranked in the 2020 U.S. News Best Graduate School Rankings. The Master’s in Health Administration program in the School of Health Professions received the No. 1 ranking as the best in the country.

With annual research expenditures exceeding a record $600 million, UAB continues to create new knowledge and solve critical worldwide issues. UAB is a leader in federal research funding, ranking 20th in the nation in National Institutes of Health funding to climb 11 places on the NIH rankings in the past five years. During that time period, UAB’s total NIH funding rose more than $100 million, topping the $234 million mark in 2018. Only seven other academic medical centers in the United States increased their NIH funding by more than $100 million during that same timeframe, placing UAB among an elite group of eight academic medical centers.

“As UAB celebrates this distinction, I want to recognize everyone at UAB who works with dedication to our vital mission every day,” said UAB President Ray L. Watts.

UAB Hospital, the centerpiece of the UAB Health System, is among the 20 largest hospitals in the United States. UAB Hospital’s American College of Surgeons Verified Adult Level 1 Trauma Center is the only one of its kind in Alabama. UAB Hospital and clinics saw more than a million patient visits last year. The U.S. News & World Report Best Hospitals report listed eight of UAB’s medical specialties in the nation’s top 50 programs of their kind, seven of those within the top 30, along with two others noted as being “high performing” in the 2020-2021 Best Hospital rankings. UAB also has the O’Neal Comprehensive Cancer Center, the only NCI-designated comprehensive cancer center in Alabama and its five-state region.

“To be named America’s Best Large Employer by Forbes and among the company of other organizations on this list is a testament to the exceptional employees we have at UAB — a group of people who are dedicated to moving every pillar of our mission forward and living out our shared values,” said UAB Provost Pam Benoit. “It cannot be overstated the adversities that employees across our campus faced in this pandemic year, and I celebrate this tremendous recognition with everyone in the UAB community.”