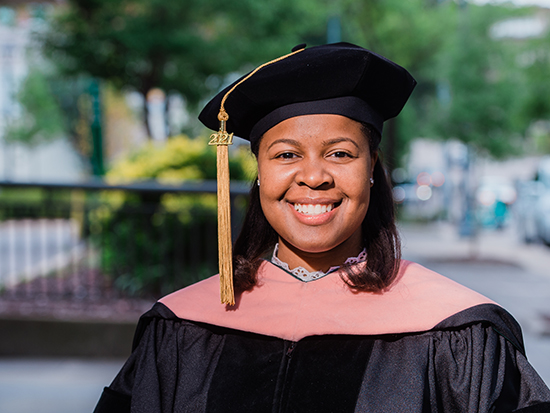 Christina J. Glenn is the first Doctor of Public Health with a concentration in biostatistics graduate from UAB’s School of Public Health.
(Photography: Lexi Coon)“What do you want to be when you grow up?”

It is a simple question every young child is asked. Answers range from astronaut to president or a famous actor. Christina J. Glenn dreamed of being a pianist. However, Glenn’s mother noticed her daughter had a knack for numbers in addition to her musical talents.

Little did they know her mother’s observation would start Glenn on a unique path that would lead her to become the first Doctor of Public Health graduate in biostatistics at the University of Alabama at Birmingham School of Public Health.

While she enjoyed her time teaching, Glenn felt there was more to her journey — a bigger dream yet to be fulfilled. An analytical person, she sat back and weighed her options. What was she good at? What were her ideal career paths? Her answers came down to a common denominator: math.

Glenn once again found herself at UAB working toward her master’s in applied mathematics and joined the Bridge to the Doctorate Fellowship Program. The program, funded by the National Science Foundation, aims to prepare historically underrepresented minority students to complete science, technology, engineering and mathematics doctoral programs. The BD program helped pay for Glenn’s education and offered opportunities that included participating in a variety of research conferences, skills workshops and seminars.

It was at one of these conferences that she met a fellow statistics professor who opened her eyes to the world of biostatistics. Glenn became intrigued with how biostatisticians use statistical reasoning and methods to address major problems in public health. She decided to enroll in a new dream and work toward a Ph.D. in the biostatistics doctoral program at UAB’s School of Public Health.

“I did not realize how different biostatistics and public health was from the math world I was familiar with,” Glenn said. “I found myself in a big adjustment period.”

Glenn attributes surviving the adjustment period to the great faculty, specifically her instructor Stacey Cofield, Ph.D.,associate professor of biostatistics in the School of Public Health.

“She made biostatics tangible and practical for me,” Glenn said. “At first, I struggled to put the pieces together. Dr. Cofield helped me hone my craft and gave me the confidence that I could succeed in this field.”

Not long after joining the program, Cofield approached Glenn about becoming the first student in the new degree program, the Doctor of Public Health in Biostatistics program. The unique program would require doctoral-level applied statistics knowledge and skills, as well as disease- and public health-specific knowledge. Additionally, it required a student with leadership skills, teaching ability and research design experience.

“There was a period when we asked her to join the program that we could see her question whether this was the right path for her by ‘abandoning’ the traditional Ph.D. path,” Cofield said. “The challenge came in accepting that she was not abandoning a dream; she was focusing on a new and better dream.”

Glenn stepped onto her new path dedicated to self-improvement and focused on her attainment of knowledge. The journey was not always easy, and Glenn faced uncertainty; but she learned to have confidence in her abilities. Cofield notes the “well-earned” confidence allowed Glenn to tackle research problems and shape her own educational path where others have typically shied from or stepped away. 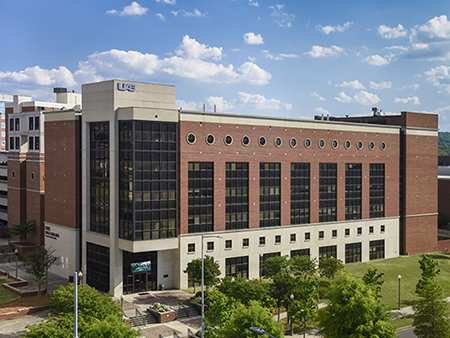 UAB Ryals Public Health Building
(Photography: Bruce Southerland)Glenn has not only a passion for numbers but also one for mental health. She decided to combine the two for her dissertation, which focused on depression in people with multiple sclerosis, a disease where the immune system attacks the protective sheath around nerve fibers and causes communication problems between the brain and the body. Glenn hoped her research would provide a better look on how depression can impact a person’s overall health outcome.

“Being able to use advance statistical methods to tell a story and then relate it back to the bigger picture of mental health made me feel like a rock star,” Glenn said. “It is satisfying to know that the work you are doing is improving knowledge in public health and closing gaps that exist between what we currently know and what we are trying to figure out.”

Six years after joining the program, Glenn will graduate as UAB’s first Doctor of Public Health in biostatistics.

“She has embraced all aspects of this journey and has become a sought-after graduate,” Cofield said. “There is no better flag-bearer for the program.”

While it may not be the music studio her younger self once dreamed of, Glenn now finds herself setting up her new office as an assistant professor of nursing at the University of Alabama.

“Being able to teach biostatistics and provide the same level of expert knowledge my instructors at UAB provided me is an absolute dream come true,” Glenn said. “When I began my journey, there was a saying on campus — ‘UAB: Knowledge that will change your world.’ The saying rings true, because I did find knowledge that changed my world in the best way imaginable.”