Live HealthSmart Alabama is expanding its footprint throughout the Birmingham area and will extend its model beyond Birmingham to other Alabama communities.
Written by: Anne Heaney
Media contact: Adam Pope 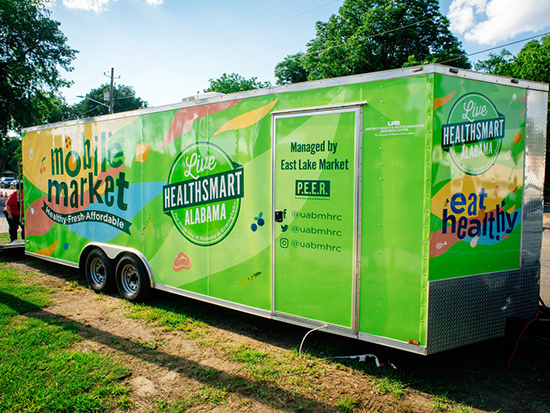 Live HealthSmart Alabama is expanding its footprint throughout the Birmingham area and will extend its model beyond Birmingham to other Alabama communities.
(Photography: Steve Wood)The Live HealthSmart Alabama Mobile Market provides healthy, fresh and affordable food to neighborhoods with limited access to traditional grocery stores. This grocery store on wheels has expanded its service area to four new communities. Joining the original market stops in Kingston, Bush Hills, East Lake and Titusville are new locations in Norwood, Fountain Heights, Tarrant and Bessemer.

“The Mobile Market provides fresh food to people who do not currently have access to a grocery store,” said Mona Fouad, M.D., chief executive officer of Live HealthSmart Alabama and director of the UAB Minority Health & Health Disparities Research Center. “And while it’s been successful in Kingston, Bush Hills, East Lake and Titusville, we didn’t want to limit our reach. Expanding to other food deserts gives more people more access to nutritious food, which down the line will create a greater impact on their health.”

Live HealthSmart Alabama is expanding its footprint throughout the Birmingham area and will extend its model beyond Birmingham to other Alabama communities.

“To reach our goals of decreasing the incidence of obesity, diabetes, high blood pressure and high cholesterol, a statewide effort is needed,” Fouad said.

Fouad also adds that the newest additions to the schedule were targeted areas where members of the community had expressed need for collaborative action to change or to improve the built environment and systems that support their daily lives. 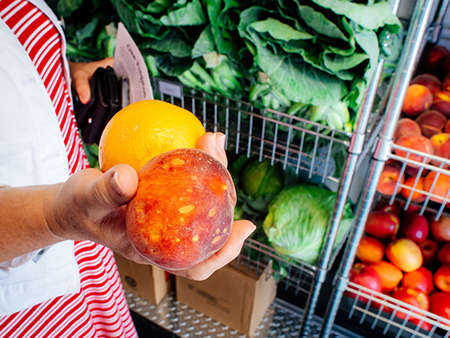 (Photography: Steve Wood)The Mobile Market will visit each of the new locations, along with the original four locations, every other week. Once a month, each location will have an evening market, which gives shoppers expanded shopping hours.

“Having a set market schedule can be tricky for customers who might not be able to make it to the market at one set time,” said Teresa Shufflebarger, MBA, MHA, chief administrative officer for Live HealthSmart Alabama. “The evening markets create more opportunities for shoppers to show up. We want to provide as many chances for people to shop as we can.”

The evening markets also include a cooking demo from a local chef, where shoppers will see produce from the market turned into a healthy and delicious meal in front of their eyes.

“Offering access to the fresh foods was one step; but to take it even further, we wanted to offer advice and guidance about how to actually use the produce,” Shufflebarger said. “If someone does not know how to cook with vegetables, they probably won’t eat them.”