A new stand for the Mace: How a Blazer’s family tradition gave new life to a UAB icon 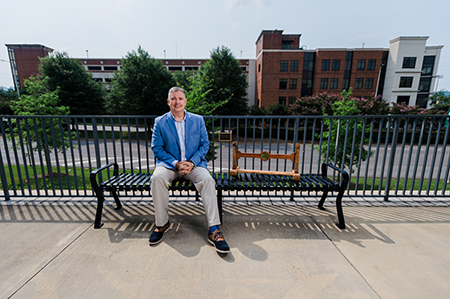 Jamey Worrell still has all 10 fingers, just as his father wanted.

A fourth-generation woodworker who by age 27 was the foreman for Baton Rouge, Louisiana’s largest custom millwork shop, Barney Earl Worrell could make nearly anything out of wood, says son Jamey. During his decades in the trade, however, Barney had seen his friends and family lose arms and fingers to machinery and his own father break his back falling from scaffolding on a job site. Barney himself was crushed by a table at age 35, leaving him with permanent nerve damage in his lower extremities. To him, woodworking paid the bills, but often at too high a price.

“Growing up, woodworking was something I was around; but my father wanted me nowhere near it,” said Jamey Worrell, Ph.D., professor of accounting. “In his mind, I think he wanted to break the cycle. My upbringing was that, when I’d go into his shop, he’d point at a piece of equipment and say, ‘You see that? That’s a surface machine. It’s good for cutting fingers off.’”

So rather than go into the family trade, Jamey earned a bachelor’s degree in accounting and master’s in accounting information systems. He worked for more than a decade in public accounting and consulting, then earned his doctorate in management information systems from Florida State University in 2008. Next, he landed a gig in what is now the University of Alabama at Birmingham’s Collat School of Business Department of Accounting and Finance. It was only when Barney realized his son, then in his 30s, would never take up woodworking professionally, that he offered to teach Jamey the craft.

Jamey learned from his father for around six years before his father’s death in 2011. Barney’s commercial-grade millwork shop at the family property in Chattahoochee, Florida, is home to machinery that can cost upward of $10,000 apiece — “not stuff from Home Depot,” Jamey jokes, and it was there that he was instructed.

His father could have made anything in that shop, he says — dining sets, bedroom suites, kitchen cabinets, jewelry boxes. But the newest item crafted there will not hold cups and plates or costume jewelry, but rather one of the university’s most iconic emblems: the UAB Mace. 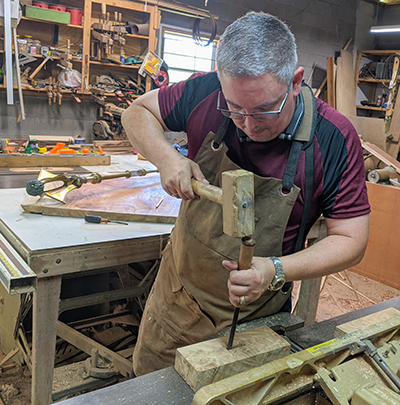 The UAB Mace is one of UAB’s most recognizable icons. Carried into each commencement ceremony by a faculty member, the 4-foot-long mace weighs more than 10 pounds. In recent years, the mace has rested on a cabinet in the Office of the Provost for Student and Faculty Success or on a table during commencement ceremonies; but during Jamey’s 2018-19 stint as chair of the UAB Faculty Senate, Provost Pam Benoit approached Jamey about crafting a new stand. His woodworking hobby had become well-known among administrators. So, he set to work creating.

Jamey constructed the stand from specific selections of lumber: Each piece is sourced locally from trees felled either on UAB’s campus or elsewhere in the Birmingham community and is symbolically representative of UAB’s best qualities — much like the mace itself, which is made of brass, bronze and stainless steel as a nod to Birmingham’s history in iron and steel production.

“The creative side of me wanted to use wood that had some symbolism and represented who we are as a university,” he explained.

When white oak trees were razed to make way for University Hall construction in 2017, UAB Facilities saved the best pieces of lumber, just in case. Oak represents strength, so Jamey used those pieces for the stand’s base and connecting cross pieces. Then, he collaborated with local urban timber woodworking business Alabama Sawyer, which mills lumber from trees felled around Birmingham, kiln-dries and sells it to prevent it from going to the landfill. From there, he chose local hickory for the feet, which represents resiliency; elm for the side cradles, representative of knowledge; and cherry, which represents passion, for the piece linking the side cradles. The official UAB seal is inset into the cherry.

Each piece of lumber Jamey started with was live-edge, and most were 8-10 feet wide and several inches thick. As Jamey selected the best portions from each slab and assembled the stand throughout several visits over the span of about nine months to the workshop on his family property, he worked to channel Barney’s natural creativity using the skills he learned alongside him — with a bit of help from YouTube videos along the way, he says.

“It was an opportunity to have a great conversation with Poppa while working on this. It’s all one-sided, and he isn’t talking back; but I imagine there’s a part of him that’s smiling, happy that we’re using his equipment for this,” Jamey said.

Carrying the mace at commencement is a high honor for a faculty member, so to have the mace built by a professor is a testament to the shared governance relationship between UAB’s administration and faculty, Jamey explains.

“Faculty are such an important part of this university — they’re the lifeblood of an academic institution,” he continued. “I think it’s something that, among many things, makes UAB unique and special.”

“That the new mace stand was made by a faculty member really demonstrates the spirit and mission of UAB,” said Provost Pam Benoit. “Our faculty invest themselves not only in sharing knowledge with students, but also in sharing what it means to be a part of the Blazer community. They truly enhance the entire UAB experience with their dedication and talent and make our students’ time here all the more meaningful.” 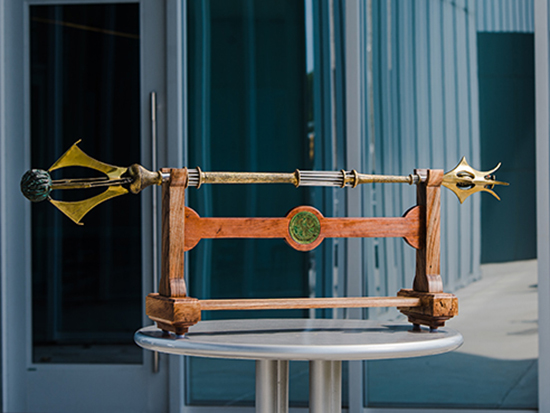 Photography: Andrea Mabry and Lexi CoonCrafting the mace stand has provided an opportunity for the Worrell family’s woodworking legacy to continue — with Jamey’s 9-year-old son, Alexander James. AJ has an artistic spirit, Jamey explains, and enjoys painting. Much like his own father, Jamey is not keen to see his son take on woodworking for a living, but still hopes to instill in him the skills and appreciation for the craft, including relief woodcarving, which Jamey has taken up recently. The Worrells are planning to relocate Barney’s shop to their 8-acre property in Trussville within the next few years.

Jamey says he wrapped up the project around July 14, which would have been Barney’s 72nd birthday, and believes his father would be proud he is continuing the family trade in such a meaningful way — and maybe a bit irritated, if only from worry.

“My dad was very proud of my being a member of the faculty here,” Jamey explained. “But he died not being able to read a newspaper. He cheated off my mother to graduate from high school. He was brilliant, how he could fit things together spatially and geometrically, and he told me that, as long as I was going to school, there was a roof over my head and a warm meal in my belly. Education was paramount in our family.”

Outside of his role on faculty, Jamey says UAB has long played a big role in the Worrell family. Before his death in 2011, Barney underwent treatment at UAB for aggressive brain cancer — Jamey says he remains in contact to this day with the physicians who cared for his father. One of Jamey’s uncles was treated for pancreatic cancer at the Kirklin Clinic, and a cousin with cystic fibrosis received a successful lung transplant at UAB.

“UAB has been great for our family,” Jamey said. “I can’t think of anywhere else I’d rather be.”

The new mace stand made its debut Summer 2021. 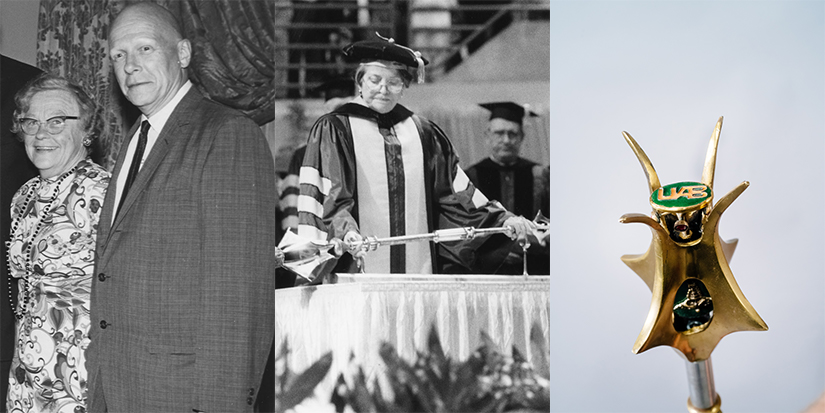 Clockwise: The UAB Mace is a work of art, commissioned by Sam Barker, Ph.D., right, first dean of the UAB Graduate School, and wife Justine, left; it debuted at the June 1989 commencement, where it was carried by Virginia Horns-Marsh, Ph.D., pictured, professor of education; the three medallions on the mace feature the lamp of knowledge, the caduceus — the traditional symbol of the physician — and the UAB logo; Alabama sculptor Cordray Parker created the mace with help from Heidi Bowman on the enameled medallion. Parker also sculpted other works on campus, including “Tinsley Harrison” and “Charles A. McCallum,” both on the north side of University Boulevard between 19th and 20th streets south.

Jamey opted to make sparing use of stain on the mace stand, instead letting the natural wood grains shine through almost a dozen coats of hand-rubbed Tung oil. One of the pieces of white oak he used has spalting in it — a form of wood discoloration from fungi or bacteria that forms black, string-like lines — that Jamey likens to the petri dishes used in UAB’s research labs.

Jamey used the countless tools in his father’s commercial-grade millwork shop to build the new mace stand. His mother, Betty, often snapped photos of him while he worked. Jamey says she did not mind the mess: “When I’d come in her house, I used to try to brush the sawdust off me. She told me, ‘I’m a woodworker’s wife — don’t brush it off. It seems right to have sawdust in the house again.’”