Maria Rodriguez Shirey, Ph.D., will transition into her new role as the dean of the UAB School of Nursing effective June 1.
Written by: Linda Gunter
Media contact: Hannah Echols 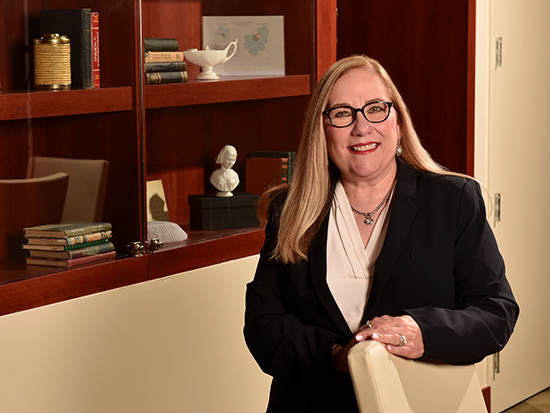 “Dr. Shirey’s work within the university, the community and the world at large is a testament to her abilities to lead this ever-growing school,” said UAB Provost and Senior Vice President of Academic Affairs Pam Benoit. “We are confident that she will continue to propel the world-class academic, research and clinical enterprises in the School of Nursing.”

Shirey will transition to her new role June 1, succeeding Dean Doreen Harper, Ph.D., holder of the Fay B. Ireland Endowed Chair in the School of Nursing. Harper announced her intent to retire April 30, 2022 in fall 2021. Benoit thanked Harper for her service, calling her a driving force of positive change who elevated the success and reputation of the school in her 17 years as its leader.

“Dr. Harper’s vision for the School of Nursing has brought international acclaim to UAB and its community and has produced countless nurse leaders who continue to transform health care,” Benoit said.

“As we are a Health Promoting University, it is essential that our leadership embraces the challenges of advocacy for local and global well-being, and we are fortunate to have a demonstrated champion in Dr. Shirey,” said UAB President Ray Watts.

Shirey, a tenured professor of nursing at UAB since 2013 who is board certified in advanced nursing executive practice and health care management, is eager to assume her new role as the fifth dean in the school’s more than 70-year history.

“I have been privileged to work with and among the nursing faculty, staff and students at UAB for nearly a decade, and I am ready to build on our academic, clinical and research excellence and nurture an environment for developing nurse leaders that is welcoming and inclusive,” Shirey said.

She also has held several other administrative leadership positions in the school, including as one of its leaders of diversity, equity and inclusion initiatives. In the clinical realm, Shirey was the founding director for the nurse-led Heart Failure Transitional Care Services for Adults Clinic at UAB Hospital in 2014 and continues to consult with its executive leadership.

“As we are a Health Promoting University, it is essential that our leadership embraces the challenges of advocacy for local and global well-being, and we are fortunate to have a demonstrated champion in Dr. Shirey,” said UAB President Ray Watts.

Her current roles include co-leadership of philanthropic grant processes for community-based projects in the school and interim co-director of the PAHO/WHO Collaborating Center for International Nursing.

Shirey’s areas of scientific focus are on leadership science and health services outcomes research across the health care continuum. Since joining the UAB School of Nursing in 2013, she has extended her leadership and health services outcomes research focus and funding to test the efficacy and comparative effectiveness of interprofessional collaborative practice care delivery models advancing access to care, population health, care transitions and health equity addressing disparities in vulnerable populations with chronic diseases in urban and rural community settings. For her career contributions to advancing leadership and health systems science, Shirey was recognized in 2019 by the American Organization for Nursing Leadership with the Nurse Researcher Award.

Shirey is a senior scientist in two university-wide centers—Minority Health and Health Disparities Research Center, and the Center for Outcomes and Effectiveness Research. She also serves on the leadership committee of Live HealthSmart Alabama, winner of UAB’s first Grand Challenge competition, which is a key component of UAB’s strategic plan, Forging the Future.

Shirey’s service extends beyond the school to the university and its health system. She has had an integral role as a leader of the UAB Nursing Partnership and is a member of the new university-wide Community Engagement Council and the UAB/St. Vincent’s Urgent Care Alliance Taskforce. Her work in the community currently includes an advisory role with the Nurse Family Partnership of Central Alabama.