Otulanas give $1 million to support international and underrepresented students

After receiving monetary support to continue his education at UAB, Shegun Otulana and his wife, Mary, want to pay it forward to future UAB students.
Written by: Rachel Burchfield
Media contact: Savannah Koplon 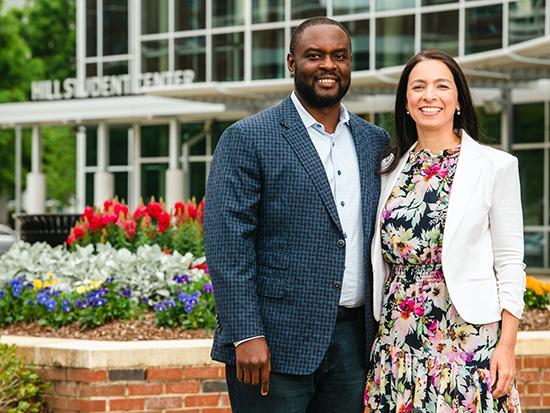 In 1998, entrepreneur Shegun Otulana arrived in Birmingham from his native Lagos, Nigeria. He followed his older brother to the University of Alabama at Birmingham, but found scholarships for international students hard to find — and even harder to find as a student coming from West Africa.

As a student at UAB studying management and information systems in the Collat School of Business, Shegun struggled to pay his tuition some semesters. After his younger brother also chose to attend UAB, their parents were at different times paying three international students’ tuition — more expensive, even, than out-of-state tuition. Many international students could not qualify for scholarships offered because they were not yet United States citizens. Shegun put his college tuition on credit cards and delivered pizzas to make ends meet. One semester, he just could not afford tuition, so a friend of his, a doctor at UAB, paid it instead. It was the only way he was able to continue his education — and he never forgot that kindness.

After graduating from UAB in 2003, Shegun founded his first startup, Zertis, in 2004 and then founded another company, TheraNest, in 2013. In May 2021, he sold TheraNest’s parent company, Therapy Brands, to global investment firm KKR reportedly for $1.2 billion — a long way from the days when Shegun delivered pizzas to earn a degree from UAB.

Investing in the next generation

Now, Shegun says, it is time to give back and invest in students, just as someone once invested in him. With wife Mary — whom he met while an undergraduate at UAB and who is an accomplished forensic accountant and entrepreneur in her own right — the Otulanas gave $1 million to create the Shegun and Mary Otulana Endowed Scholarship.

“It’s a driving force for us — there are certain areas we believe in strongly as a family, and one of those is education,” Shegun said. “There is a big challenge around affordability of education in college. We feel these scholarships can help resolve that.”

Each year, the scholarship will provide tuition for:

“Through their generous gift, the Otulanas have demonstrated the important role alumni play in shaping UAB’s future,” said Tom Brannan, UAB’s vice president for Advancement and Strategic Initiatives. “We are grateful for their support of both international students and underrepresented students through the creation of this transformational scholarship, which will help cover the cost of their tuition. Their gift will help generations of students earn a college degree, and we are grateful for their generosity, vision and loyalty to UAB.”

The first two recipients of the scholarship will be awarded in fall 2022. After the initial scholarships are awarded, two new students — one in each category — will be added every year to amount to a total of eight student recipients supported by the 2024-2025 school year.

“Education is a priority for our children and others,” Mary said. “The more knowledge you gain, the more opportunities will follow. And that’s something every child, regardless of their circumstance, is deserving of.”

The Otulanas’ decision to focus on international students is deeply personal to them, as this is “a segment of the population that really struggles when they get here,” Shegun said. “We know these students are very, very smart. When they get a break, they do great things in this country. How many are we leaving behind who get here and can’t finish and afford tuition? [International students] contribute to the story and success of this country. [We will do] whatever we can do to give them a leg up.”

As UAB welcomes more and more international students, the Otulanas’ gift is a welcome one, says David Hofmann, executive director of INTO UAB, an initiative aimed at increasing the global diversity of the student body.

“UAB has always welcomed international students from around the world,” he said. “As our international population grows, the Shegun and Mary Otulana Endowed Scholarship will only help to fulfill the university mission to be a top-tier global institution. Many Nigerian students will benefit from this scholarship and the quality education UAB provides.”

A family of Blazers

Though the Otulanas give generously to many causes close to their hearts, UAB is particularly special to them because it is not only where both received degrees and where they met, but is a critical part of Birmingham, where they have chosen to plant roots and raise a family, and where so many of their family members shared years of their lives, too: Shegun’s older and younger brothers attended UAB, Mary’s sister is a fellow graduate and former president of the National Alumni Society, and both of Mary’s parents are longtime professors at the university and have had notably influential careers at UAB. Mary’s father, Fouad H. Fouad, Ph.D., retired this past July after 40 years on the faculty in the School of Engineering and 25 years as chair of the Department of Civil, Construction and Environmental Engineering. Her mother, Mona Fouad, M.D., is senior associate dean for Diversity and Inclusion in the UAB Heersink School of Medicine and professor and director of the UAB Division of Preventive Medicine. She is also the founding director of the UAB Minority Health and Health Disparities Research Center and leads UAB’s Grand Challenge, Live HealthSmart Alabama.

Their whole family, they say, are Blazer fans and find joy in seeing UAB thrive. As a student here, Shegun was deeply involved in international programs at UAB, specifically the Smolian International House. Because of his connections, the couple is looking to expand giving to UAB in this realm, too.

“You have an obligation to two things in life: the people around you and the places where you find yourself,” Shegun said. “You have the obligation to leave both of those things better to the extent you can. UAB is critical to the future of Birmingham. So, for international students who come here, whatever we can do as part of our giving to elevate this place is one of our responsibilities.”

Both Shegun and Mary were raised to be givers. Mary says it is their credo that, when you see someone facing a struggle and you know there is something you can do, you step in and do it. When it came to giving to students who are struggling to pay tuition at UAB, the couple did not hesitate in giving back.

“Everyone can be a giver,” Shegun said. “When you’re in a position to be a giver, you have an obligation that is, for us, driven by our faith and our responsibility as humans to lift other people up. It’s not a complete life if it’s a life that only consumes and doesn’t lift up others. That’s not a full life. Many people gave for us to get to where we are. Part of our obligation is to continue that. We also want to raise a family who considers giving as a core value — and you show that by example.”

Since exiting Therapy Brands last year, Shegun has gone on to found Harmony Venture Labs in Birmingham to support the development of new technology platforms, an idea hub driven by his passion to have more startups and more founders in the Magic City. Mary runs one of the Otulanas’ philanthropic efforts, the property management company Blight Free Birmingham, founded in 2019 to reduce blight in underserved neighborhoods throughout the city. The company purchases abandoned homes, renovates them and rents to families who may not otherwise be able to afford a home through a rent-to-own program. The company educates them about homebuying, how to increase their credit and how to save, with the goal of the renters’ eventually becoming owners of the home they live in.

“We hope [the scholarship] translates into their doing really great things in the future and continuing the journey and coming back and impacting other people’s lives, writing a positive story about what it means to have African ancestry,” Shegun said. “This is not just about your being able to pay your tuition. It’s about being able to have an impact in life, whatever way that is.”