by Savannah Koplon
Supporting on-campus housing for Birmingham Promise scholars would enhance the well-rounded collegiate experience students aim to receive while at UAB. 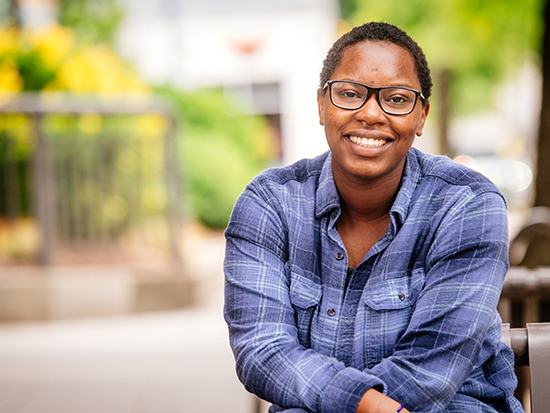 Akera White first heard about Birmingham Promise when she was a student at Ramsay High School, a part of Birmingham City Schools. She heard murmurs in the hallways and from peers about scholarships that could be available to students to get financial help with college tuition and was encouraged to learn more about what could be possible as she embarked on her collegiate journey.

“I wasn’t sure where my collegiate pursuits would take me, and as a resident of Birmingham my whole life, I literally grew up behind UAB,” White, a now rising sophomore at the University of Alabama at Birmingham, recalled. “I had not really considered UAB as a place to invest my four years in; but with the help of receiving the Birmingham Promise scholarship, it was clear that I was meant to be a ‘homegrown Blazer.’”

Importance of the full college experience

While this scholarship is no doubt life-changing and awards Birmingham City Schools students a tremendous opportunity to pursue higher education, many Birmingham Promise scholars like White have to seek additional loans to cover supplemental costs such as on-campus housing fees, something that can significantly impact the well-rounded collegiate experience students hope to receive during college.

“With the help of receiving the Birmingham Promise scholarship, it was clear that I was meant to be a ‘homegrown Blazer.’”

“For me, living on-campus was always something that I was determined to do. It’s been life-changing,” White said. “Living in Gold Hall has allowed me to meet new people, get an independent living experience, and have easy access to my classes and all that campus has to offer — the on-campus living experience is something I feel is essential for all students if they have the option.”

As UAB is about to welcome its third cohort of Birmingham Promise scholars in fall 2022, attracting new support for students to have the opportunity to live on campus is a top priority for UAB leaders.

In order to qualify for the Birmingham Promise scholarship at UAB, Birmingham City Schools students must:

• Be eligible for UAB admission, which for fall 2023 is a minimum 2.75 GPA. Learn more about admission requirements at UAB at uab.edu/admissions.
• Be admitted to UAB as a first-time, full-time freshman in the fall semester of the academic year immediately following their high school graduation.
• Complete the FAFSA form and UAB application by Dec. 1, 2022.
• Complete a Birmingham Promise application by June 1, 2023 (applications can be found at birminghampromise.org).

The Birmingham Promise scholarship at UAB will cover tuition for full-time study at UAB. To maintain eligibility, a student must be enrolled at UAB full time and demonstrate progress toward a degree by passing 67 percent of hours attempted and maintaining a GPA of 2.0 or higher.

“Birmingham Promise is all about opportunity — I want these students to have the same opportunities I want for my own children, which are to be able to build relationships by living alongside a diverse group of students, spending the wee hours in the library, or in the Student Center running into faculty and peers at lunch,” Emily Wykle, director of External Affairs in UAB’s Office of the President. “Research shows that those things help students succeed in college, and so we want to make sure we are equipping Promise students to be successful, because it’s not about getting to college — it’s about getting through college.”

With a declared major in genetics and genomic sciences, an interdisciplinary major between the Department of Genetics in the Marnix E. Heersink School of Medicine and the Department of Biology in the College of Arts and Sciences, White feels that it was serendipitous to be able to explore her academic passions at a place like UAB with resources unmatched at other academic medical centers, but conveniently in her backyard. Her experience at UAB has been amplified by her ability to live on campus and connect with professors and peers, something she hopes those interested in supporting Birmingham Promise can understand.

“I want others to know that an investment in Birmingham Promise scholars is not an investment wasted. Bringing an off-campus student on campus is eye-opening to what they are missing and would transform their education,” White said. “As a student, you need designated space to be a college student — a buffer before we get to the real world — and the buffer of on-campus housing is a steppingstone to help students get the full college immersion, for us to excel academically and to become members of society one day.”