UAB to celebrate commencement May 12

by Jim Bakken
UAB will present Malcolm Portera, Ph.D., former chancellor of the University of Alabama System, with an honorary doctor of humanities degree.

The University of Alabama at Birmingham spring commencement will be conducted in two ceremonies Saturday, May 12, 2012, in Bartow Arena, 617 13th Street South. There will be 2,652 students eligible for graduation. 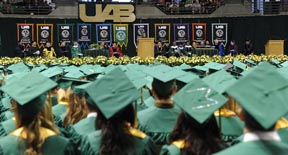 Ceremonies for the College of Arts and Sciences and the School of Education will begin at 9:30 a.m.; commencement for the schools of Business, Engineering, Public Health, Health Professions, Medicine, Dentistry, Nursing and Optometry will begin at 2 p.m.

For those who are unable to attend, UAB will stream the spring commencement ceremonies at www.uab.edu/commencementlive.

Malcolm Portera, Ph.D., the former chancellor of The University of Alabama System, will be awarded an honorary doctorate of humanities during the morning service. Portera has been widely recognized as a leader in higher education during a career that spanned three decades.

John Chatham, Ph.D., chair of the faculty senate and a professor in the Department of Molecular and Cellular Pathology, will be the mace carrier for both ceremonies. Undergraduate and graduate students will give the commencement addresses at each service.

The doctoral hooding ceremony will be held at noon in UAB’s Alys Stephens Center, 1200 10th Ave. South. Rosa Serra, Ph.D., professor of cell biology and director of the cancer biology graduate program in Graduate Biomedical Sciences, will be the speaker.

Graduating senior Ashley Michelle Jones of Birmingham will deliver the undergraduate commencement address. She will receive a bachelor of arts in English with a concentration in creative writing and a minor in Spanish. Jones participated in the University Honors Program, the Multicultural Scholars Program and the English Honors Program. She received the Virginia B. and William M. Spencer III Scholarship, a four-year academic Green and Gold Scholarship and a four-year Diversity Supplement Scholarship.

Jones plans to pursue a master of fine arts in poetry at Florida International University where she has received a McNair Fellowship. She plans to teach English and creative writing at the college level and eventually become a university administrator. Her parents are Mr. and Mrs. Donald Jones.

Francisco “Frankie” Enrique Perez of Caracas, Venezuela, will give the post-baccalaureate commencement speech. He is graduating with a master of arts in education.

Perez is fluent in Spanish and English and has been an instructional bilingual aide at Thompson High School for four years. He has also been active in tutoring English Language Learner students in math and science during their inclusion classes. Perez plans to become an English as a Second Language teacher. He is married to Stephanie Danielle Perez of Hoover.

Jafon Fearson of Hatchechubbee, Ala., will deliver the undergraduate commencement speech. He is graduating with a bachelor of science in biomedical engineering. Fearson has been the recipient of a UAB National Alumni Society Scholarship and has been named on the President’s List. He is president of the Iota Nu chapter of Alpha Phi Alpha Fraternity Inc., a Black Male Excellence Network mentor and a tutor/mentor for the UAB Trio Academic Services program.

Fearson plans to attend the University of Missouri-Columbia School of Law to study intellectual property with a focus on research integrity. His parents are Shirley Fearson of Hatchechubbee and Darwin Lipscomb of Seale, Ala.

Beek is a member of the National Society of Genetic Counselors. He was selected to present his graduate research project at the annual UAB Graduate Research Day and was awarded first place. He plans to pursue a career in genetic counseling. His parents are Sherwood Beek and Kristi Devick-Beek.