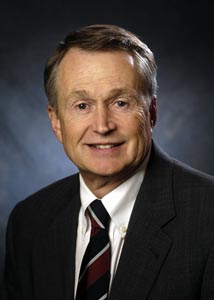 “An accomplished scholar, researcher and administrator, Marchase has helped build UAB’s global stature over the last 26 years,” Witt said. “On behalf of the board, I want to thank him for agreeing to lead the university while we undertake the search for a permanent president.”

“I am honored and delighted to be asked to serve in this interim role,” Marchase said. “We are on a great trajectory at UAB in every area — our medical school and health system, our research enterprise, our undergraduate and graduate education and our partnerships with the community. We have a strong leadership team in place and we will absolutely not miss a beat in pursuit of our goals.”

Marchase joined the UAB faculty in 1986 and has risen steadily through the ranks to his current position as Vice President for Research and Economic Development, which he assumed in 2005.

In that capacity, Marchase has played a key role in expanding UAB’s efforts in research, technology transfer and economic development. He chairs the board of the Innovation Depot, the business incubator affiliated with UAB; oversees the UAB Research Foundation; and coordinates UAB’s efforts with the Alabama Development Office, Economic Development Partnership of Alabama, Birmingham Business Alliance and others. He also is charged with facilitating strong relationships and collaborative efforts with research groups and other universities within the state.

Marchase received his bachelor's degree in engineering physics from Cornell University and his doctorate in biophysics from Johns Hopkins University. After completing post-doctoral training he began his academic career at Duke University. He was an initial recipient of the Presidential Young Investigator Award from the National Science Foundation.