The number of freshmen attending UAB has increased 31 percent over five years; the university has 17,999 total students attending this year.

For the fourth consecutive year the University of Alabama at Birmingham has reached record enrollment, with combined undergraduate and graduate enrollment of 17,999 students. 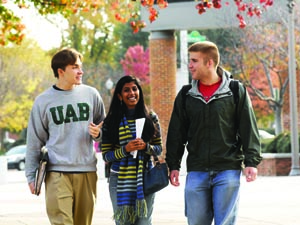 Students are attracted to UAB for many reasons, including the university’s numerous honors programs, the opportunities to participate in research as an undergraduate, the location in Alabama’s center of commerce and the increasing appeal of the campus.

In addition, the average ACT of the incoming class increased to 24.5, with the mean high school GPA reaching a new high of 3.54.

The total number of residential students at UAB has grown to nearly 2,300. This is the largest residential population UAB has ever had, a record the university has broken for seven straight years. First-time freshmen living in on-campus housing number 1,156.

This year 68 percent of the incoming freshmen live on campus, a record number, and 98.9 percent of those are full-time students.

In the last year UAB was among only 11 universities nationally to earn the coveted Beckman Scholars Program Award for exceptional mentoring and training of undergraduate researchers. UAB had 14 graduate programs in the top 25 in U.S. News & World Report’s “Best Graduate Schools,” with the master’s in health services administration program at number 5. UAB’s postdoctoral experience ranked first nationally among public universities in The Scientist’s “Best Places to Work as a Postdoc.”