“The man who brought down a dictator” to speak at UAB

Founder of the youth movement that helped bring change to Serbia will speak Oct. 18. 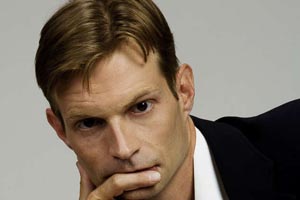 Srdja Popovic, co-founder of a 70,000-member Serbian youth movement that toppled dictator Slobodan Milosevic, will give the Fourth Annual Rushton Lecture at 7 p.m. Thursday, Oct. 18, 2012. The free event is open to the public and will be held at the Hill University Center Alumni Auditorium, 1400 University Boulevard.

Popovic, named one of Foreign Policy magazine’s Top 100 Global Thinkers, will speak on “Rediscovering National Identity in the Popular Democracy Movement.” He is best known for the 1998 nonviolent protests he and his friends staged using street theater, pranks and simple messages. After that victory, Popovic and Slobodan Djinovic created the Centre for Applied Non-Violent Action & Strategies, or CANVAS, in 2000.

Today, Popovic teaches a new form of protest with hopes of creating peaceful revolutions. He travels around the world to train activists from Egypt, Tunisia and Lebanon, among others.