Long a mainstay of medical schools, the ceremony emphasizes responsibility to patients. 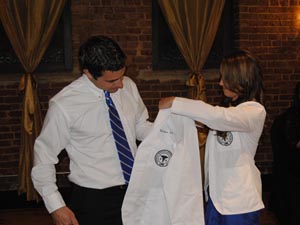 It was a memorable moment for Nolan Renner, a first-year Surgical Physician Assistant student at the University of Alabama at Birmingham. His wife, Kayla, a second-year SPA student, presented him with his first white coat on Oct. 5, 2012. It also happened to be the very first SPA White Coat Ceremony for the UAB program, held at historic Woodrow Hall in Birmingham, followed by the Second Annual PA Fall Ball.

Each of the 57 members of the Class of 2014 was presented with the traditional short white coat by a member of the Class of 2013 in the presence of family, friends, faculty and staff. The white coat is one of health-care’s most important symbols, signifying that a practitioner’s responsibility is not only to treat patients, but to also care for that patient’s well-being.

The first-year students will begin their training in a clinical setting in January 2013. They will obtain medical histories from patients and perform physical examinations throughout the spring semester. The students recited the Pledge of Professionalism to affirm their loyalty to the profession of medicine and dedicate their life to the service of humanity and practice by putting patient considerations first.

The idea for the ceremony was sparked by Kristopher Maday, M.S., assistant professor in the PA program. 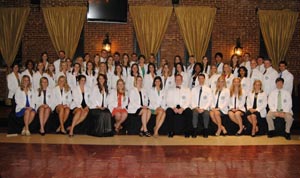 “The white coat ceremony is a ritual of initiation, not culmination,” says Maday. “I wanted to have something that made the students the focal point. This was their time to shine and be recognized for their achievement in making it to this point in their academic careers. The majority of the first 18 months of their education is spent in the classroom; this ceremony signifies a rite of passage into the clinical arena. It is the program’s way of welcoming our students into the brotherhood of medicine.”