UAB student named a finalist for the Rhodes scholarship

University of Alabama at Birmingham senior Mallick Hossain, of Gadsden, has been named a finalist for the prestigious Rhodes Scholarship. 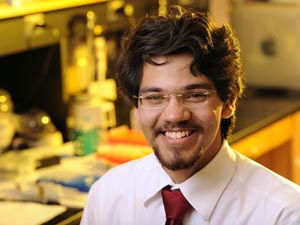 The Rhodes Scholarship is “the oldest and most celebrated” international fellowship award in the world, according to its website. Each year, the website explains, 32 recipients are selected “not only for their outstanding scholarly achievements, but for their character, commitment to others and to the common good, and for their potential for leadership in whatever domains their careers may lead.” Awardees receive full financial support to pursue a degree at the University of Oxford in the United Kingdom.

Hossain, a 20-year-old math and philosophy double major, will participate in interviews with other finalists in UAB’s three-state region on Nov. 15-16, 2012. The winners of the 2013 Rhodes Scholarships will be announced on the weekend of Nov. 17-18.

“I am just so overjoyed and excited about this experience,” he says.

Hossain has a long list of achievements. He has studied at the London School of Economics, was named a Teach for America Rising Leader, and is a member of UAB’s award-winning ethics bowl team, a Goldwater Scholar and former Mr. UAB.

He is also a principal second violin in the Alabama Symphony Youth Orchestra and has conducted research on breast cancer and leukemia.

Hossain hopes to combine his interests in medicine and business in a health economics career. If selected to study at Oxford, he would spend his first year pursuing a Master of Public Policy degree in the Blavatnik School of Government. During his second year, he would pursue a Master of Science degree in financial economics through the Saïd School of Business.

Hossain knew he’d find out his fate with Rhodes soon and was anxious to get the news. But when an email popped up in his inbox, he was reluctant to open it, he says. It was lunchtime, so he told himself that he wanted to enjoy “one last meal” before finding out.

He eventually clicked on the email and learned that he had made the finals.

“I screamed, high-fived and gave my roommate a hug,” he says. He also ran throughout the math office and across campus thanking his recommenders.

“I was so overwhelmed and happy,” he says. “I stayed on cloud nine for a while.”

“He was really helpful,” Hossain says. “His biggest piece of advice was to ‘Be yourself and enjoy the opportunity.’”

UAB has been a source for invaluable mentors and professors who “set the bar high” and “have pushed me along the way,” Hossain says.

UAB has had two Rhodes scholars and, after next weekend, Hossain hopes to add his name to the list, he says.

His parents are Sajjad and Monika Hossain.