by Shannon Thomason
More than 800 students will participate in UAB’s fall commencement ceremony, which will take place at 2 p.m. Saturday, Dec. 15, at Bartow Arena.

The University of Alabama at Birmingham (UAB) will celebrate the success of hundreds of students with a doctoral hooding convocation and commencement ceremony on Saturday, Dec. 15, 2012. 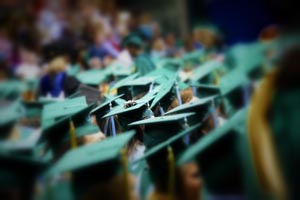 The UAB Graduate School doctoral hooding ceremony will be held at 10:30 a.m. in UAB’s Alys Stephens Center, 1200 10th Ave. South. At least 71 candidates will receive the university’s highest degree at the ceremony. The guest speaker will be S. Robert Hernandez, Dr.P.H., professor and director of the doctoral programs in the UAB Department of Health Services Administration.

More than 800 students will walk in UAB’s fall commencement ceremony at 2 p.m. in Bartow Arena, 617 13th St. South. At least 2,470 students are expected to graduate this semester.

Two will be awarded the President’s Medal during the commencement ceremony. Louise T. Chow, Ph.D., is professor of biochemistry and molecular genetics and senior scientist in the UAB Comprehensive Cancer Center. Chow is a global leader in the fight against cervical cancer, as she continues her groundbreaking research into human papillomavirus, the virus responsible for that cancer. In May, Chow was elected to the National Academy of Sciences for excellence in original scientific research. Academy membership is one of the highest honors given to a scientist in the United States, and Chow is the only Academy member in Alabama.

Also receiving the President’s Medal will be John J. McMahon Jr., chair of the board of McWane, Inc. A member of the University of Alabama System Board of Trustees since 1998, McMahon also is a member of the UAB Health Systems Board of Directors and was chair of the board from 1997 to 2001. His many board appointments include Protective Life Insurance Company, ProAssurance Corporation and Cooper/T. Smith Corporation. He has been a stalwart supporter and contributor to UAB, the UA System, Alabama and the Birmingham community.

The mace carrier will be Professor Stephen Barnes, Ph.D., of the UAB Department of Pharmacology and Toxicology. Barnes was awarded the 2012 Distinguished Faculty Lecturer Award, which is the academic medical center’s highest faculty honor.

Brendan Rice, the undergraduate commencement speaker, will graduate with a bachelor’s degree in international studies. Rice is in the Global and Community Leadership Honors Program. He was a 2012 Truman Scholarship finalist. His scholarships received include the 2012 Golden Key Undergraduate Achievement and the Susan and Tennant McWilliams Endowed scholarships. Rice has worked with the United Nations Food and Agriculture Organization, Alliance to End Hunger, Bread for the World and the Alabama Poverty Project. He is now working with the U.S. Department of State through its Virtual Student Foreign Service eInternship program. Upon graduation, Rice will work for the Food and Agriculture Organization of the United Nations in Sierra Leone, where he will be involved in a project that focuses on empowering smallholder farmers.

Meena Nabavi, the graduate commencement speaker, will receive a master’s degree in public health preparedness management and policy. Nabavi has been a graduate assistant at the Sparkman Center for Global Health since 2011. This summer she was an intern at the United States Agency for International Development in Addis Ababa, Ethiopia, where she worked with Save the Children in evaluating activities for TransACTION, a $40 million HIV/STI prevention and care program. As part of a preparedness and response policy course at UAB, she worked with the Alabama Department of Public Health to test the newly developed Patient Tracking Module of the Alabama Incident Management System for medical needs shelters following disasters. Nabavi plans to work with international development programs focused on public health and disaster preparedness.