From Alabama to Africa: UAB grad to help farmers in Sierra Leone

by Shannon Thomason
Brendan Rice will speak at UAB’s commencement Dec. 15, then head to Africa where he’ll work with the Food and Agriculture Organization of the United Nations.

Growing up as the son of a Presbyterian pastor, Brendan Rice of Anniston learned that stories have the power to move people to action. When he graduates with a bachelor’s degree in international studies from the University of Alabama at Birmingham (UAB) on Saturday, Dec. 15, 2012, he will share some of his own story as the undergraduate commencement speaker. 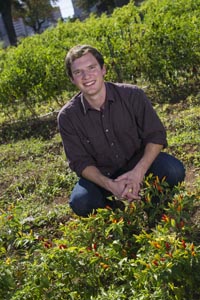 Then Rice will use what he has learned to help small farmers in Sierra Leone, Africa.

Rice, 21, came to UAB and the university’s Global and Community Leadership Honors Program to further his interest in social justice and hone his leadership skills “to shape a better world.” UAB offered him the space and the opportunities to explore his interests, he said.

“After attending the Universities Fighting World Hunger Summit my freshman year, I became passionate about the issue of hunger, because it is simply unthinkable that hunger exists in a world with enough food for everyone,” Rice said. “I began to see how the energy and dedication of students can shake up the structures that allow issues like hunger and poverty to persist.”

In UAB’s international studies program, Rice had the opportunity to learn about food security through social, political and economic lenses while focusing on his coursework on Africa. Rice also earned a minor in media studies, which taught him how to communicate the issue of hunger through digital media in a way that moves people and spurs them to act.

Rice’s accomplishments, honors and volunteer work show his dedication and ability. A winner of the UAB International Studies Student Engagement Award and two-time winner of the UAB Student Excellence Service Initiative Award, Rice also was a national finalist for the Truman Scholarship, a highly competitive award for students exemplifying leadership and commitment to public service. He was one of 50 students selected nationally by Oxfam America as an Oxfam CHANGE Leader. He volunteered for the Alabama Poverty Project and Alabama Arise, a grassroots organization to promote repealing the Alabama state sales tax on groceries. He has taken years of French classes so he will be able to communicate with the citizens of Sierra Leone.

Rice is a “virtual intern” with USAID Kenya for the Virtual Student Foreign Service of the U.S. State Department. Through social media he shares stories related to food security in Kenya with students and development professionals. Each summer of his college career he has interned in Washington, D.C., for hunger-related organizations, including Bread for the World, the Alliance to End Hunger and the Food and Agriculture Organization of the United Nations.

These experiences, along with his coursework at UAB, have readied him for his new job with the Food and Agriculture Organization, in which he will bolster food security in Sierra Leone through developing rural institutions that improve smallholder farmers’ ability to increase food production and access markets.

“Considering that a great deal of the world’s hungry are subsistence farmers in rural areas who work just to produce food for their families, ensuring that smallholder farmers succeed both reduces hunger and begins to build a better global food system,” Rice said.

On Saturday, Rice will stand before his classmates, and their family and friends, to deliver his commencement address. He will talk to them about fighting injustice in the world, about helping people and about sharing their stories to make the world a better place. He will receive his degree in front of his parents, David and Karolyn Rice, and his brother Brian, who also attends UAB. Then Rice will set off to put his words into action in Africa.