by Shannon Thomason
Morgan’s photographs on display reflect on cooking with her mother and her childhood neighborhood.

Artist Celestia Morgan is looking forward now that she graduated from the University of Alabama at Birmingham (UAB) last Saturday with a bachelor’s degree in studio art, but it is in looking back that she finds her inspiration. 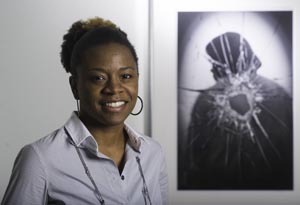 Morgan, 31, was born and raised in Birmingham. She is a photographer whose primary style is retrospective imagery; she also creates sculpture. The Birmingham Civil Rights Institute (BCRI) is highlighting Morgan’s two most recent photographic series, “Family Recipe” and “In Retrospect,” with a solo show in its Milestone Gallery through Feb. 24, 2013.

“In Retrospect” is inspired by the socioeconomic transformation of the artist’s childhood community. The series of photographs pays homage to what inspired Morgan in her youth, as well as who she is now and her dreams of what she will become.

“Family Recipe” reflects on the artist’s childhood memories of special times spent cooking and sharing with her mother.

“The ‘Family Recipe’ series stems from memories of times I spent with my mother cooking in the kitchen,” Morgan said. “I watched her make biscuits and other soul-food dishes the way her mother taught her. I never met my grandmother, but I felt a spiritual connection to her in this series. In these photographs, I focus deliberately on the hands and the ingredients — flour, milk and salt — by eliminating the environment. The hands portray a meticulous care in mixing the ingredients, in preparation for the nourishment of the family.”

Through the photographs, Morgan wants to honor her grandmother while evoking the viewer’s memories of family members or friends who used a recipe that was handed down through generations.

“These traditions and memories provide that connection to our past,” she said. “Food is an important part of the African-American community. It contains a power that binds families together from generation to generation. It is at the dinner table where family is nourished physically and spiritually. However, without a determined effort, these family food traditions may be lost and become memories of the past.”

Morgan developed a love for photography at Jackson-Olin High School while documenting the Junior ROTC with a 35mm film camera. Inspired to become the first member of her immediate family to receive a college education, Morgan earned an associate’s degree in elementary education at Lawson State Community College in 2004. She later came to UAB with the intention of majoring in elementary education but soon applied for the bachelor of fine arts (BFA) program. Her work was recently on display in the annual BFA Student Show at UAB’s Visual Arts Gallery.

Her work has been reviewed by the Photo Guild of the Birmingham Museum of Art, and she was named one of Seven Emerging Artists; by Yale Art Professor David Hilliard; and by nationally renowned artist Willie Cole. Morgan’s work has been featured in Aura: Literary Art Review, South x Southeast and the Society for Photographic Education’s online spotlight.

She represented UAB and Professor Sonja Reiger, M.F.A., of the Department of Art and Art History, at the Society of Photographic Education 2010 National Conference in Atlanta. Additionally, through UAB’s Department of Art and Art History, Morgan received the 2011-2012 Elite Senior Scholarship. She is the first African-American female recipient of the award.