by Jim Bakken
Recent UAB graduate Brendan Rice has received an honor for his work in helping to eradicate world hunger. 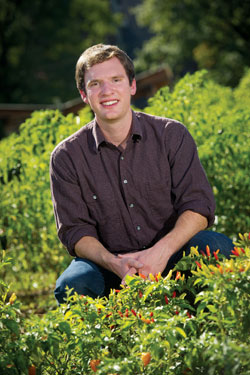 University of Alabama at Birmingham (UAB) alum Brendan Rice has been awarded a President William Jefferson Clinton Hunger Leadership Award. Rice, a 21-year-old Anniston native, graduated from UAB in December 2012 with a degree in international studies.

“I feel very excited and honored to have been selected as the recipient,” said Rice, a graduate of the Global and Community Leadership Honors Program and a 2012 Truman Scholarship finalist. “This is a great opportunity for me to use this award to achieve my goals, which are inextricably linked to the broader work of ending hunger in our world of plenty.”

The award is presented by Stop Hunger Now and the NC State University Center for Student Leadership, Ethics & Public Service. Awardees are selected for “outstanding leadership in the fight against hunger” and “a commitment to a life of service in the area of hunger, poverty reduction or related area.”

Rice has a laundry list of work with organizations devoted to eradicating hunger, including the United Nations Food and Agriculture Organization (FAO), Alliance to End Hunger, Bread for the World and the Alabama Poverty Project. He has also served with the U.S. Department of State through its Virtual Student Foreign Service eInternship program.

Today, Rice is in Sierra Leone working with the FAO on a project that involves the formation and development of 193 Agricultural Business Centers that assist poor smallholder farmers by offering services and access to markets. Drawing from his time in the Media Studies program at UAB, Rice is creating a short documentary that will show the effect of the project on food security in Sierra Leone.

“Hunger cannot be eliminated without empowering smallholder farmers, especially in Sierra Leone,” he said. “The majority of people who experience hunger live in rural areas and rely on agriculture for their livelihoods. If smallholder farmers have the ability to succeed, poverty will be lessened and food security bolstered.”

Ultimately, Rice plans to pursue a master’s degree in development studies followed by a master’s in food security. From there, he hopes to pursue a career in international development though the United Nations, USAID or a non-governmental organization such as Oxfam America.

“Without UAB, I would not have the know-how and the support to have lived out my passion in this way,” he said. “I am grounded by what UAB has instilled in me. I receive this award as one student of the many who are dedicating their studies and time to combat the issue of hunger. Collectively, we have the knowledge, tools and resources to make hunger a thing of the past. It’s up to my generation to make it happen.”