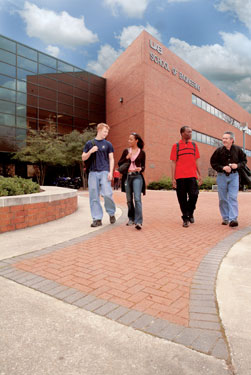 The University of Alabama at Birmingham (UAB) School of Engineering interactive open house will be highlighted with appearances by Darth Vader and the evil Dr. Doofenshmirtz with his Slimonator. The annual event, which will be held Sunday, March 10, 2013, features students from the school’s five departments performing skits and conducting interactive experiments.

The Department of Materials Science and Engineering will bring in Darth Vader this year. Instead of using the force, he will use a blow torch to melt a penny in someone else’s hand. The department will also show visitors how acoustic waves can make non-Newtonian fluid stand up in columns.

The Department of Civil, Construction and Environmental Engineering will welcome the evil Dr. Doofenshmirtz of the Disney Channel’s Phineas and Ferb. The engineering team will train audience “agents” to build a structure and use a transportation system to stop Doofenshmirtz’s Slimonator from unleashing gallons of slime on a victim.

The public is invited to attend all events from 1-3 p.m. in the Business-Engineering Complex, 1150 10th Ave. South. Private tours for Central Alabama school groups will be held March 11 and March 12.