Sheila M. Chaffin, AICP, executive director for Campus Planning at the University of Alabama at Birmingham (UAB) has been awarded the Distinguished Leadership Award for a Professional Planner by the Alabama Chapter of the American Planning Association. It is the highest honor a professional planner may receive. 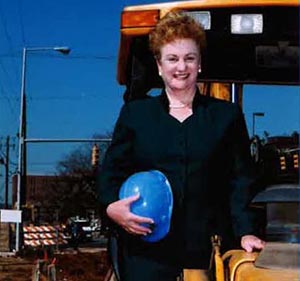 “During the past 14 years, UAB has been carefully master planning to create a more residential campus setting with walking paths, clusters of academic programs, clusters of buildings that relate to their streets and surroundings and a strong hospital and research setting,” said Chaffin, who has performed campus planning for 30 buildings since arriving at UAB in 1998. “I am proud that the American Planning Association is recognizing UAB’s transformation through this award.”

She calls the UAB Campus Green, which opened in 2008, her favorite transformational project. Chaffin used the best practices of green academic quadrangles from across the country to convert the four block area of UAB into a “peaceful, open-air area for thoughtful contemplation and social interaction, framed with undergraduate-oriented major buildings.” She said Heritage Hall is her favorite academic building, and Art Play her favorite donor project.

The Distinguished Leadership Award is not given annually, but only when the profession wishes to recognize an individual who contributes greatly through significant and sustained leadership and service.