by Jim Bakken
UAB announces $1 billion goal for The Campaign for UAB, begins the public phase of its largest fundraising campaign to date.

The University of Alabama at Birmingham today officially kicked off the public phase of The Campaign for UAB: Give Something, Change Everything, the university’s largest fundraising campaign to date, announcing an ambitious $1 billion goal.

The campaign will run through 2018.

“The theme reflects the fact that, when you give to UAB, you help us change our community and our world for the better, whether by finding the cure for a disease, enabling a bright young person to go to college or lighting the spark for a new innovation,” UAB President Ray L. Watts said. “We are working hard to strengthen our position as one of the nation’s most productive and dynamic universities. To accomplish this goal, we are going to set our priorities, invest resources carefully and invite partners to join us.”

In September, during the silent phase of the campaign, the business school was named the UAB Collat School of Business for longtime supporters Charles and Patsy Collat in recognition of their lead gift to The Campaign for UAB — $25 million in gifts and pledges.

“I am so absolutely excited to be in a position with Patsy to make something like this happen that reaches into every program in the School of Business,” said Charles Collat, philanthropist and former CEO of Mayer Electric Supply Company Inc. “Being able to support an institution like UAB that plays such an important part in so many lives is something I wouldn’t have imagined in my wildest dreams.”

According to UAB Vice President Shirley Salloway Kahn, the campaign will allow donors to choose what efforts their monies support.

“We are launching the public phase of the campaign with a TV spot that asks, ‘What do you want to change today?’” Kahn said. “That is a significant message because we want to help donors support what they are passionate about by connecting them with our people who share the same passion in the work they do. We really want to know specifically what YOU want to change and make it happen through the ongoing work at UAB. We also produced a video that goes into greater detail about the campaign and highlights the variety of ways in which our donors have changed and continue to change the world.”

For example, donors can:

Theresa Bruno, one of three distinguished co-chairs of The Campaign for UAB and president of THB Inc., is chair of the corporate board of UAB’s Alys Stephens Performing Arts Center. 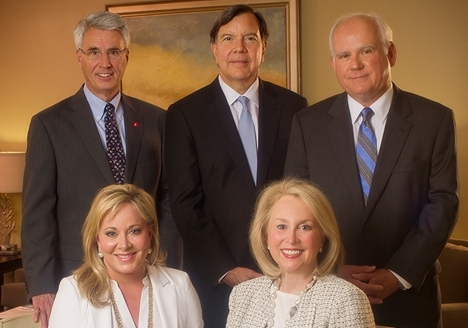 Mike Warren, Johnny Johns, Ray Watts, Theresa Bruno and Shirley Salloway Kahn “There are so many worthwhile efforts to support at UAB,” Bruno said. “The arts are dear to me, and being able to help UAB expose Birmingham to world-class programming has been one of the most rewarding experiences of my life. I hope my work as a campaign co-chair will give others that opportunity.”

Campaign co-chair Mike Warren, president and CEO of Children’s of Alabama and former chair/CEO of Energen, has seen the benefits of supporting UAB health care initiatives.

“Partnering with UAB to improve patient care and support the discovery of new therapies and cures is rewarding to me personally and professionally,” Warren said. “I am so pleased to be a part of a campaign that will allow everyone to partner with UAB.”

Participation will also come from within; at least $35 million of the $1 billion goal is expected from UAB faculty and staff.

“I anticipate that the UAB family, who knows more than anyone the great contributions this institution makes to society, will step up in a big way,” Watts said. “We are not going to ask others to support something we do not ourselves support. Already, UAB Health Services Foundation physicians have provided a lead gift, kicking off our faculty and staff campaign with $2.5 million toward the purchase and development of a cutting-edge PET/MRI facility that will open up new opportunities in patient care and research.”

UAB’s previous philanthropic campaign took place between 1999 and 2003 and well exceeded its goal of $350 million, which at the time was the largest ever undertaken by an Alabama university. UAB raised $388.7 million.

“The $1 billion goal is an unprecedented figure for UAB,” said Kahn. “UAB is poised for transformational growth, and the money that is raised will help our faculty and staff continue their efforts to find new cures for diseases, educate students, and bring recognition to our city and state through their outstanding teaching, patient care, research and service.”

As president and chair of Protective Life Corporation, which has a more than 100-year history of business success and a rich tradition of philanthropy and community service, campaign co-chair Johnny Johns knows something about making a difference in the Birmingham region.

“By supporting UAB, not only do you support individual research, health care and academic initiatives, you expand the institution’s staggering positive impact on the economic development and community service that starts here and extends around the world,” Johns said.

“The scope and impact of this campaign will extend far beyond our campus,” Watts said. “A successful fundraising effort of this scale will reap vastly improved health care, educational opportunities and quality of life, as well as robust economic development, throughout our community, state, nation and beyond. This will be a campaign with a truly global impact.”

To learn more about the “Give Something, Change Everything,” campaign, follow its progress or give, visit uab.edu/campaign.