The UAB Callahan Eye Hospital owes its beginning to a 5-year-old girl. The hospital, which celebrates its 50th anniversary in November, was the vision of ophthalmologist Alston Callahan, who established a clinical practice in Birmingham after World War II. In the early 1950s, Callahan treated young Barbara Ingalls’ crossed eyes with glasses and eye-strengthening exercises. 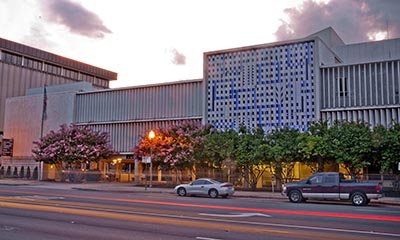 Her grandfather Robert Ingalls was a wealthy industrialist and founder of Ingalls Ironworks and Ingalls Shipbuilding Corp. When he discovered that Callahan had not sent a bill for his services, Ingalls demanded he do so. Callahan asked Ingalls to, instead, donate money to help establish an eye specialty hospital in Birmingham. It was Callahan’s dream to create a facility to provide the best possible eye care to all those who needed it, regardless of their ability to pay. Ingalls agreed, and the Callahan Eye Foundation was born.

The facility opened in 1963 as the Eye Foundation Hospital. Connections to the University of Alabama at Birmingham were established in 1971 with a combined residency-training program with the UAB Department of Ophthalmology. The hospital joined the UAB Health System in 1997, and Callahan’s name was added to the title in 1999 to honor the visionary who had made it possible.

To date, the residency program has trained more than 200 ophthalmologists. The hospital boasts 154 credentialed medical staff, including 80 surgeons. In a typical year, the hospital sees 23,000 patients, performs nearly 10,000 surgeries in nine state-of-the-art operating rooms dedicated strictly to vision surgery, and treats 5,600 patients in its emergency department — the only 24-hour, seven-day-a-week, eye-emergency center in Alabama. 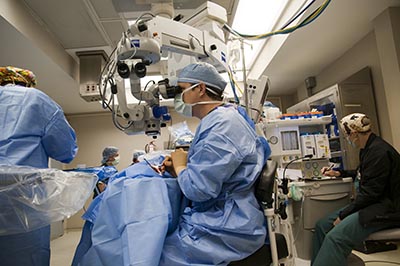 “The UAB Callahan Eye Hospital is the state’s only facility dedicated to providing quality medical and surgical eye care to the people of Alabama and the Southeast,” said Brian Spraberry, president and CEO of the hospital. “It’s one of the busiest ophthalmology surgery centers in the country and teams with the Department of Ophthalmology at UAB to conduct groundbreaking research in eye diseases such as macular degeneration, glaucoma and uveitis.”

The hospital is home to the nation’s first Level 1 trauma center, designated in 2011. The American Society of Ocular Trauma and the United States Eye Injury Registry were founded by members of CEH. The registry continues to be housed in Birmingham.

The hospital also is considered a great place to work. It was named one of the best places for working parents six times by Child Times/Family Times Magazine and was named one of the “100 Great Places to Work in Healthcare” by Becker’s Hospital Review. CEH has also won two prestigious Press Ganey Summit awards for inpatient satisfaction and a 2013 Press Ganey Guardian of Excellence award for dedication to inpatient care.

“The UAB Callahan Eye Hospital is truly one of Alabama’s gems,” said UAB Health System CEO Will Ferniany. “For 50 years, it has been recognized internationally for eye trauma, outstanding and innovative patient care, important research into eye disease and has trained the next generation of ophthalmologists. As the hospital embarks on its next 50 years, it will continue to be a national and international leader representing the very best in vision care.”