by Jim Bakken
The University of Alabama at Birmingham College of Arts and Sciences will host its Distinguished Alumni Awards Reception on Thursday, Dec. 12.

The University of Alabama at Birmingham College of Arts and Sciences will host its Distinguished Alumni Awards Reception on Thursday, Dec. 12. The event will take place at the UAB Alumni House located at 1301 10th Ave. South.

The honorees were selected based on a collegewide nomination process and are noted for their exemplary leadership, remarkable professional achievement, outstanding human qualities, and contributions to the university and our community. In addition to noting distinguished alumni, the college will also recognize a donor with its Friend of the College Award.

Kristofer Hagglund, Ph.D. Distinguished Alumni Achievement Award Recipient: Kristofer Hagglund, Ph.D., received both his master’s and doctoral degrees in clinical psychology from UAB. He is dean of the School of Health Professions and professor of Health Psychology and Public Affairs at the University of Missouri. Hagglund was the founding director of the UM Master of Public Health program, developed and taught the popular undergraduate and graduate course “Health Care in the United States,” and continues to mentor public health students. He has been the principal or co-principal investigator on grants and contracts totaling more than $17 million. He has published more than 70 peer-reviewed publications and book chapters and is the co-editor of a book addressing disability and rehabilitation research. Hagglund is a fellow of the American Psychological Association and a diplomate of the American Board of Professional Psychology.

Scott Herring, Ph.D. Distinguished Young Alumni Award Recipient: Scott Herring, Ph.D., graduated with bachelor’s degrees in English and history from UAB. He is an associate professor of English at Indiana University, Bloomington, with interdisciplinary specializations in modern American literature, gender and sexuality studies, Southern studies, critical regional/rural studies, and material culture studies. Herring has published two books, including “Another Country: Queer Anti-Urbanism,” which was awarded a 2011 Lambda Literary Award for Best Book in Lesbian, Gay, Bi-sexual and Transgender studies, the highest honor for a book on the subject matter. He was also awarded with the 2009 Curricular Recognition Award from Pennsylvania State for his support of LGBT students. He also received the Outstanding Junior Faculty Award in 2008-2009 and an Indiana University Trustees Teaching Award in 2008.

Garylnardo LaBron Smith Distinguished Young Alumni Award Recipient: Garylnardo LaBron Smith graduated from UAB with a bachelor’s degree in music. He performed as a lead tenor in several operas, toured England with the International Cathedral Music Festival, was a featured vocalist with the Alabama Symphony Orchestra, and was a guest soloist with the UAB Gospel Choir in its major concerts, live recordings and theatrical productions. Smith also served as a high school music teacher and professional music instructor. He was a licensed and ordained minister and served as the national minister of music for the Apostolic Overcoming Holy Church of God International for 10 years, as well as the national youth ministry president for five years. He passed away on June 13, 2013. 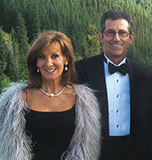 Gail and Jeffrey Bayer Friend of the College Award Recipients: Jeffrey and Gail Bayer recently committed a generous gift to the UAB Abroms-Engel Institute for the Visual Arts. This gift will be used to name the atrium, which will be the building’s centerpiece. Jeffrey Bayer is president and CEO of Bayer Properties, a national commercial real estate leader, with a mixed-use asset portfolio of more than 11 million square feet. He also directed the development of one of the industry’s first outdoor fashion centers with the 1997 opening of The Summit in Birmingham. Gail Bayer serves on the advisory board of UAB’s Alys Stephens Performing Arts Center and was a board member of the Alabama Symphony Orchestra.