by Meghan Davis
Four documentary shorts made at UAB will be shown as part of a series of Alabama-made films at the festival. 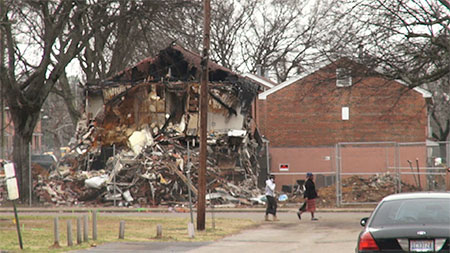 "Another Day in the Neighborhood"Documentary shorts produced by six University of Alabama at Birmingham students and an alumnus will be screened during the 2014 Sidewalk Film Festival.

Three of the four films were made by students in the spring 2014 UAB College of Arts and Sciences Ethnographic Filmmaking class, taught by Michele Forman. The fourth film was made by alumnus Nick Price while he was a fellow in the Southern Environmental Law Center’s Southern Exposure film program in 2013.

The festival will be Aug. 21-24 in Birmingham, with documentary shorts screening in two sessions. Check the Sidewalk Film Festival website for the full schedule.

While UAB students have participated in the festival since it began, this year marks the first time UAB student work will be screened in competition with other Alabama-produced work, Forman says.

“I am amazed each year at our undergraduate students’ ability to identify crucial community issues for their films,” Forman said. “Having their films accepted in competition is a real accomplishment, a testament to their hard work learning the craft of filmmaking. They learn to shoot and edit, spending long hours in the field and in the editing room. Their dedication to researching these tough topics and to working with their community partners really shines through these stories.”

Students in the class, many of them first-time filmmakers, work collaboratively to brainstorm and develop story ideas, then invite their community subjects to view and critique their work as it progresses. 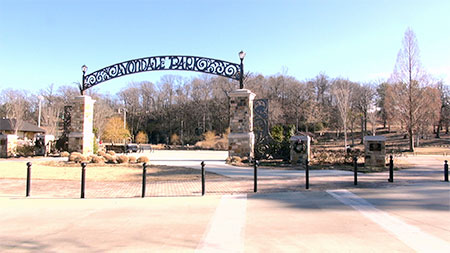 "Across the Tracks"“I love using film and digital storytelling as a means to connect our students at UAB with the city they live in,” Forman said. “These three films focus on some tough issues facing us — issues that many other communities across the country are grappling with — gentrification, childhood obesity and affordable housing.”

Hollie Parrish and Samantha Richardson documented the aftermath of the deadly gas explosion in Gate City in December 2013. Their film “Another Day in the Neighborhood” investigates the conditions of Birmingham’s public housing.

“Ethnographic Filmmaking really presented me with an opportunity to break past social barriers and learn about the lives of people I otherwise would never have met,” said Richardson, a studio art major.

She and Parrish were drawn to learn more about public housing after interviews with residents revealed that gas leaks were one of many examples of the poor conditions they faced. Due to overwhelming police presence in the Marx Village community in Gate City following the explosion, they connected with residents of Southtown, another public housing community.

“We decided to merge the stories of both neighborhoods, with Marx Village serving as a reminder of what can happen if these problems are simply ignored,” she said.

“Across the Tracks,” by Rebecca Graber and Harsh Shah, examines gentrification issues in Birmingham’s Avondale neighborhood. As both are first-time filmmakers, Graber says their first challenge was learning the basics of shooting and editing video. Their second challenge was telling a compelling story in fewer than 10 minutes. 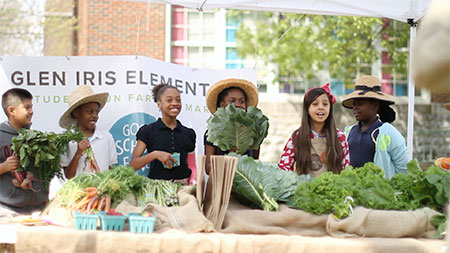 "Biophilia"“It got even trickier when Harsh and I decided to focus on gentrification,” Graber said. “I had had some experience with it while doing a public health program at Columbia University the previous summer, which made me curious whether a similar pattern was developing with all the changes going on in my beloved Birmingham.

“We chose Avondale because of all the new businesses opening up. We learned how these changes helped certain individuals of Avondale while ignoring other large swaths of the community. Avondale is diverse and vibrant, especially when you drive down the main street. But unfortunately, if rapid changes keep happening and rents keep rising, some residents will be forced to find another place to live, and some of these folks have lived there for quite a while.”

Stephanie Lockhart and Taylor Tincher’s “Biophilia” chronicles the partnership between Glen Iris Elementary School and Jones Valley Teaching Farm as a nature-based curriculum is introduced through a new community garden program. The program has expanded to include nearby schools and community partners.

“This community is really upbeat and progressive,” said Lockhart, a filmmaking major. “The community wants what is best for the children and their families, and to make sure they deliver an appropriate education for the children.”

The collection of Ethnographic Filmmaking projects is archived in Sterne Library and can be streamed via the Sterne Digital Collection and the UAB Media Studies Vimeo page.

“Having our films chosen for the Sidewalk Film Festival is such an honor,” Graber said. “It really speaks to Michele’s talent as a teacher and filmmaker, because she was a huge help in crafting our film. I’m excited to hear feedback from the larger community.”