by Shannon Thomason
John Wesley Chancellor of Enterprise and Candy Mosley of Foley are Mr. and Ms. UAB 2014, with first alternates Ethan Gissendaner and Asia Sullivan. 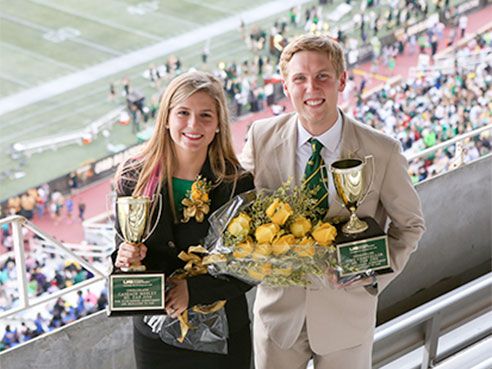 The winners of the 33rd annual Mr. and Ms. UAB Scholarship Competition were announced at UAB’s Homecoming game Saturday, Oct. 11, at Legion Field. Ethan Gissendaner of Eufaula and Asia Sullivan of Castleberry were named as first alternates.

Sponsored by the UAB National Alumni Society, this tradition recognizes outstanding male and female students on campus who have demonstrated scholastic achievement, leadership, campus and community involvement, and overall enthusiasm for UAB.

Chancellor, 20, is a junior majoring in neuroscience. He is a teaching assistant for the University Honors Program, is a vice president for Tau Kappa Epsilon and is on the Student Alumni Society Leadership Committee. Chancellor also is a 2014 Goin’ Green orientation leader. He volunteers as a Spanish translator for Cahaba Valley Health Care and is an ACT mentor with the Birmingham Education Foundation. He is the son of Scott and Regina Chancellor.

Mosley, 20, is a junior majoring in public health. She is a member of the University Honors Program and a recipient of the License to Learn Scholarship. Director of marketing and public relations for the Student Activities Council, Mosley is also the vice president of communications for the Undergraduate Student Government Association and a member of the Student Alumni Society Leadership Committee. She volunteers with Into the Streets and Walk Now for Autism Speaks. She is the daughter of Tod and Dawn Mosley.

Gissendaner, 20, is a junior majoring in health care management. He is a member of the Global and Community Leadership Honors Program. A resident assistant, Gissendaner is also the chapter president for Alpha Tau Omega and an intern with UAB Digital Media. He volunteers as Read-a-thon coordinator for Desert Island Supply Company and at Gentiva Hospice. He is the son of Jim and Tracy Gissendaner.

Sullivan, 20, is a junior majoring in public health with a concentration in global health studies. She was named Outstanding Student Leader in 2014 and is a recipient of the Alliance Scholarship. A resident assistant, Sullivan is an orientation leader coordinator and is a teacher’s assistant for the University Honors Program. She volunteers with the Humane Society and 1917 Clinic. She is the daughter of Mary Sullivan.