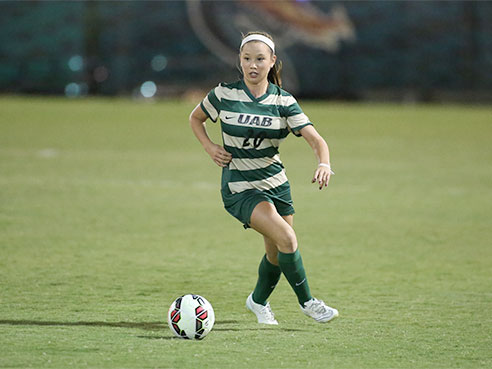 BBVA Compass and University of Alabama at Birmingham officials today announced a $1.5 million gift from the bank that will bring a new soccer facility to the campus.

In recognition of the gift, the University of Alabama System Board of Trustees today approved naming the facility BBVA Compass Field.

“This is an exciting milestone for our continued growth, and I thank BBVA Compass for this generous support,” said UAB President Ray L. Watts. “Plans for this facility have been in place for some time, and I am pleased that BBVA Compass can be recognized for their generous gift through this naming.”

Located south of University Boulevard just east of I-65, BBVA Compass Field will be the first impression visitors encounter as they enter campus from I-65.

“In an era when the community and UAB are connected in mutual support and growth like never before, I am proud that this facility and the BBVA Compass name will welcome students, faculty and staff, as well as guests onto our campus,” Watts said.

UAB Men’s Soccer and Women’s Soccer will play home games at the facility, which will also host non-UAB soccer matches. The facility is anticipated to seat roughly 2,500.

“This is great for Birmingham and UAB,” said BBVA Compass Chairman and CEO Manolo Sánchez. “BBVA Compass Field will showcase one of the most popular sports in the world and allow us to support UAB’s diverse campus and international community. It’ll also contribute in a meaningful way to the revitalization of the urban core of this historic and important American city.”

“Philanthropic support like this is critical to this great institution,” said UAB Senior Vice President Shirley Salloway Kahn. “And this was a great opportunity to match a donor’s gift with their interest.”

BBVA Compass has a strong record of engaging with the communities it serves through the global sport of soccer. Its parent company, Spain-based BBVA Group, sponsors La Liga, one of the most popular professional sports leagues in the world, and BBVA Compass Stadium in Houston is the home of Major League Soccer’s Houston Dynamo.

Birmingham itself is no stranger to soccer. The city had the highest ESPN audience in the country for the 2014 FIFA World Cup qualifying match between the United States and Mexico, according to socceramerica.com, at almost twice the national viewership average. The city was also among the top 18 U.S. markets in television ratings records during the 2014 World Cup.

Inaugural seasons for the men’s and women’s programs were in 1979 and 1996, respectively, and both have experienced success. The UAB women’s team won a Conference USA Championship in 2004. Head Women’s Coach Harold Warren helped coach the University of Southern California to a National Championship in 2007.

“The new facility will help make UAB a top contender when putting in bids to host Conference USA and the first round of the NCCA tournament,” Warren said. “The ability to attract ACC, Big 12 and Big 10 schools for play helps the program’s competitive growth, and fans love watching UAB compete against the best. It’s a win-win for everyone.”

“Recruits will know they are joining a program that is first class, and that the university and our community support the team,” Getman said.

BBVA Compass Birmingham City President Alan Register says the gift is about more than soccer, pointing to its broader impact.

“UAB is vital to the economic and cultural future of our community, and an investment in its continued growth and prosperity is one of the best ways to support Birmingham and Alabama,” Register said.