by Meghan Davis
Brian Nykanen is a Cadet in the Army ROTC and honors student. 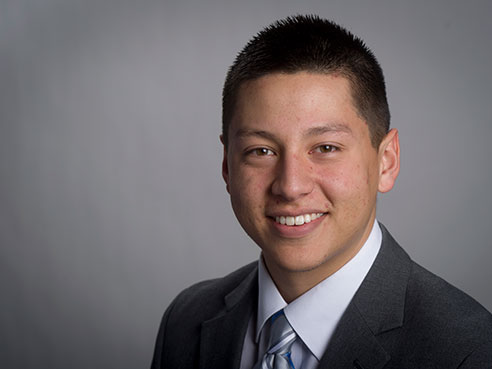 Brian Austin Nykanen, a University of Alabama at Birmingham junior neuroscience major and a Cadet in the Army ROTC at UAB, is a finalist for the Truman Scholarship.

Nykanen, who has a 3.9 grade-point average in the highly challenging neuroscience program, is a member of the UAB Honors College’s Experiential Learning Scholars Program. This past semester, he was the Reserve Officer Training Corps Battalion Command Sergeant Major, which is awarded to the top cadet.

The undergraduate neuroscience program, a collaboration between the UAB College of Arts and Sciences and School of Medicine, attracts top students who are able to work in the labs of world-class neuroscience researchers for three or four years. Nykanen has balanced his research time —first with circadian rhythm researcher Karen Gamble, Ph.D., assistant professor in the Department of Psychiatry, and now with MiYoung Kwon, Ph.D., assistant professor in the Department of Ophthalmology — with the time demands of ROTC, which usually are 20 to 25 hours a week.

“The Truman Scholarship seeks students with intellectual merit, demonstrated leadership and a commitment to public service,” said Ashley Floyd, associate director of the UAB Honors College and director of the Office of National and International Fellowships and Scholarships. “Having maintained near-perfect grades as a neuroscience major while also holding leadership positions in ROTC and serving children with muscular dystrophy, Brian exemplifies the Truman selection criteria.”

Nykanen’s heart is in both the neuroscience and the Army training. His family has faced a number of brain disorders, Nykanen said.

“My mom has had two brain tumors,” he said. “From her college brain tumor, she suffered epilepsy and a stroke. My uncle in Atlanta, who helped raise me, suffers from multiple sclerosis.”

Those experiences evoked his keen interest in UAB’s undergraduate neuroscience program. But he faced a problem: “I had to find a way to finance college, or I wasn’t going.” 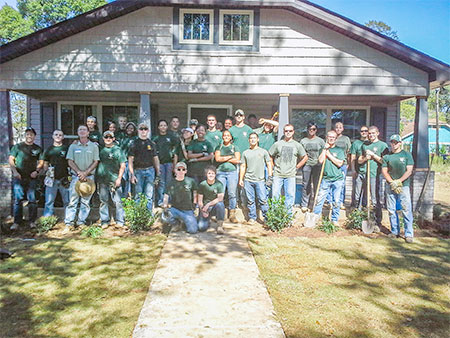 Brian Nykanen, far left, with the UAB Army ROTC volunteering with Habitat for Humanity. Nykanen discovered the Army ROTC program while searching for college aid. ROTC covers his college expenses, and in return, he will have to serve four years of active duty and four years of National Guard or Army Reserve duty. If his dream of going to medical school comes true, ROTC will cover that, and his service commitment will double.

ROTC training has meant much more than money to Nykanen.

“I’m in love with ROTC here at UAB,” he said. “I have nothing but opportunities, left and right. I’m learning leadership skills. I came here as a teenager, and I became an adult.”

Lt. Col. Arieyeh J. Austin, professor of military science at UAB, said that Nykanen exemplifies the values of citizenship, national and community service, and personal responsibility that ROTC tries to instill as it educates, trains and commissions college students to be officers and leaders of character in the Total Army.

“Selected from among his cohort to serve as the Battalion Command Sergeant Major, he embodies the ethos of what we stand for,” Austin said. “UAB ROTC completed more than 82 community-service projects or interactions in the past five months, averaging around one every two days. Events ranged from community blood drives, Veterans Hospital, Habitat for Humanity, American Legion, Veterans of Foreign Wars, Health Fairs, DECA, clothing drives and other efforts. Brian volunteered for almost all of these events and was able to do this while still maintaining a 3.9 GPA. He is what every student should strive to be here at UAB.”

With Kwon, Nykanen will help study how the brains of glaucoma patients react to the loss of visual field and its effect on the visual pathway — from the optic nerve to the lateral geniculate nucleus of the brain, and then on to the brain’s visual cortical area.

Nykanen, from Navarre, Florida, is interested in pediatrics, and he specifically wants to target children who are underserved. After completing his duties as an Army ROTC cadet at UAB, Nykanen will receive a commission in the Army; there he hopes to create new policies that cast more medical attention on the children of service members. He plans to build his career as a pediatrician in the Army and later serve as a rural health care provider.