The world’s most prestigious halls feature Meyer audio systems, including Eastman Kodak Hall, Lincoln Center and Carnegie Hall, and the ASC has joined that club of excellence and discrimination.
As the year draws to a close, UAB News looks back at some of the top stories of 2015. This article was originally published on March 3. 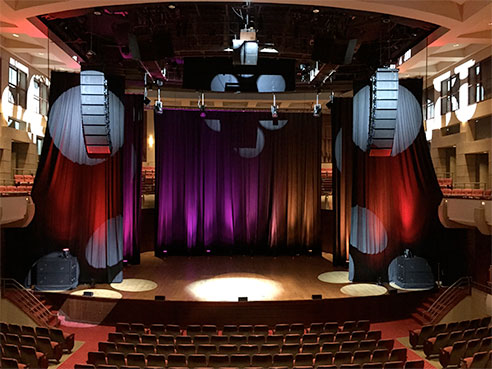 Patrons can experience the new system at upcoming ASC shows. Call 205-975-2787 for tickets or visit www.AlysStephens.org.

The technical requirements Meyer Sound engineers and designers were tasked with were “to provide the capability of maintaining 110 decibels, clear and undistorted at every seat in the Jemison Concert Hall, with a variation of less than two decibels,” said Adam Stermer, ASC technical director.

“Obviously, we are not interested in running at that kind of sound-pressure level; but in order to provide not only ‘horsepower’ but also perfect clarity, ample, even excessive, headroom is required,” Stermer said.

The comprehensive system includes crystal-clear coverage of all 1,300 seats in the Jemison Concert Hall, including the Choral Balcony, the seats that encircle the rear of the stage. The audio difference between the front row and the back row requires a computer to measure.

“Our system, the LYON array, is part of the brand-new LEO series, which is the first complete overhaul of Meyer line-array technology since the M series release 15 years ago, and only hit the market in 2014, making the ASC one of the first permanent venue installations,” Stermer said.

Meyer was a frontrunner in developing line-array technology, which redefined the way large audiences are covered from an audio standpoint. This meant essentially configuring more speakers in a linear array and dedicating each to cover only a few rows of audience, instead of using large speakers and volume to reach the back rows. Every reputable public address, or PA, manufacturer in the world now designs around the line-array principles, he says. This design allows for the back rows to enjoy the same sound quality as the front row, and eliminates “hot spots” at the front. It also removes many of the audio-pollution elements that result from broad-coverage speakers.

The world’s most prestigious halls, from Oslo to Jerusalem to Hong Kong, feature Meyer audio systems. Eastman Kodak Hall, Lincoln Center and Carnegie Hall are proud of their Meyer sound support, and the ASC has now joined that club of excellence and discrimination.

“The biggest difference now between the ASC and those venerable halls is that our Meyer system is better, newer and of a recognizably different generation,” Stermer said. Read more about Meyer at www.meyersound.com.