by Shannon Thomason
At least 2,724 students will graduate this spring, and more than 1,200 are expected to participate in UAB’s two spring commencement ceremonies at Bartow Arena. 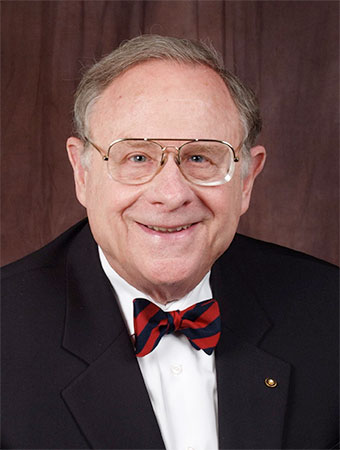 Charles Collat will be awarded the President's Medal  Two commencement ceremonies and a doctoral hooding for the University of Alabama at Birmingham are set for Saturday, April 25. At least 2,724 students will graduate this spring.

The UAB Graduate School’s hooding ceremony is set for noon at UAB’s Alys Stephens Performing Arts Center. The ceremony is for students earning doctorates in education, philosophy, public health and science. For spring 2015, the university’s highest degree will be conferred on 60 students from 14 states and five countries in 25 disciplines; 48 will participate in the ceremony. The speaker will be Professor of Nursing; Chair of Acute, Chronic and Continuing Care; and Assistant Dean, Clinical Simulation and Technology in the UAB School of Nursing Jacqueline Moss, Ph.D. Moss will also bear the academic mace for the ceremony.

For the first time in its history, UAB will honor newly commissioned officers from the Air Force and Army Reserve Officer Training Corps during the two undergraduate and graduate commencement ceremonies April 25. Cadets, as well as service members and veterans in the graduating class, will stand and be recognized at graduation. This ceremony is also the first to include a graduate with a Bachelor of Science degree in public health.

A to-do list for graduates, as well as information for guests, is available on the commencement website. Tickets are not required; but seating is first come, first served. Arena doors will open at 8:30 a.m. for the morning ceremony and at 1 p.m. for the afternoon ceremony. University officials recommend guests leave nonessential bags at home or in the car. The ceremonies will be recorded and added online for viewing at www.uab.edu/commencement about a week after the ceremonies.

The bearer of the UAB academic mace for both commencement ceremonies will be Trygve Tollefsbol, Ph.D., D.O. Tollefsbol is a professor in the Department of Biology at UAB and a senior scientist in the UAB Comprehensive Cancer Center, Comprehensive Center for Healthy Aging, Nutrition Obesity Research Center and the Comprehensive Diabetes Center. He is director of the UAB Cell Senescence Culture Facility, which he established in 1999. He has published more than 120 articles related to the fields of epigenetics, aging and cancer. He was awarded this year with UAB’s Caroline P. and Charles W. Ireland Prize for Scholarly Distinction, presented to a full-time faculty member for professional and academic achievements and contributions to the university and local community. 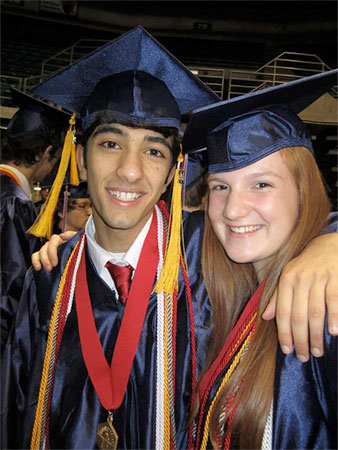 UAB spring 2015 commencement undergraduate speakers Ameen Barghi and Alicja Maria Foksinska at their graduation from Oak Mountain High School, where they were voted "Most Presidential."Charles A. Collat Sr., UAB’s largest philanthropic supporter, will be awarded the President’s Medal at the 2 p.m. ceremony in recognition of his humanitarian deeds. Collat is chairman emeritus of Mayer Electric Supply Co., Inc., one of Birmingham’s largest privately held corporations, established in 1930 by Ben S. Weil, Patsy Collat’s father. Mr. and the late Mrs. Collat have funded UAB programs through personal contributions as well as gifts from Mayer Electric Supply and the Mayer Electric Supply Foundation. The Collats’ gifts have spanned across many areas of UAB, including naming the Collat School of Business and the Collat Chair in Neurosurgery, funding UAB Athletics, the UAB Center for Palliative and Comfort Care, AIDS research, Alzheimer’s disease research, and ophthalmologic and cancer research; and providing support for the schools of Business, Education, Engineering and Medicine.

Each ceremony will include an undergraduate and graduate speaker. Both of UAB’s undergraduate graduation speakers, Ameen Barghi and Alicja Maria Foksinska, attended Oak Mountain High School, where they graduated together and were named “Most Presidential” their senior year.

Ameen Barghi will be the undergraduate commencement speaker for the morning ceremony. He graduates with a Bachelor of Science degree in neuroscience and translational research. Barghi was elected to the Rhodes Scholar Class of 2015 and will start his graduate education at Oxford University next fall before attending medical school. He was admitted to UAB’s Early Medical School Acceptance Program. As a sophomore, Barghi won a Goldwater Scholarship. He is in the UAB Honors College’s Science and Technology Honors Program, as well as the Business Honors Program at the UAB Collat School of Business. He speaks several languages and has done health-related work in Eastern Europe and the Middle East. For six years, he has been working with stroke, MS and traumatic brain injury patients using neuro-rehabilitation techniques developed at UAB. He is interested in developing clinical imaging systems and software technologies that could allow for earlier diagnosis of progressive diseases as well as working in the public health-policy sector.

Elizabeth Simmons will be the graduate commencement speaker for the morning’s ceremony. She graduates with a Master of Arts degree in English with a concentration in literature. She also has a master’s degree in ESL education from UAB, a juris doctorate from the University of Alabama and a Bachelor of Arts degree in French from Auburn University. Simmons was recently selected by the Department of English as the Graduate Student of the Year for 2014-2015. While completing her master’s in English, she served as a graduate teaching assistant, writing tutor and assistant to the UAB University Writing Center director. Simmons was a practicing attorney for many years before deciding to focus on education and student development. After graduation, Simmons will work as an assistant director at UAB’s Career and Professional Development Services.

Alicja Foksinska will be the undergraduate commencement speaker for the afternoon ceremony. She graduates Summa Cum Laude with a Bachelor of Science degree in information systems and business management with the concentration of business administration. Foksinska is a member of the UAB Honors College’s Global and Community Leadership Honors Program, Business Honors Program and the Presidential Honors List. She has been an active student leader in campus organizations, including vice president of the Collat School of Business Student Leaders, chief marketing officer and industrials and materials sector analyst for the Green and Gold Fund, and a student tour guide for the UAB TrailBlazers. Foksinska was a research assistant and teaching assistant. Throughout college, she held a part-time job as an administrative assistant at the Diocese of Birmingham. She was a fund development coordinator intern at The Bell Center and an international recruitment intern at UAB. During her free time, she focused on her research, especially in the service-learning realm, which led her to present at research expos and conferences, including the Gulf South Summit. She is currently an IT internal auditor at Protective Life Corp. After graduation, she will continue her career at Protective Life while working toward her information systems auditor certification. She plans to remain active in the Birmingham community, especially with The Bell Center, an early intervention program for children with developmental delays.

Harsh Shah will be the graduate commencement speaker for the afternoon ceremony. He graduates with a Master of Public Health degree in health care organization and policy. He received his Bachelor of Science degree in biology from UAB in April 2014 and will be graduating with a 4.0 GPA in both programs. Shah is a member of the UAB Honors College’s University Honors Program. He is a member of the Birmingham Blazin’ Bhangra and the UAB Rangeela dance groups, and a member of the Alpha Epsilon Delta National Pre-Health Honors Society. During his collegiate career, he worked as a research assistant in the Department of Biology, Howard Hughes Phage Program and the Department of Preventive Medicine. He has been an ACT exam preparation tutor, and has a strong connection to helping the underprivileged as a volunteer with Project Downtown, Students for a Healthier Community and Highlands United Methodist Church. He plans to pursue a career in medicine, and will attend the UAB School of Medicine on a full academic scholarship.