by Adam Pope
The University of Alabama at Birmingham’s School of Dentistry Alumni Association has named J. Calvin McCulloh, DMD, the recipient of the 2015 H. Moren Fuller Award. 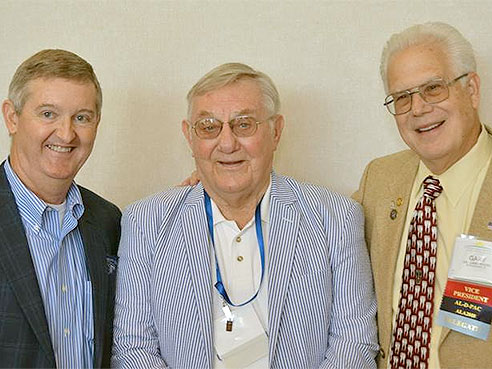 The 1956 School of Dentistry graduate received the award June 12 during the Alabama Dental Association’s annual meeting in Orange Beach, Alabama.

“I am flattered and honored to have been considered for the Fuller Award,” McCulloh said. “There are so many deserving people who have been honored with this award, and I’m extremely proud to have received it.”

After completing two years of military service with the U.S. Air Force, McCulloh opened a general dentistry practice in Vestavia Hills in 1958 and continued that practice until 2000. He then began teaching at the School of Dentistry and retired in 2010.

In 2000, McCulloh was the first recipient of the Birmingham Dentist of the Year award. He was also the first dentist to serve as Southeast regent for the American College of Dentists, from 2002 to 2006, and is a past president of the Alabama Dental Association and the Birmingham District Dental Society.

Even after receiving multiple honors and awards throughout his years of work, the West Point, Georgia, native says one thing he always remembers from his time as a student and teacher at UAB is to put service above self.

“The patient in the chair is always the most important person on earth,” he said.

The Fuller Award is named for Dr. H. Moren Fuller, one of the first members of the school of dentistry advisory board.

The UAB School of Dentistry is one of the premier schools of dentistry in the United States, dedicated to leading oral health care by educating dental clinicians, strengthening a nationally ranked research program and expanding a patient-centered clinical practice. The Alumni Association’s mission is to support the school and provide outstanding programs and services for its graduates.