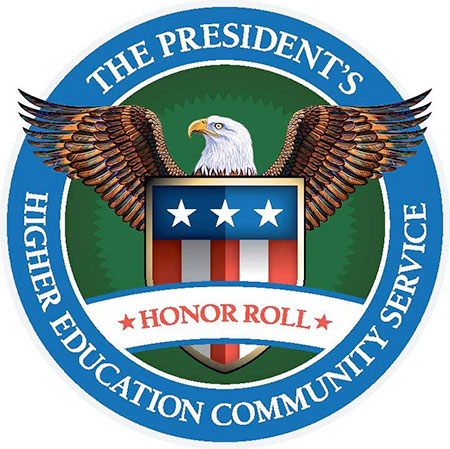 Collaboration and local and global community involvement have earned the University of Alabama at Birmingham a spot on the 2014 President’s Higher Education Community Service Honor Roll.

Each year, the president of the United States recognizes higher-education institutions that reflect the values of exemplary community service and achieve meaningful, measurable outcomes in communities through service. Honorees are selected based on a number of factors, including scope and innovation of service projects, faculty, staff and student participation, and the extent to which academic service-learning courses are offered at the school.

UAB was recognized in three categories for the 2012-2013 academic year: general service, economic opportunity and education.

“As one of the five pillars central to UAB’s mission, community service is a high priority and a critical element of our identity,” said UAB President Ray L. Watts, M.D. “Giving back to our community is essential and highly beneficial to our local and global community, as well as our students, faculty and staff.”

During the City of Birmingham’s “50 Years Forward,” a commemoration of the seminal events of the 50th anniversary of the U.S. Civil Rights Movement, UAB sponsored more than 20 community engagement events, including the StoryCorps Griot Initiative. UAB Digital Media students collected interviews with African-Americans in the Birmingham area in an effort to preserve stories for an oral history collection.

All interviews recorded as part of the Griot Initiative are archived at the Smithsonian’s National Museum of African American History & Culture and stored at the American Folklife Center at the Library of Congress. The interviews are also housed at UAB’s Sterne Library Digital Collections.

That effort, along with Into the Streets, a student-led annual day of service that inspires the student body to participate in community service projects around the Birmingham area, helped UAB make the list for general service.

UAB’s Global Health Service Learning program also influenced the general service honor. The courses allow students to apply academic skills, critical thinking and creativity to a real community health problem while earning academic credit. It gives students the opportunity to work with students from other academic areas while collaborating with a partner organization to address an issue identified by the community.

“In addition to each of the colleges’ efforts, UAB’s entire campus infrastructure supports community engagement,” said Libba Vaughan, director of Service Learning. “That infrastructure includes the Office of Service Learning, which coordinates service-learning courses across campus. The Office of Student Involvement and other offices coordinate weekly and monthly civic engagement and service opportunities for students.”

UAB’s economic impact extends beyond being the state’s largest employer. Service projects and initiatives by faculty, staff and students are also drivers. Each year, student members of the UAB Collat School of Business chapter of the National Association of Black Accountants volunteer for United Way’s Volunteer Income Tax Assistance program to provide free income-tax preparation to families making less than $49,000 a year.

2013 was the sixth year in a row UAB partnered with the IRS-sponsored program. The program, as a whole, secured more than $2 million in tax refunds for Greater Birmingham residents. More than 2,000 tax returns were filed, and the average income of clients served was $20,680. It was estimated that $462,000 was saved in tax-preparation fees. Due to the success of the program, the Collat School of Business was awarded two grants totaling $26,000 from PNC Bank that will continue its community work and launch a program that introduces high school students to business careers. The grant funds will be used to expand the program’s reach by recruiting more student tax preparers and helping more Alabamians. Monies will also be used to acquire computer equipment and to advertise the program to the broader Birmingham community.

This, along with the 2012 creation of the Community Health Innovation Awards, put UAB on the economic opportunity honor roll. The Community Health Innovation Awards is an annual grant competition established by the Center for Clinical and Translational Science. Grants ranging from $5,000 to $25,000 are awarded to local organizations whose ideas creatively address community issues.

This year, with the help of $15,000 from CHIA, Anthony Hood, Ph.D., and his wife, Robin, were able to launch NHabit Bush Hills, an effort to create a “Craigslist”-style database of empty and abandoned properties and their conditions in Birmingham’s Bush Hills neighborhood.

In 2014, David VanWilliam, a master carpenter in Birmingham, was able to launch the Community Carpentry Project in the Inglenook neighborhood, with the help of a $25,000 grant from CHIA. VanWilliam teaches carpentry to young adults. The inaugural class of 12 students, ages 18-25, completed the program with enough knowledge and training to be qualified for a job as a carpenter’s helper or to pursue advanced carpentry education.

UAB also launched the Area Health Care Education Center program in 2012 to expand access to primary care in Alabama — especially for rural and other underserved populations. The program works to recruit, support and retain health care professionals in all 67 Alabama counties.

The UAB School of Education’s Girls in Science and Engineering Day and the Collat School of Business Birmingham Business project also helped the university secure a spot on the education honor roll.

Girls in Science and Engineering Day is a unique, free event created by two UAB students in 2011 to inspire and empower Birmingham-area middle school girls to achieve and excel in science and engineering fields. It is a day for local middle school girls to come to UAB and participate in fun science and engineering activities led by women who are professors, scientists and students from UAB and the surrounding community. This year’s GSED was again a success, and planning for 2016 is underway.

As Birmingham commemorated the seminal events of the Civil Rights Movement in 2012, the School of Business Student Scholars program joined juniors and seniors from two area high schools to examine ways the movement affected business in the city. Using archives and data on demographics, employment and key industries, students compiled an analysis of each decade to benchmark against the economic development of nearby Atlanta, Memphis and Nashville.

UAB has been on the President’s Higher Education Community Service Honor Roll since 2006.