Many patients diagnosed with type 1 diabetes as adults do not fit the standard profile for a diabetes diagnosis; they are younger, are relatively fit and have little if any belly fat.
As the year draws to a close, UAB News looks back at some of the top stories of 2015. See them all here. This story was originally published July 10, 2015. 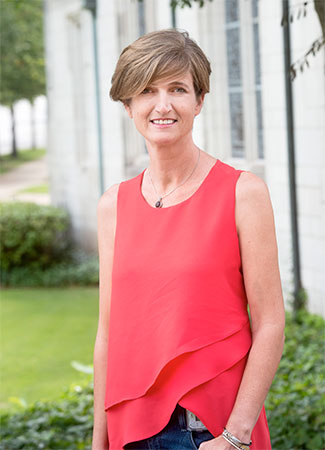 Joy MyersJoy Myers felt miserable, and her first trip to an urgent care clinic one Friday last fall explained one of the reasons — strep throat.

Myers received an antibiotics prescription and went home, where she started to drink Gatorade and orange juice and eat chicken noodle soup in an effort to get better. When she had not improved by Tuesday, her employer sent her back to the doctor, and she tested positive for flu, too. Myers left the doctor’s office feeling so bad, so weak, that she called her husband, Matthew, to come pick her up and drive her home.

A nurse from the urgent care clinic called Myers’ home the next day and told her husband to get her to a hospital immediately. Blood test results revealed she was experiencing ketoacidosis. In fact, her sugar levels were approaching 800; normal levels are considered to be between 80 and 120. When her husband went to get her, she was barely responsive.

“When Matthew came in and checked on me, and I didn’t even know my own name at that point,” Myers said. “He called the ambulance, and fortunately, they got me to the emergency room in time. It’s actually very miraculous that I’m still here.”

Myers was in an induced coma for nine days as caregivers sorted out her condition. When she awoke, she received a shocking diagnosis. While the strep throat and flu no doubt made her sick, what almost killed her was immediate-onset adult type 1 diabetes — a condition a healthy 41-year-old adult does not expect to receive.

“Emotionally, it was hard, very hard,” Myers said. “It still is.”

Myers’ troubles happened in November 2014, the same month the University of Alabama at Birmingham Comprehensive Diabetes Center announced it would be enrolling patients in a clinical trial designed to test whether the common blood pressure medication verapamil could be a potential treatment option for those with type 1 diabetes. The trial will test an approach different from any current diabetes treatment by focusing on promoting specialized cells in the pancreas called beta cells, which produce insulin the body needs to control blood sugar. UAB researchers have used verapamil to successfully reverse diabetes in mice.

Anyone diagnosed with type 1 diabetes within the past three months is encouraged to contact UAB at T1DM@uab.edu or 205-934-4112 to see whether they qualify for the study.

The double-blind placebo trial has enrolled 10 of 52 needed subjects, and one of the first was Myers.

“It was really my best friend, Deirdre Lewis, who heard about the study and encouraged me to investigate,” Myers said. “After talking it over with my family and doctors, I connected with the people here at UAB and, fortunately, was able to enroll.”

Adults can be misdiagnosed

“These are patients who don’t fit the standard profile for a diabetes diagnosis, and are often misdiagnosed with type 2 if diabetes is determined,” Ovalle said. “The patients who are presenting with type 1 are healthy-looking younger adults. They don’t have much, if any, belly fat. They look fit, and that should be a sign for physicians that what they may be seeing is actually the beginning stages of type 1 diabetes, not type 2.”

When type 1 diabetes starts in adulthood, its symptoms usually come on quite suddenly and are the same as those that occur in children with type 1 diabetes; they include weight loss, constant thirst and urination, and nausea. Being diagnosed correctly and starting insulin therapy immediately is of utmost importance for people with type 1 diabetes because their pancreas is no longer producing any insulin — or virtually none — and diabetic ketoacidosis can set in quickly, as it did with Myers.

Most newly diagnosed cases of diabetes are type 2 diabetes, which accounts for 90-95 percent of all diabetes cases. The incidence of type 1 diabetes, which accounts for about 5-10 percent of all diabetes cases and is not generally thought to be linked to overweight or obesity, is also on the rise, albeit at a slower rate than type 2 diabetes. That means that people with type 1 diabetes are still a distinct minority within the population of people who have diabetes.

“I was really lucky, I think,” Myers said. “I don’t believe my sugar was running high for long at all. I had an immediate onset of adult type 1 diabetes. My understanding is that my immune system was too busy fighting other infections to protect my pancreas. I could have gone my whole life without becoming diabetic, but the possibility was always there. My tipping point just happened to me when I was 41 years old.”

Oral medicines that lower blood glucose in people with type 2 diabetes are not effective in people with type 1. But UAB scientists have uncovered that the common blood pressure drug verapamil can lower what is known as TXNIP levels in beta cells located within the pancreas — to the point that, when mouse models with established type 1 diabetes and blood sugars above 300 milligrams per deciliter were treated with verapamil, the disease was eradicated.

More than a decade of basic-science breakthroughs in the lab of Anath Shalev, M.D., director of UAB’s Comprehensive Diabetes Center and principal investigator of the verapamil clinical trial, led to this new study at UAB. Based on these findings, the UAB Comprehensive Diabetes Center was awarded a three-year, $2.1 million grant from the JDRF to conduct a human clinical trial to test the effects of verapamil in adult patients with new-onset type 1 diabetes. The trial is testing an approach different from any current diabetes treatment by focusing on promoting the patient’s own beta cells.

“Currently, we can prescribe external insulin and other medications to lower blood sugar; but we have no way to stop the destruction of beta cells, and the disease continues to get worse,” Ovalle said. “If verapamil works in humans, it would be a truly revolutionary development in a disease affecting more people each year to the tune of billions of dollars annually.”

Myers hopes her life’s turn of events, coinciding with the start of the clinical trial, is a sign that this research is indeed critical to the future of diabetes treatment.

“In my mind, being a part of this trial means that this might have happened for a reason — that I might have an impact on someone else’s life,” Myers said. “And whether this trial proves or doesn’t prove anything, it’s going to add to the data, add to the knowledge. That’s important to me.”

Myers is learning more about her disease every day and how it affects her body. Her blood sugar fluctuations and monitoring her glucose levels have given her difficulties and frustrations at times, she says.

As part of the study, Myers has a continuous glucose monitoring system that enables her to measure her blood sugar 24 hours a day, seven days a week. Myers says adjusting to the fact that she has to monitor her levels and what her body is telling her has been one of the most difficult things with which she must come to grips.

“Because of this study, I have a lot of great, helpful tools; but I have to say the toughest part of my diagnosis is having to pay attention all the time, and constantly having my glucose monitoring system attached,” she said. “With diabetes, you don’t have the option to say, ‘Oh, I’m just not going to think about it today.’ You have to. It’s always there.”

Patients enrolled are randomized to receive verapamil or a placebo for one year while continuing with their insulin pump therapy. Because the trial is double-blind, UAB caregivers will not know if their patients received the verapamil or placebo until all patients have completed the trial.

Myers admits to wondering which she is receiving; friends often ask her how she is feeling since she has started treatment and whether she can tell a difference.

“I hope this leads to a cure, and I do think about it, and whether it’s working. If it makes this condition better for me over my lifetime, then great,” Myers said. “I also know that I have to be realistic and know that, either way, this may or may not change my outcome. But for that 9-year-old, 12-year-old, 20-year-old — five years from now, 20 years from now — if it happens, it’s going to be great.