by Shannon Thomason
New improvements and enhancements will enable the Alys Stephens Center to transform the Jemison Concert Hall into a proscenium theater perfect for larger dance performances, and the center will be fully re-carpeted with the original design and materials. 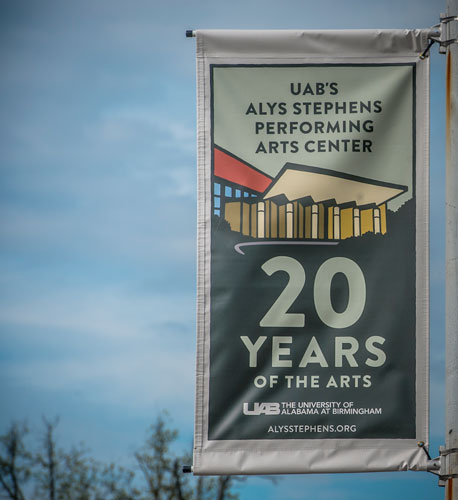 In celebration of its upcoming 20th anniversary season, the University of Alabama at Birmingham’s premier Alys Stephens Performing Arts Center is being rejuvenated.

New wool carpeting, custom-milled using the original company, design and materials, is in the works, and new draperies, lighting and flooring to transform the Jemison Concert Hall into a proscenium theater perfect for larger dance performances have been installed, says Executive Director Anna M. Thompson. Among other improvements are a new digital sign in front of the building and new street flags.

Thanks to a gift from Jane S. Comer, the ASC now can employ features in the Jemison Concert Hall never before seen in the past 20 years of presenting. This gift includes a new drapery and lighting system to enhance performances and expand the center’s potential to accommodate the extensive technical production needs of all forms of performance, and dance in particular. The hall now has a new marley floor, which is a double-sided, smooth, portable floor ideal for dancing and stage use.

The Jemison Concert Hall enhancements afford the performance space the ability to be a proscenium theater, where an arch separates the audience from the stage and creates an invisible fourth wall. The installation of a true grand drape, 70 feet wide, 32 feet tall and fully retractable, offers the capability of closing the front of the stage for scenic shifts, which adds drama and the ability to reveal in a few moments the contents of the stage. The new grand drape extends from the catwalk with trusses, and the drape silently travels across the stage. Selected in a beige color, the grand drape blends with the stage backdrop.

With the additions, the Jemison Concert Hall has become an incredibly versatile space, capable of exhibiting the world’s finest artists and performers in music, theater, multimedia and, now, dance.

“It is an exciting time, from a technical theater point of view,” Thompson said. “This allows us to expand our capabilities, to present dance in a way that we never could before. We can light it properly and present dance companies in our largest venue.”

The new carpet, created in the same iteration as the distinctive red, patterned original carpet, is a gift from EBSCO Industries Inc. and its employees. This summer, in preparation for the beginning of the 20th anniversary season, the first phase of carpet installation will include the lobbies and the Abroms Patrons Lounge, which will be done during a two-week period. The second phase will take place over two weeks in December and will include the center’s Jemison Concert Hall, Sirote Theatre and Reynolds-Kirschbaum Recital Hall. By year’s end, all carpeting in the building will be new.

Alys Robinson Stephens  It takes four months to custom-mill the carpeting, done by the original England-based company that milled the carpet more than 20 years ago, Thompson says.

“We still have the color swatches, and they still have the pattern,” Thompson said. “All of the carpeting will be milled and shipped at once, which is much more cost-effective.” The carpet has withstood the test of time, with more than 100,000 visitors a year over the past 20 years treading upon it. But new carpet will renew and invigorate the building’s interiors.

The double-sided, programmable digital sign, which will be nestled among freshly landscaped garden beds out front, will tout the center’s happenings. The purchase of the sign was made possible through a special fund set aside by UAB.

The new street flags, celebrating the ASC’s 20 years, are now hanging from street posts on the 10th Avenue block and throughout the area known as UAB’s cultural corridor. 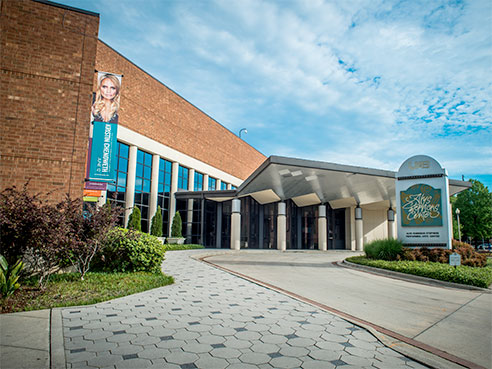 In 2015, the Alys Stephens Center installed a new Meyer sound system, the LYON array, part of the brand-new LEO series. That series is the first complete overhaul of Meyer line-array technology since the M series release 16 years ago. It hit the market in 2014, making the ASC one of the first permanent venue installations. The world’s most prestigious concert halls, from Oslo to Jerusalem to Hong Kong, feature Meyer audio systems. Eastman Kodak Hall, Lincoln Center and Carnegie Hall are proud of their Meyer sound support, and the ASC is now included in that club of excellence and exclusivity.

“So many of the renewals we have done are efforts that are very expensive but make a difference in the competitive marketplace,” Thompson said. “Our sound system is amazing. Twenty years ago, things were not even digital.”

The Jemison Concert Hall, an acoustic wonder and one of the finest concert halls in the nation, if not the world, offers tremendous clarity with all the nuance and tone presented by premier musicians. This acoustic perfection is the result of painstaking design of every surface, structure and form — from contoured and textured blocks to an integrated sound shell, to deployable curtains — to tune the hall for the unique acoustic needs of each performance, regardless of genre.