Kevin Franks will earn his degree in mechanical engineering this weekend, becoming the sixth family member to graduate from UAB.
As the year draws to a close, UAB News looks back at some of the top stories of 2016. See them all here.
Written by: Katherine Shonesy
Need more information? Contact us 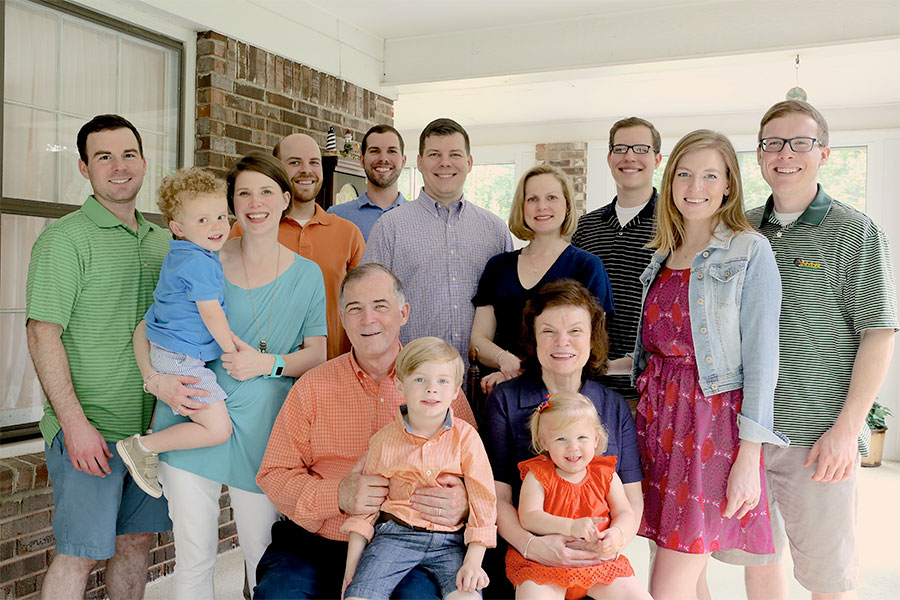 Blount County parents Woodrow and Margie Franks will watch the youngest of their six sons — who have all attended the University of Alabama at Birmingham — graduate this weekend. Each of the six Franks brothers has received an undergraduate degree from the university, spanning nearly two decades of studying at the campus.

On Saturday, April 30, Kevin Franks will be the final Franks brother to cross the stage at Bartow Arena and receive his degree.

“I thank God that my sons were blessed with the opportunities they had while at UAB,” Margie said. “They’re an important part of our life, so we were thankful that they didn’t have to look far from home to find a world-class education.”

“Having my last son graduate brings as much joy as having my other sons graduate. I am equally proud of each son,” Woodrow said. “There is a relief that all were given the opportunity to attend a great university, and each one obtained a degree that provides knowledge necessary to participate in their chosen career.” 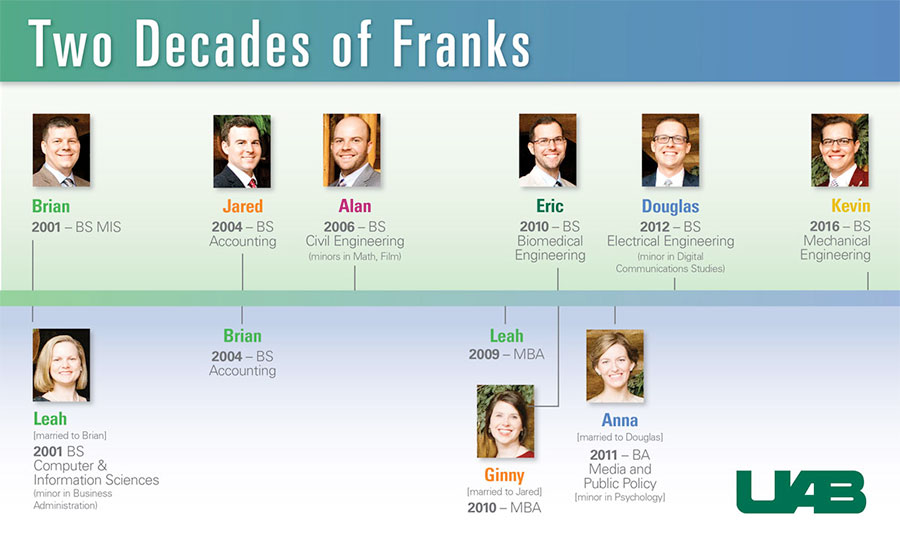 The first of the six brothers, Brian began his education at UAB in 1997. He first pursued and received a degree in management information systems in 2001, and then pursued a second undergraduate degree in accounting, which he received in 2004.

While Brian was pursuing his first degree, the next brother in line, Jared, started at UAB on the same path Brian took for his second degree, in accounting. The two brothers graduated with the same degree in the same year. During his years at UAB, Jared served as a UAB Ambassador and a UAB Trailblazer and was a member of the UAB Honors’ College University Honors Program.

Alan, the third of the six brothers, began his education at UAB while Brian and Jared were still on campus. Alan took a departure from his two older brothers’ paths in the Collat School of Business and became the first brother to study in the School of Engineering. He was a Fulbright Scholar, a member of the University Honors Program, president of Tau Beta Pi and vice president of Chi Epsilon. In 2006, he graduated with a degree in civil engineering, and minors in mathematics and film.

“UAB set the stage for my career path, beginning with my interdisciplinary experience in the University Honors Program,” Alan said. “It shifted my mindset to approach my education in broader terms, finding ways to overlap multiple fields that interested me. The result was my focus in science communication, combining my engineering degree with my film experience.”

As Alan was finishing up his degree, the fourth brother, Eric, arrived in Birmingham to attend UAB. Eric followed in Alan’s footsteps as the first brother to get an engineering degree, and pursued a degree in biomedical engineering, while also serving as a resident assistant and orientation leader, graduating in 2010.

“UAB started out as just a university to me,” Eric said. “As I started getting involved in extracurricular activities, I met amazing people who I still consider family even to this day. Some of my happiest memories come from the relationships I was able to build while attending UAB.”

During Eric’s tenure at UAB, Douglas, the next brother in line, started at UAB and, continuing the family’s interest in engineering, graduated in 2012 with a Bachelor of Science degree in electrical engineering, as well as a minor in digital communication studies. Douglas was a member of the University Honors Program and the Institute of Electrical and Electronics Engineers student chapter.

Kevin arrived as the last Franks family member to attend UAB the same year Douglas graduated. Kevin, who will graduate with a degree in mechanical engineering this weekend, was a member of the University Honors Program and UAB’s chapter of the American Society of Mechanical Engineers, and also served as a resident assistant. He has decided to continue his education at UAB and pursue his master’s degree in the same field. 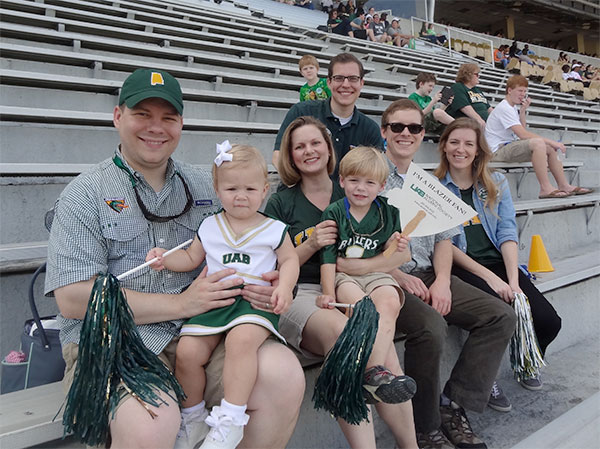 Waiting for the game to start, from left, Brian holding Adeline, Leah holding Graham; Kevin in back; Douglas and AnnaWhy UAB?

“I chose UAB because Birmingham feels like home, and I love being in the city,” Kevin said. “The relationships formed with faculty, colleagues and friends are what I’m taking away; but it’s not coming to an end. I’ll be continuing my work with engineering professor Dr. Dean Sicking, who allowed me to participate in undergraduate research in his lab analyzing football video of real-world helmet-to-helmet impacts, assisting in the creation of safer football helmets. As a graduate student, I’ll get to continue that research, getting more and more real-world experience that I couldn’t get anywhere other than UAB.”

Many of the brothers echoed Kevin’s sentiment that the university’s location was a major factor in their decision to attend.

“Internship opportunities and job prospects seemed much stronger at UAB given its urban setting,” Alan said. “Collaboration between UAB and area companies opened the door for me to work at a Fortune 500 company during much of my undergraduate experience.”

“Because of its urban location, UAB offered opportunities for internships and other programs that allowed practical application of several majors and fields of study,” Jared said.

The opportunities afforded to several of the brothers by acceptance into the University Honors Program also played a big role in their time at UAB.

“I had a wonderful undergraduate experience at UAB because I was able to become involved in so many great organizations,” Jared said. “I especially enjoyed my time in the University Honors Program, which is an incredibly unique organization. I consider myself fortunate to have been a student of Ada Long, the founder of UHP. She’s a visionary, and I, among many others, am in her debt as the recipient of a captivating and unforgettable educational experience.” 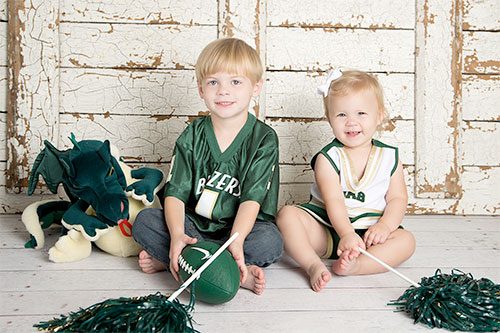 The family’s ties to UAB remain strong, even with the last of the six brothers graduating this weekend. Alan works as an assistant professor in UAB’s Department of Communication Studies in the College of Arts and Sciences, where he teaches visual media.

Three of the brothers are now married — to UAB graduates, and naturally, UAB is the common thread that brought these three couples together.

Douglas’ wife, Anna, a 2011 UAB graduate, now works at UAB as a digital media specialist. Douglas and Anna, who was Ms. UAB 2008-2009, met at UAB in ethnographic filmmaking class and have been together ever since.

“I’m very glad I attended UAB,” Douglas said. “I made a lot of lasting friendships through the University Honors Program, received a great engineering education, was able to obtain real-world engineering experience interning with Southern Company, learned about and got plugged into the community, and to top it off met the lovely lady who would later become my wife.”

Ginny, married to Jared, attended UAB to receive her Master of Business Administration degree to vary her education experiences after receiving her undergraduate degree from Samford University. Jared and Ginny now have one son, Colin.

Leah, married to the oldest Franks brother, Brian, is a two-time UAB graduate. Leah received her undergraduate degree in computer and information sciences and then her Master of Business Administration degree, and served as a UAB Ambassador at the same time Brian’s younger brother Jared was serving in that same organization. Brian and Leah have two young children, Graham and Adeline.

“Brian and I went to the same high school, but never really talked until we had a class together at UAB and did a group project together,” Leah said. “We casually kept in touch after that class, but it wasn’t until after we graduated that we discovered we had a mutual UAB friend and reconnected. Years later, after we were married and I was in grad school, I met Ginny and set her and Jared up on a blind date. Blazer spirit is something special that we all share as a family.”

Over the years, the family has enjoyed time together at UAB football and basketball games, and has found that UAB is something they all have in common and are very passionate about. This Saturday, they will once again share a UAB experience when they sit together in the stands at Bartow Arena to watch one last Franks brother receive his degree.