The UAB Blazers men’s golf team has hit big, competing in this year's NCAA Championships and turning out pros including Graeme McDowell and Paul Dunne. Learn how competitive practice sessions and world-class courses help to power their success, and get a few tips to improve your own golf game.
From UAB Magazine


One of the quietest sports has been creating a lot of noise for UAB. The Blazers men’s golf program has attracted international attention in recent years, thanks in large part to the success of former UAB golfers Graeme McDowell and Paul Dunne. McDowell got the golf ball rolling by winning the 2010 U.S. Open, widely considered the sport’s most difficult tournament. Then, in July 2015, Dunne nearly became the first amateur to win the British Open in 85 years, holding a share of the lead entering the final round.

These exploits alone would have generated national publicity for the Blazers. But since McDowell is originally from Northern Ireland and Dunne is a native of Dublin, media outlets throughout Europe also have been mentioning UAB a lot lately.

“Athletics is a huge window to a university,” says UAB head golf coach Alan Murray, another Ireland native who took over the program from Alan Kaufman in 2013. “Those guys are at the forefront of UAB’s worldwide presence from a sporting perspective. To have them bursting onto the scene and representing UAB gives us a much higher golf profile.”

The program began reaching a new level following Kaufman’s arrival in 1998. His 2000-2001 team became the first from UAB to qualify for the NCAA Championship, finishing tied for 12th in the nation. That squad was led by McDowell, the first UAB player to be ranked number one in collegiate golf.

Now the Blazers make regular appearances in the NCAA Championship, having made the finals three of the past four years, and Murray was named the national Coach of the Year by Golfweek for the 2013-2014 season.

“This program is at a place where we’re competing on a national level, and a lot of credit for our success has to go to the guys who were here in the early years,” says Murray, who spent three years as an assistant coach under Kaufman. “They did a lot of the grunt work, and we’re benefiting from that.” 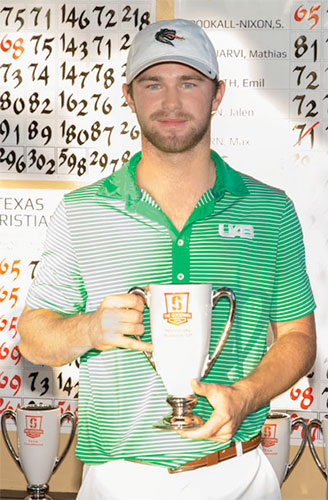 Cannon won Individual Runner-Up at The Goodwin tournament in Palo Alto, Calif., in 2015.The next great golfers

Murray says his recruiting pitch to high-school golfers is relatively simple: Come to UAB to get a great education, play golf on world-class courses such as Shoal Creek Country Club, and have a chance to follow in the cleat marks of players who have found success on the PGA Tour.

“Graeme and Paul have both said that the UAB experience was beneficial for their development as a golfer,” Murray says. “For guys who want to play golf at the next level, if you can come and be the top player on our team, then you have a really good chance of making it.”

That certainly appealed to Will Cannon, a senior on this season’s team who joined the program out of Hoover, Ala., in 2012. He said his game has improved significantly at UAB. “What’s helped me as much as anything is just watching Paul and some of the other guys in practice,” says Cannon, a finance major. “Their game is so good. To be around that every day and compare yourself to that, it pushes you to be better.”

Indeed, Cannon says the practices can often be more competitive than actual tournaments. Murray will set up scenarios, usually involving chipping or putting, and the players will spend several hours each day working on that one aspect of their game. :We probably spend 95 percent of our practice on the putting green,” Cannon says. "We have a lot of closest-to-the-pin competitions involving almost any shot around the green imaginable. We’ll hit 100 different chip shots in a practice session. It’s the same way with putting. We’ll do different putts from different distances. Everybody is trying to beat each other, so it gets very competitive."

The results are evident come tournament time. The Blazers began this season with a third-place finish at the prestigious Kiawah Island (S.C.) course, and then a few weeks later broke multiple tournament records in winning the Shoal Creek Invitational for the first time in the event’s eight-year history.

"People now know that if UAB is in a golf tournament, that means a pretty good team will show up," Murray says. "We’re not going to win everywhere we go, but we’re always competitive. We can give anyone a game."