The 200-member-strong band is rehearsing its show of hit soundtrack tunes, “Hollywood,” for performances at UAB football games, exhibitions and parades. 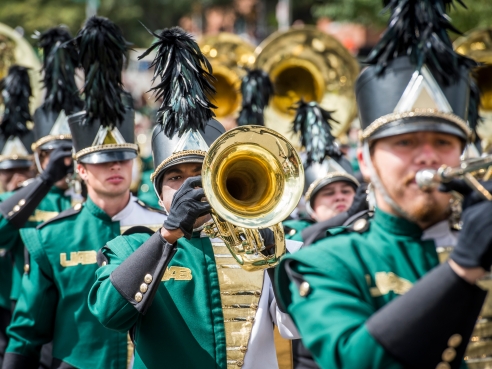 UAB Marching Blazers  The University of Alabama at Birmingham Marching Blazers are training this week for a full schedule of performances this fall, topped with an invitation to perform in Rome.

The camp this week means nine- and 12-hour days of rehearsals and marching for the 200-member-strong, award-winning band in preparation for their fall 2016 show, “Hollywood.” They will perform parts of the show at coming Blazer Football Green and Gold games to be played at the BBVA Compass Field, says Interim Director of Bands Gene Fambrough, DMA. There are not additional scheduled campus performances for the marching band.

“Our show will feature famous music from the movies ‘Back to the Future,’ James Bond, ‘Mission: Impossible,’ ‘Canned Heat’ from ‘Napoleon Dynamite,’ ‘The Avengers’ and ‘Star Trek,’” Fambrough said. “There will be snippets from other movies inserted into the show for the enterprising listener. We’re working to have someone perform Napoleon’s dance to ‘Canned Heat’ for that part of the show.”

Their schedule also includes performances at high school competitions, in addition to the Green and Gold games scheduled this fall. The Marching Blazers have also been invited to march in the World Peace Parade in Rome, Italy, for the New Year’s Day celebration. About 50 members of the band will travel to Italy to participate. The band is part of the College of Arts and Sciences’ Department of Music.

The UAB Marching Blazers 2016-2017 schedule of performances is:

The band will march in a parade at Six Flags Over Georgia, followed by a day at the park, and in a parade for the Atlanta Falcons Youth Football League, leading them from Centennial Park to the Georgia Dome prior to their game against the Arizona Cardinals on Sunday, Nov. 27.

The Marching Blazers Fund for Excellence has raised more than $33,000 of a $70,000 goal to purchase new uniforms and marching shoes. Donations may be made online.