by Shannon Thomason
From a comedy show with Quincy Jones to a Green and Gold Game and Blazer Fan Fest and Walk with a full halftime show from the Marching Blazers, Homecoming 2016 at UAB is happening. 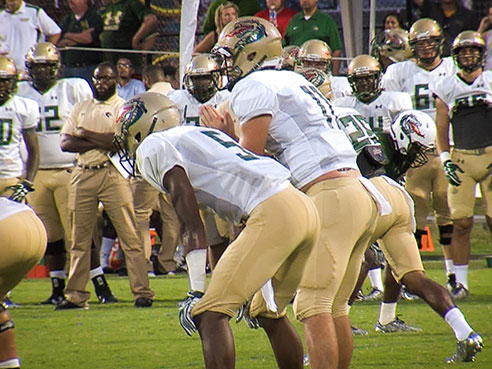 The Green and Gold Game will be held at 7 p.m. Thursday, Oct. 20.  The University of Alabama at Birmingham will celebrate Homecoming 2016 the week of Oct. 16-22, with the infamous Gurney Derby Competition, much-anticipated Green and Gold Football game, and a parade through Southside.

This year’s theme is “Forever Blaze.” The highlight of this year’s festivities is the UAB Football Green and Gold Game at 7 p.m. Thursday, Oct. 20, at BBVA Compass Field, with a Blazer Fan Fest, Blazer Walk, halftime presentation of Mr. and Ms. UAB 2016 awards and performance by the Marching Blazers, and a postgame fireworks finale.

UAB’s other traditional festivities, which are free and open to the public, include the Homecoming Movie on the Green, “Suicide Squad,” at 9 p.m. Sunday, Oct. 16; the Homecoming Comedy Show featuring Quincy Jones at 7 p.m. Monday, Oct. 17, at UAB’s Alys Stephens Center; a Red Cross blood drive at 11 a.m. Wednesday, Oct. 19, at the Campus Rec Center; the Homecoming Parade and Float Competition at noon Friday, Oct. 21; and the Blazer 5K Run and 1-Mile Walk at 8 a.m. Saturday, Oct. 22, on the Campus Green (registration is $5).

Traditional events for students, faculty and staff include Paint the Town at 3 p.m. and Blazer Hustle Scavenger Hunt at 6 p.m. Oct. 16; the Building Decoration Competition at 11 a.m., Green & Gold Games at noon, and Blazer Showdown at 7 p.m., all on Tuesday, Oct. 18; Blaze the Night/Fight Song Competition at 9 p.m. Oct. 20 in the UAB Mini Park; and the Health and Safety Fair and Dorm Burn safety demonstration following the parade.

Tickets for UAB Football’s Green and Gold Game are $5 for adults, $3 for youth and free for UAB students with valid ID. Fans can pre-purchase tickets by calling 205-975-UAB1 or by visiting the ticket office located at Bartow Arena. Blazer Walk will begin at 6:30 p.m. with kick-off at 7 p.m., followed by post-game fireworks. 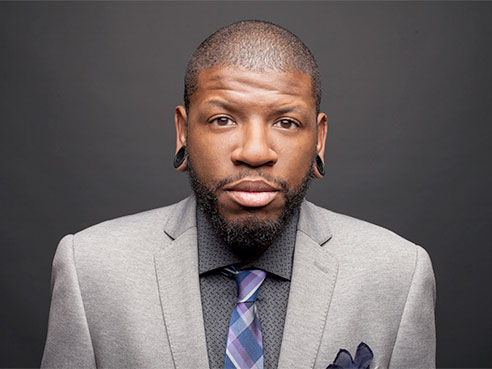 The Homecoming Comedy Show featuring Quincy Jones is set for 7 p.m. Monday, Oct. 17.  “Playing our second Green and Gold game during Homecoming Week will be very exciting,” head coach Bill Clark said. “We had an unbelievable turnout for our first game in August, and it really motivated our players to leave it all on the field. Our team has been working extremely hard, and we will be ready to show the fans how we’ve improved over the last two months.” 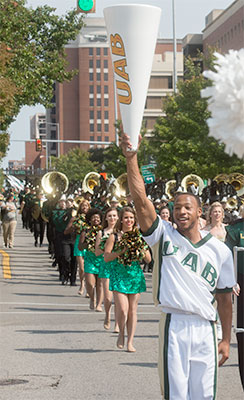 A performance by the Marching Blazers and a postgame fireworks finale are on the list of fun Homecoming activities.  To gear up for the game, Blazer Fan Fest tailgating will begin at 5 p.m. on West Campus Field, with interactive pre-game festivities including games, music, food trucks, meet and greets with UAB student-athletes, the UAB Marching Blazers, spirit squads, and more.

The winners of the 35th annual Mr. and Ms. UAB Scholarship Competition will be announced at halftime. Sponsored by the UAB National Alumni Society, this tradition recognizes outstanding male and female students on campus who have demonstrated scholastic achievement, leadership, campus and community involvement, and overall enthusiasm for UAB. Each winner will receive a $2,500 scholarship and serve as an ambassador of UAB in the coming year. The first alternates will receive $1,000 scholarships. Finalists are selected through two rounds of interviews and a student vote held during Homecoming Week.

The 200-member-strong Marching Blazers will perform their entire 2016 field show for the Green and Gold Game halftime. The show, “Hollywood,” features blockbuster film music from “Back to the Future,” “The Avengers,” “Star Trek,” Star Wars,” James Bond films, “Canned Heat” from “Napoleon Dynamite” and some surprises for the crowd. In conjunction with the return of UAB Football, the Marching Blazers are holding a fundraising drive for new uniforms in 2017.