Preparing veterans for their next call of duty

by Matt Windsor
New programs, facilities for veterans at UAB are attracting students from across the country. 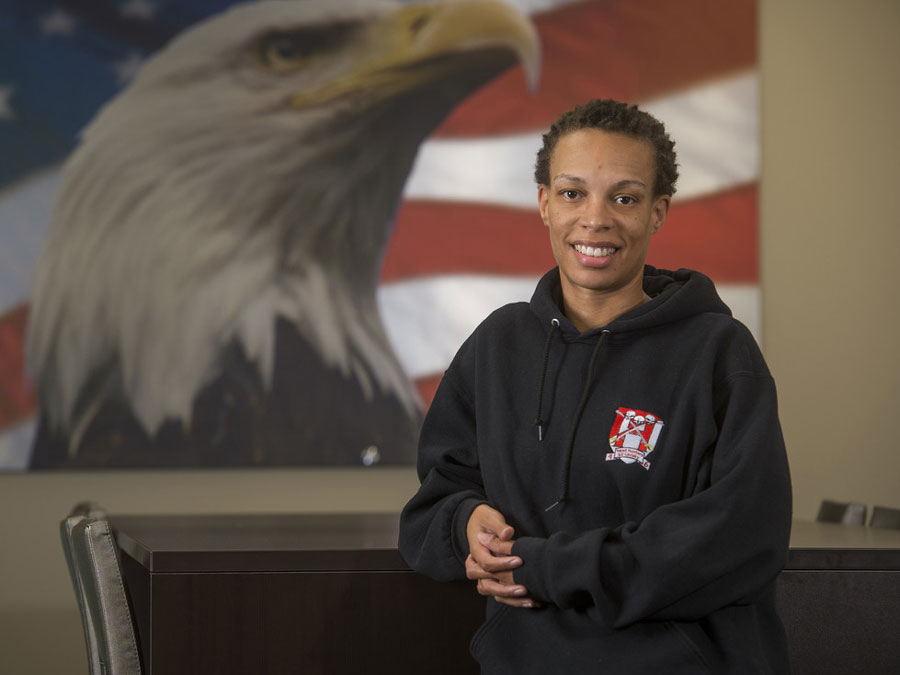 Jocelyn Stokes, a 15-year Army veteran, is now working toward a degree in health care management in UAB's top-rated program. Expanded Yellow Ribbon benefits at UAB mean out-of-state students can attend tuition-free in many cases.
For 15 years, Jocelyn Stokes served as an ammunition specialist in the U.S. Army, issuing, receiving and stocking ordnance at bases in Georgia, Texas, Washington and South Korea. Now she is putting that logistics training to use in a new setting: health care. “I decided to enroll at UAB because of years of research,” Stokes said. “I knew I was going to get out, and what better school to get a bachelor’s in health care management than UAB?”

Stokes is learning from many of the same faculty who lead UAB’s world-renowned Master of Science in Health Administration program in the School of Health Professions, which is rated second in the nation by U.S. News & World Report. And all of the university’s health programs benefit from a close affiliation with the Birmingham VA Medical Center, which is located just across University Boulevard. “My number-one goal after graduation is to give back to other veterans,” Stokes said, “and to do that, I need to be at the VA Hospital.”

UAB offered another major benefit: Starting this fall, the university has increased its participation in the Veterans Administration Post–9/11 GI Bill Yellow Ribbon Program to “unlimited” status. That means that veterans like Stokes who come to UAB from out of state and have full VA benefits can attend tuition-free. (In-state students who meet requirements can already attend tuition-free through other programs.)

Credit where credit is due

Another benefits change has allowed student-veterans to accelerate their learning: UAB will now accept up to 24 military credits toward a degree, a sixfold increase from the previous limit of four.

John Flores spent 14 years on active duty in the Air Force, the last seven as a K-9 handler, with two deployments in Iraq and one in Afghanistan. He is now majoring in criminal justice in the College of Arts and Sciences and is interested in going on to law school when he graduates. Flores was able to transfer credits from “most of the training schools I took part in,” he said. “Some of it also included leadership schools I attended while on active duty. These credits applied toward my electives.” Flores is interested in pursuing a law degree, which “leaves me with a few years of school after I graduate,” he said — and that makes the additional military credits he earned toward his criminal justice degree all the more valuable.

“All veterans say, ‘I want to get in and get out as fast as I can,’” said Walter C. Stewart III, director of UAB’s Office of Veteran Recruitment and Student Services. “It’s a win-win for everyone.”

These expanded opportunities are bringing increased enrollment from student-veterans. “Last year, we certified 665 vets,” Stewart said. “This fall we certified 810.” 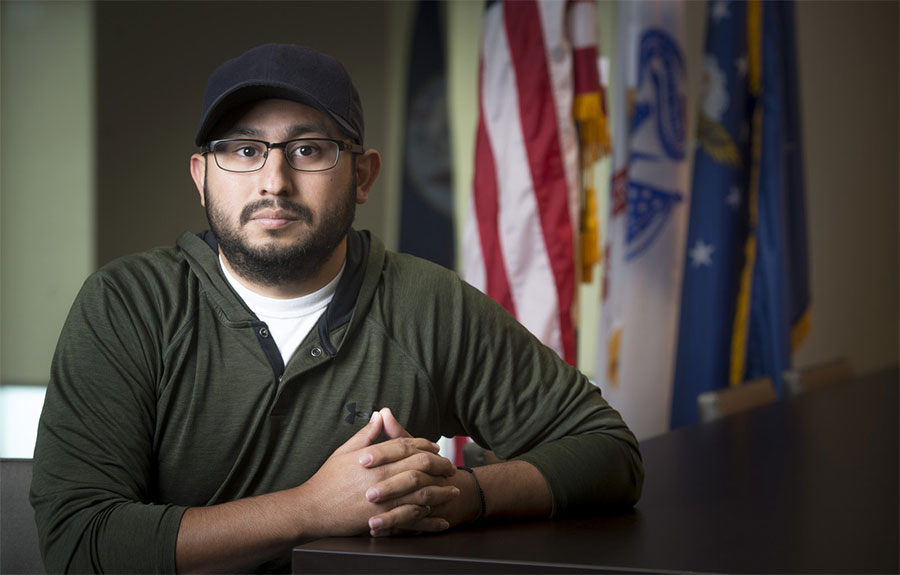 John Flores, a 14-year veteran of the Air Force, is majoring in criminal justice and pondering a career as a lawyer. Because UAB now accepts up to 24 hours of military credits, student-veterans can complete their degrees much more quickly. Stewart, who is on the road nearly every week at education fairs across the country, says these benefits turn heads when he speaks with military education counselors. “Their eyes bug out when they hear all we have to offer,” Stewart said. “If you can sell the educational counselors on your program, you will come out ahead.”

“We are proud to offer these new programs that make a UAB education more affordable and attractive to our military veterans,” said Bradley Barnes, Ph.D., vice provost for Enrollment Management. “Our enhanced commitment to veterans is bringing even more highly qualified students to campus.”

Student-veterans contribute to the campus community in many ways, says Stewart. “Maturity is their number-one characteristic,” he said. “They are very focused about what they want to do. Very seldom do they change degrees once they get started.”

“In 16 years of service with the Army National Guard, much of that time also spent working with students in higher education, I have seen firsthand how the discipline and focus of military training translate to success in the classroom and in life,” said John R. Jones III, Ph.D., vice president for Student Affairs at UAB. “Our growing numbers of student-veterans contribute greatly to a robust, diverse campus environment. We are proud to offer these increased programs and services to a group that has given this country so much.”​

As UAB’s student-veteran population grows, the university has also added dedicated space: the Veterans Student Center, on the third floor of the new Hill Student Center. The facility offers a large central space for meetings or viewing parties around a flat-screen TV, several nooks for studying, and a snack area. “They don’t have to stop at the Starbucks; they can come up and get coffee, free snacks, study,” Stewart said.

“What you miss more than anything when you leave the military is the camaraderie,” Stewart added. “I want to bring that back to their lives. For veterans, coming off the battlefield like many of them are, this is all so new. To get them coming here, engaging with the rest of the student population, is important.” Foot traffic has increased at least 30 percent since the new space opened, Stewart says. “We’re also tracking more on our Facebook and Twitter accounts.”

With the current military drawdown, U.S. soldiers around the world are looking at educational options to prepare themselves for new careers, Stewart says. He travels to military installations from Washington, D.C., down to Florida, as well as out to California. “Colleges out in California are overcrowded,” Stewart said. “I let them in on what we have to offer here at UAB. I talk about this being a diverse university, with a reputation that’s second to none, where you will get a quality education.”

Learn more about UAB benefits for student-veterans, or apply now.