by Shannon Thomason
Students will present papers on topics as diverse as the Aztecs’ bloody past, the Egyptian goddess Isis, Charles-François Daubigny’s floating studio, a mask of the female Sande society and the representation of women in 18th-century French portraiture. 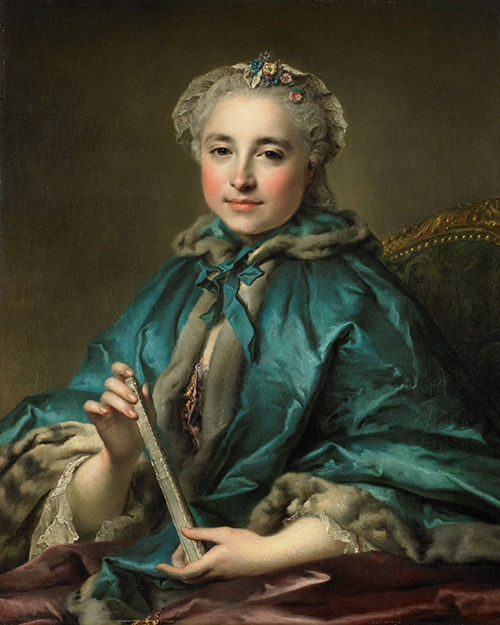 Presented by the College of Arts and Sciences’ Department of Art and Art History, the symposium is scheduled for 2-5 p.m. in the Abroms-Engel Institute for the Visual Arts’ Hess Lecture Hall.

From 3:45-5 p.m., Julia Browder will present “Unearthing the Truth: The Urban Excavation of Tenochtitlán,” Megan Hicks will present “The Representation of Women in Eighteenth-Century France as Seen in Louis Tocqué’s ‘Portrait of Madame de Livry’ (1745/1755),” and Sarah Faulkner will present “The Crux of Cultural Crossroads.”

In “Bounds of Representation: Albrecht Dürer’s Late Passion Drawings,” Adams will focus on three works: a 1521 rendition of “Agony in the Garden,” and two versions of “Bearing of the Body,” both from 1522.

Davis will discuss one of the most important goddesses in the ancient Egyptian pantheon in “Isis: An Egyptian Goddess in the Greek and Roman World.” Her paper explores the different depictions of Isis in Greek and Roman art, versus her traditional depictions in Egypt.

For “Charles-François Daubigny’s Floating Studio or Daubigny on ‘Le Botin,’” Bondarenko will examine how Daubigny’s floating studio, a boat he called Le Botin (Little Box), impacted his own artwork and that of younger Impressionist painters.

Housed in the Birmingham Museum of Art’s African Art Collection is an early 20th-century Sowei mask from the region of Sierra Leone in Western Africa, belonging to the female Sande society. White will explain how, for the Sande society’s women, a masked figure is considered an embodiment of their female mystical power and is integral to their initiation process with her paper, “Masquerade and Bodily Display: Sande Society Initiation Mask.”

In “Unearthing the Truth: The Urban Excavation of Tenochtitlán,” Browder will discuss the Templo Mayor, the nexus of the Aztec world, and how the ongoing excavations there have revealed ever-increasing evidence of large-scale human sacrifice. Her paper explores the nature of the excavation and how it is embroiled in the Mexican identity.

For “The Representation of Women in Eighteenth-Century France as Seen in Louis Tocqué’s ‘Portrait of Madame de Livry’ (1745/1755),” Hicks explores in her paper how the portrait, housed in the Birmingham Museum of Art, reveals the growing perception of the divisions of gender roles that are prevalent in French portraiture. Through close examination of the representation of Madame de Livry’s attributes and accessories, such as her makeup, clothing, and closed fan, she argues for the important role of this painting in the trajectory of 18th-century French female portraiture.

Faulkner will explore the indigenous elements that are evident in architecture in the Indian state of Gujarat, even after centuries of foreign influence. For “The Crux of Cultural Crossroads,” she focuses on Mahabat Maqbara, a mausoleum and mosque complex completed in 1892 CE by Sheikh Bahauddin for the Nawab Mahabat Khan II and his vizier Bahaduddinbhai Hasainbhai. The complex offers an interesting case study for the analysis of the perseverance of these indigenous design choices underneath the façade of foreign styles.