A senior in the College of Arts and Sciences’ Department of Music and the Honors College’s University Honors Program, Kasman, pianist, will graduate April 29, then embark on a tour and graduate school.
Read more stories about UAB's spring graduates on our Class of 2017 page.


Aleksandra Kasman has devoted much of her life to the piano, and after graduating from the University of Alabama at Birmingham this month, her hard work and skill will have earned her acceptance at several of the nation’s top music schools.

A senior in the College of Arts and Sciences’ Department of Music and the Honors College’s University Honors Program, Kasman will graduate April 29 with a major in music and a minor in French. She is preparing for her senior recital April 20, part of the Young Performing Artist program. She also has several recitals scheduled with her colleagues and with her teacher Yakov Kasman. 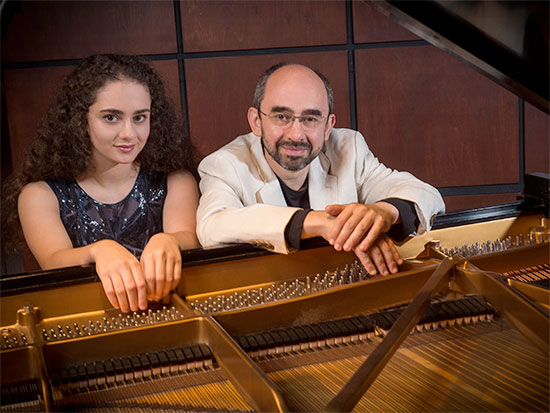 Aleksandra Kasman with her father and teacher, Yakov Kasman, DMA“The University Honors Program has allowed me to explore my academic interests as well as musical interests,” Kasman said. “I’ve done recitals for the program every year; I’ve gotten to travel to national and regional honors conferences and perform there and speak about music. And the Honors Program really just added to my UAB experience as a whole, in the most positive way. I’ve made so many new friends. I became very close with our wonderful faculty, and the interdisciplinary program really, I think, opened my mind in terms of academia, so much more than I could ever have imagined.”

Aleksandra is the oldest daughter of Yakov and Tatiana Kasman. Yakov Kasman, DMA, silver medalist in the 10th Van Cliburn International Piano Competition, is professor of piano and artist-in-residence for the Department of Music, where Tatiana Kasman is an instructor, teaching piano ensemble and class piano.

Aleksandra, known to friends and family as Sasha, says she considers herself very fortunate to have parents who are musicians, because they know so much about the industry. Her younger sister, Dina, a junior at Vestavia Hills High School, also plays piano.

“My parents really guided me growing up, not just musically but practically,” Kasman said. “Growing up, I was exposed to so many different performers and concerts, and my parents’ friends who are also musicians, and I learned from them. Just being in that atmosphere I think really contributed to my desire also to become a musician.”

Kasman has auditioned for several graduate schools and says she is very fortunate to have been accepted to her top choices, some of the best conservatories in the country: The Juilliard School, Yale University School of Music, Jacobs School at Indiana University-Bloomington, Eastman School of Music and Peabody Conservatory at Johns Hopkins University. She chose The Juilliard School, where she will study piano. Her home is in Vestavia Hills; but she has spent summers and winter holidays in Russia, her parents’ native home. She is fluent in English and Russian. 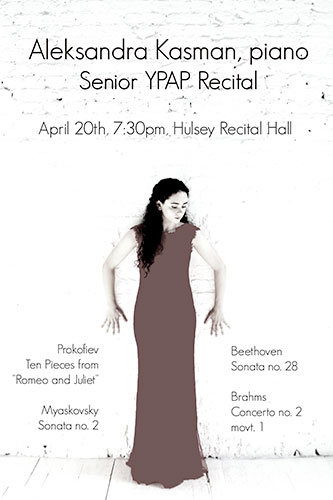 “I’m really excited to venture out. I’ve lived in Birmingham almost my whole life, even though I’ve gotten to travel quite a bit; but living in a new place, studying with a new teacher, because you know I’ve been with my current teacher for a long time,” Kasman said with a smile. “So meeting new people, being able to be in that conservatory environment: I’m really, really excited about it.”

In 2016, she was named a fellow of PianoArts, an organization in Milwaukee, Wisconsin, and after teaching and performing there last year, she was invited to do a two-week tour there in May. She also has a recital planned in Las Vegas, Nevada.

Kasman won the Music Teachers National Association’s Alabama state auditions in 2013, 2014 and 2016, and in 2015 was the alternate. In 2015, she achieved second place nationally in The American Prize in Piano Performance (Concerto) competition.

Out of a talented international pool of 33 pianists, Kasman took the top prize at the 2015 International Keyboard Institute and Festival in New York City. Kasman was accepted into this highly competitive event as a PianoArts North American Competition scholarship winner. At the time, she proclaimed that she hoped to go on to obtain master’s and doctoral degrees.

“The great thing about music is that there are so many things you can do: performing, teaching, masterclasses, workshops, recording. I have entertained the thought of possibly going into music administration. I am also interested in conducting,” Kasman said then.

Her awards include the National Federation of Music Clubs’ National Stillman-Kelley Award, silver medal at the International Competition for Young Pianists in Memory of Vladimir Horowitz, second place and Young Jury Winner Award at the Arthur Fraser International Piano Competition, and PianoArts North American Competition Scholarship Award. Her 2015 first-place wins include the NFMC National Collegiate Piano Competition, LaGrange Symphony Young Artists Competition, High Point University Inaugural Piano Competition and IKIF MacKenzie International Competition in New York. She gave solo recitals in the U.S., France, Ukraine, Russia and Japan and performed with the Alabama Symphony, LaGrange Symphony, the Symphonic Orchestra of the National Philharmonic of Ukraine and the National Symphony Orchestra of Ukraine, with which she played six concertos. Kasman joined her father in performances of the Saint-Saens’ “Carnival of the Animals” with the Brevard Symphony, Florida; with the New York Chamber Players; and with the Hendersonville Symphony, North Carolina. Her recent engagements also include solo recitals in New York, Washington, D.C., North Carolina and Las Vegas, and numerous duo-piano performances with Yakov Kasman in the U.S., Russia and South Korea.

As she closes the book on her time at UAB, Kasman shared with incoming musicians to UAB the best advice she has to give: to take advantage of every single opportunity.

“That’s what I tried to do in my four years here at UAB,” Kasman said. “I took advantage of every opportunity for a gig, to interact with a teacher, to take up someone on an offer to collaborate. I collaborated with everyone I could possibly work with, with my fellow students and music faculty, I performed a lot of chamber music, and that way I actually made a lot of new friends. I went to every event that my honors program sponsored, I went to all of the honors conferences, and that way I made a lot of new connections and learned a lot.

“And so, my biggest piece of advice would just be to take advantage of every single opportunity you have, and to seek them out, because that is how you teach yourself, that is how you make connections, and that is what is going to make you successful in the music world, and just in general.”