An interdisciplinary team that includes Engineering, the Collat School of Business, and the College of Arts and Sciences is reaching for new heights to make UAB’s team a perennial contender.
Written by: Katherine Shonesy
Need more information? Contact us 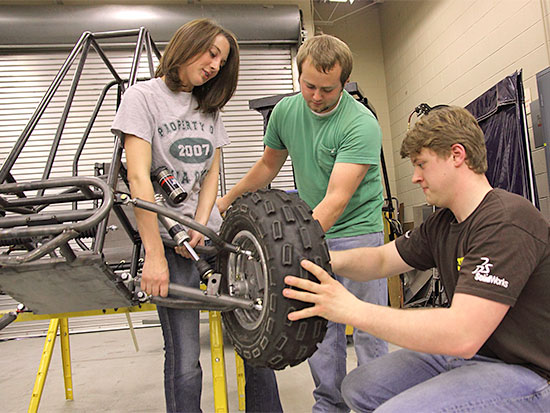 This archive photo shows the 2010 Baja team assembling their car. Increased funding would allow teams to improve design concepts from one year to the next.This Memorial Day weekend, Blazer Motorsports is taking a student-designed off-road car to a competition where it hopes it can compete against the nation’s best.

To get there, the team is launching a crowdfunding campaign it hopes will provide funds for this year’s event and help turn the University of Alabama at Birmingham’s Baja team into a perennial power.

Baja SAE is an intercollegiate design competition run by the Society of Automotive Engineers. Teams of students from universities around the world design and build small off-road cars according to a uniform set of specifications, with the ultimate goal of building and racing off-road vehicles that can withstand the harshest elements of rough terrain.

Over the past two years, UAB’s interdisciplinary Baja team, which includes students from all five School of Engineering departments, as well as from other schools across campus, has been working on an improved Baja car to compete in Pittsburg, Kansas. Travel expenses for the car and the team are expected to be around $10,000.

“At UAB, we have everything we need to have a championship Baja team,” said Steve Thompson, mentor for the 2017 team and field project manager in UAB’s Department of Mechanical Engineering. “We finished third as recently as 2011, so we know we can contend with other schools in our region, but we’ve never had the continuity we need from one year to the next.”

With this crowdfunding effort, Thompson says the team is hoping to change the culture at UAB from one that views SAE Baja as an isolated engineering project to a transformative experience that draws on strengths from across campus.

“There are a lot of advantages at UAB,” Thompson said. “In terms of facilities, not only do we have a first-class materials lab, we have a foundry, a custom fabrication shop and a computer numeric control lab. With those resources, there is no reason we can’t be contenders. We just have to develop the culture here to do it.”

One big step toward developing that culture over the past year has been the inclusion of the UAB Makerspace in the project. Makerspace is an interdisciplinary student-run facility that has brought students from other academic disciplines to the Baja team.

“They’ve really helped us organize students, particularly from the Collat School of Business, to help with marketing,” Thompson said. “One of the categories you’re judged on is marketing, so that is a key element.”

Another key element for future work will be the inclusion of students from the UAB Department of Art and Art History within UAB’s College of Arts and Sciences.

“They’ve agreed to assist with the 2018 team,” Thompson said. “So we’ll have students who can help us with the graphic design elements to give the car a more professional look. It takes more than engineering. Other schools have heavy participation from art and business students, so to compete with them, you have to have all three.”

At this point, the only missing piece is funding.

“It is expensive to design and build a car, and we’ve been fortunate in the past to get funding for that from the School of Engineering,” Thompson said. “The real expense comes when we take the car to competition. If the students have to pay out of pocket for that trip, that limits who can go, and we may end up with our strongest team members’ having to stay home.”

If the crowdfund campaign can raise $10,000, Thompson says it could help cover this year’s trip; but the team would face the same challenges in 2018. If it reaches its goal of $20,000, however, he sees a bright future for Blazer Motorsports as a major factor in bringing students to UAB.

“I think students will come to school here for the chance to work on this team,” Thompson said. “For the type of kid who enjoys this activity, we offer a unique opportunity.”