Opioid epidemic takes toll on those with chronic pain 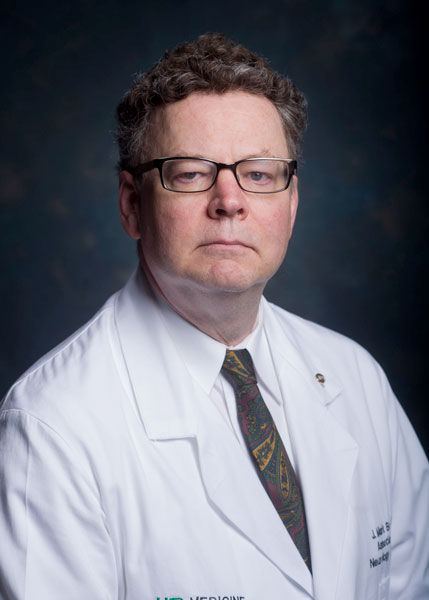 Bailey, a clinical professor in the Department of Neurology, sat on the panel of the Federation of State Medical Boards that recently updated opioid use guidelines for state medical associations.

“These are guidelines for the use of opioid medications in treating chronic pain, defined as pain lasting one month or more,” said Bailey, who served on the panel as a representative of the American Osteopathic Association.

Bailey was one of 15 experts in pain management and addiction, along with governmental officials, on the panel. The guidelines will help physicians and physician assistants navigate the increasingly difficult landscape of legitimate opioid use for pain management. Bailey says the guidelines produced by professional organizations are often used to drive state laws regarding drug abuse or establish policy by insurance companies.

“We are certainly in the throes of an epidemic, driven in large part by the abuse of non-prescribed opioids such as heroin and synthetic fentanyl and to a lesser degree by the misuse of legitimate opioid medications for pain control,” Bailey said.

The CDC reports that opioid overdoses have gone up by 33 percent over the past five years. Bailey says deaths from synthetic opioids such as fentanyl are up by 73 percent and heroin deaths are up 50 percent. Deaths from overdoses of oxycodone and hydrocodone are also up, but at a much smaller percentage, around four percent.

Bailey says the guidelines urge physicians to use best practices when prescribing opioids. These include a risk assessment for every patient, regular drug testing, increased observation for aberrant behavior such as running out of a prescription too early and an emphasis on low dose, short acting medications.

“The recommendation is for the lowest dose possible, beginning with short acting drugs and avoiding the extended-release, long acting drugs that can lend themselves to possible misuse,” Bailey said. “These really aren’t new recommendations. Many pain practitioners have been following these protocols for years. There is little scientific evidence that opioids are effective in the long term for pain. We also don’t have evidence that higher doses provide a better quality of life, or better long term pain control.”

The guidelines also call for medical professionals to have patients sign a written consent for opioid therapy and craft a treatment agreement which outlines the joint responsibilities of the clinician and patient.

However, the increased scrutiny of pain management, coupled with a mandate from the Food and Drug Administration requiring pharmaceutical companies to reduce production of opioid medications by 25 percent or more in 2017, has made it more difficult for patients who truly need strong pain control.

“Pain management is hard now and will get harder,” Bailey said. “Some pharmacies don’t stock the more potent opioids, and some insurers are denying claims for medications above an established threshold. Non-opioid treatment is going to have to assume a much more prominent role in chronic pain management – and patients are going to have to buy into this.”

Bailey says patients and physicians are going to re-think the “pill for every symptom” mentality and patients will have to assume a more active role in their own health care. He also says the guidelines suggest that clinicians should consider prescribing naloxone, or Narcan, for home use for all patients with opioid prescriptions in case of accidental or intentional overdose by the patient or household contacts.

The revised FSMB guidelines are not intended for the treatment of acute pain — typically lasting less than one week — or for pain management surrounding surgery or emergency care. Cancer-related pain, palliative care and end-of-life care are also exempt from the guidelines.

The full guidelines can be viewed here.