UAB alumnae to work in France as teaching assistants

Jayde SherronTwo University of Alabama at Birmingham alumnae will take up paid positions teaching the English language to French students of all ages through the Teaching Assistant Program in France offered by the French embassy in the United States.

TAPIF gives the opportunity for the students to work in France for seven months, a period in which they improve their own French language skills and get to explore the French culture. More than 1,100 citizens and permanent residents of the United States teach in public schools across all regions of metropolitan France, as well as in overseas French departments in places like Guiana, Guadeloupe, Martinique and Réunion.

Sherron’s interest for learning French emerged about seven years ago.

“Getting into the program has a lot to do with your knowledge of the French language and culture,” Sherron said, “so it really worked out for me because I have been studying French since my first year of high school.”

In the city where Sherron will teach, she is one of 20 teaching assistants accepted into the program from countries around the world. She is excited about meeting people from different countries and learning their cultures.

This will not be Sherron’s first experience in France. In her first trip, she visited different cities, and in her second, she went to Paris for a week to take French language courses at the Alliance Française, a dynamic network of local, independent chapters that promote the French language and celebrate francophone cultures. Her longest stay was when she studied in the University of Pau, a UAB Education Abroad partner, in Pau, France, for four months during the spring 2016 semester.

“I am beyond excited to start the program because France has really become a second home to me,” Sherron said. “I am thrilled that I will be working in France, and I hope that it opens the doors for more opportunities to go back many times in the future.” 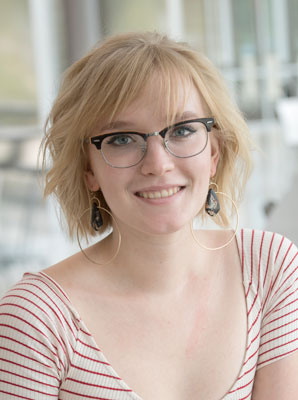 Tessa CaseSherron was on the presidential honors list in fall 2016 and spring 2017. Her career goal is centered around working with study abroad and international students and says that an ideal career would be working as an education abroad coordinator. For now, she is trying to explore the world and expand her horizons before settling down.

“I’ve taken a lot of different French classes and built a good relationship with my professors, who attested to my ability to speak French,” Case said.

Case has been to France three times, one of which was when she studied for a semester at the Université Lumière Lyon 2, a UAB Education Abroad partner, in Lyon, France. She is thrilled about going to a part of France she has not visited before. She also plans to travel to other places in Europe during her stay. As someone who wants to travel for the rest of her life, Case finds tasks like moving to another country by herself and setting up a long-stay work visa and foreign bank account to be vital skills.

“While France isn’t a complete 180 from the culture of the United States, there are several key differences, and there is a different language to incorporate into dealing with all the tasks,” Case said. “Not to be cheesy; but you learn a lot about yourself when you are constantly adapting to change, even if it is just a small change.”

In the spring semester of 2017, Case received the Outstanding Student in French award from the UAB Department of Foreign Languages and Literature. Case plans to pursue a master’s degree and career in journalism. She aims to be a correspondent to France and says there is always a possibility for her to take a different path and pursue further education or a career related to her thesis — policy-advising regarding conflict resolution and peace building.