by Jim Bakken
UAB’s student body grew nearly 7 percent year-over-year with gains in every school, the College of Arts and Sciences, and the Honors College. UAB also enrolled its largest and most academically prepared freshman class. 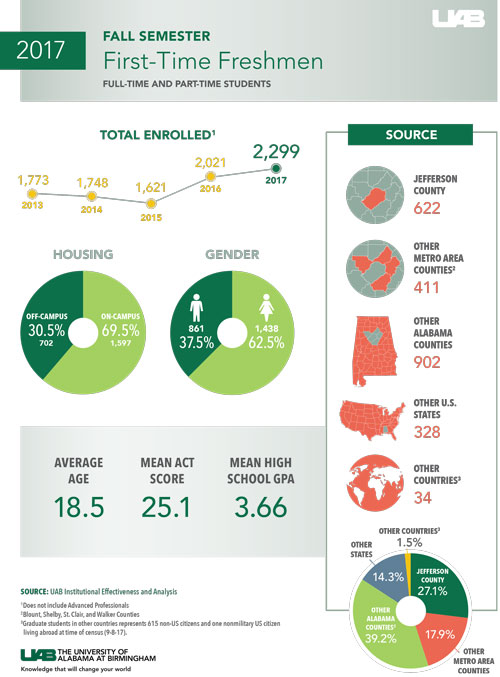 Click to enlargeFor the second consecutive year, the University of Alabama at Birmingham has achieved record enrollment, growing its student body to 20,902 — an increase of 1,367 students from last year’s record enrollment of 19,535.

The nearly 7 percent increase in overall enrollment was fueled by growth in every school in addition to the College of Arts and Sciences and Honors College. UAB also enrolled 2,299 freshmen, its largest class, representing an increase of almost 14 percent over last year’s record class of 2,021.

“Consistent enrollment gains like these are significant at a time when many colleges and universities are experiencing declines,” said Vice Provost for Enrollment Management Bradley Barnes. “Prospective students are taking note of our world-class education and research programs, as well as the unique opportunities and quality of life UAB and the city of Birmingham offer.”

While continuing to grow, UAB has maintained its commitment to excellence. The freshman class is UAB’s most academically prepared, with an average ACT of 25.1 and average high school GPA of 3.66.

UAB also continues to promote its core value of diversity and build on its reputation as one of the most diverse universities in the nation. The student body is 38.62 percent minority, and minority students make up 44.53 percent of the freshman class. The student population is 21.22 percent black and 61.21 percent female. UAB has 973 international students enrolled this fall, who along with 628 international faculty, staff and visiting scholars on campus, represent more than 100 countries around the world. 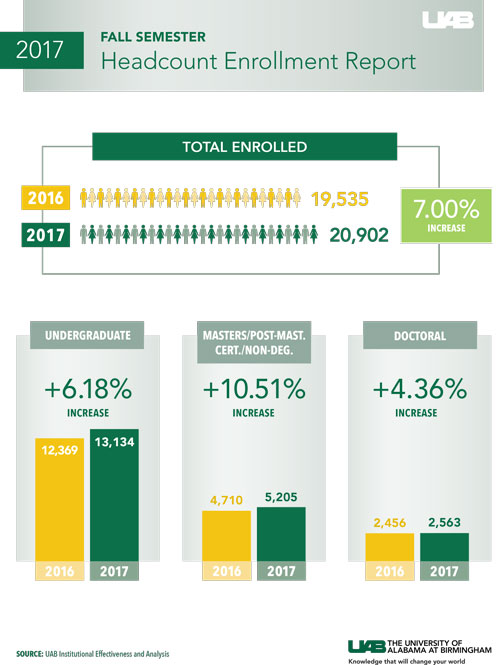 Click to enlargeUAB President Ray L. Watts established enrollment as a strategic priority when he became president in 2013, and he set a goal to have 20,000 students enrolled by 2018 — a goal that has now been exceeded a year early by nearly a thousand students due to continued and growing positive momentum in each pillar of the institution’s mission.

“Our consistent enrollment growth across the board is a result of, and a testament to, the dedication of all UAB students, faculty and staff, as well as our many supporters in Birmingham, Alabama and beyond,” Watts said. “There is a growing energy and excitement on campus — a momentum that represents many people working with strategic focus toward UAB’s standard of excellence in education, research, community service, health care and economic development.”

UAB Senior Vice President and Provost Pam Benoit is new to Birmingham and decided to become a Blazer because she saw the institution’s promise.

“We are attracting students, faculty and staff who are among the most talented in the nation and world because UAB is truly a special place,” Benoit said. “I welcome our students with a great sense of optimism and excitement for all they will achieve, and I thank everyone at UAB and beyond who continues to invest in their success.”