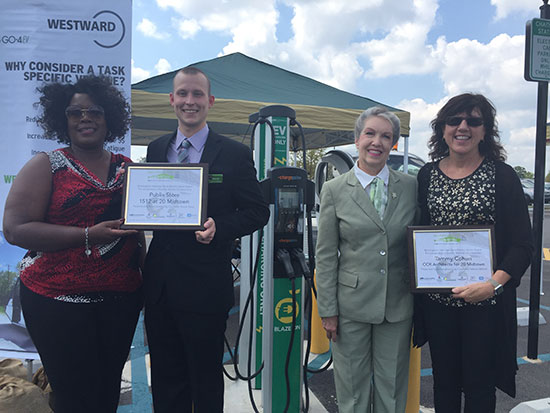 “When CCR Architects and Interiors designed 20 Midtown, they had the forethought to install electric vehicle charging stations in the parking deck for residents,” said Julie Price, coordinator of sustainability at UAB. “Publix Store 1520, which is also located at 20 Midtown, installed charging stations that are free for all customers. Efforts like this are helpful in increasing EV infrastructure so owners don’t have range anxiety when traveling and in increasing awareness about the availability of electric vehicles.”

The awards were presented by Birmingham City Councilors Sheila Tyson and Valerie Abbott. The businesses were recognized during Birmingham’s first National Drive Electric Week electric vehicle expo, hosted by UAB Sustainability. More than 30 electric vehicles were put on display for the community to learn more about the variety of electric vehicles on the market, charging stations, maintenance needs and costs, and incentives available for those who purchase them.

The event was part of a nationwide celebration to heighten awareness of today’s widespread availability of all-electric and plug-in hybrid cars, trucks, motorcycles and more. See some of the vehicles from the event.