More than a game: The lasting impact of UAB Football’s partnership with Children’s Harbor

by Laura Gasque
An improbable ending to UAB Football’s Homecoming game was the media highlight, but it was the families the team was playing for who gave it extra meaning.
Video by: UAB Visual Content

But a player with “Juarez” on the back of his jersey had other plans. He jumped up, swatted the ball away and set off a celebration that sent players rushing onto the field. It was a heroic performance that helped UAB preserve the victory.

But the player who sealed the victory wasn’t the only hero at Legion Field that day. 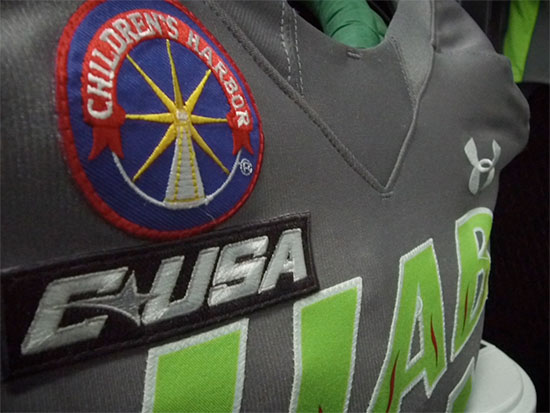 Jerseys made specially for this game.More than a name

When UAB entered the stadium Oct. 7, they suited up in uniforms specially designed for this game. The green was a few shades lighter. The names on the back weren’t their own.

The team wore the names of patients from Children’s Harbor, a nonprofit that provides counseling, comfort and support to families with children in the hospital.

When Stacy Keely blocked the final kick, Christian Juarez got the credit.

UAB football coach Bill Clark says the team wanted to shine a light on the fight many of these children face off the field.

“We want to play for more than ourselves,” Clark said during a news conference prior to the game announcing the partnership. “This goes beyond football, really anything we’re doing at this point, and really it’s about these kids.”

Linebacker Shaq Jones has many memorable moments during his time at UAB, but few compare with this one.

“To me, I feel like this game will be the game I remember most in my college career, because it’s not about me; it’s about more than me,” Jones said.

Of the nearly 100 children represented, some weren’t able to sit in the stands. Kara Bishop’s son Corey passed away last year.

“He had a smile that would light up the whole world,” she recalled. “Just seeing his name — knowing that he couldn’t do it, but knowing that part of him is still out there — it’s really special.”

Quarterback A.J. Erdely felt honored to be a part of the partnership and to wear the name “Children” to represent them all.

“Those kids are just the toughest,” Erdely said. “I don’t understand how tough they are.” 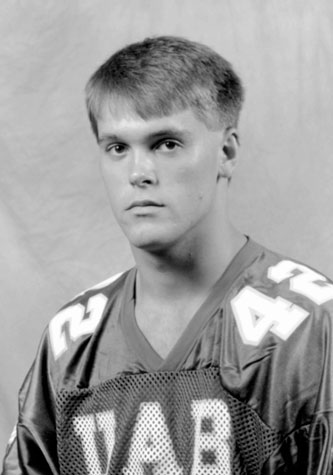 William Nichols. Courtesy of UAB Archives.More than a diagnosis

In June of 2015, the Nichols family was on vacation when 8-year-old Emme started showing signs of what they thought was the flu.

“She would projectile-vomit, complain of a headache,” Emme’s mother, Aimee, said. “They did blood tests. They did neurological exams. They did mono, flu, strep. Everything kept coming back negative. It just continually got worse.”

After being admitted to Children’s of Alabama, doctors discovered the worst.

“Emme had a brain tumor, and then we were told it was cancerous that night,” Aimee said. “We had our world flipped upside down from a healthy girl who we thought had a virus to now we have cancer and a brain tumor.”

Two days later, Emme had surgery to have the tumor removed. Her dad, William, remembers the difficult moments.

“It was very tough watching her, not just because she’s my daughter, because she’s our youngest, and you know you never want anything bad to happen to children,” he said.

The Nicholses say Children’s Harbor was there to help them every step of the way. Their friends and family shared their story and rallied around them.

“You really learn your extended family is not always blood-related,” Aimee said.

But they had no idea how far that support system reached. When Emme was in the hospital, members of the UAB Football team were at her bedside.

“When Coach Clark came in the program in 2014, he said something to all of us, as former players. He said, ‘You guys are family,’” said William, who played for the team while in college.

“Overwhelmed,” he said, fighting back tears. “You know, part of it’s because I played there. It means a lot to me.”

With two sons, William never imagined his daughter would be the reason the name “Nichols” would once again be on a UAB uniform. 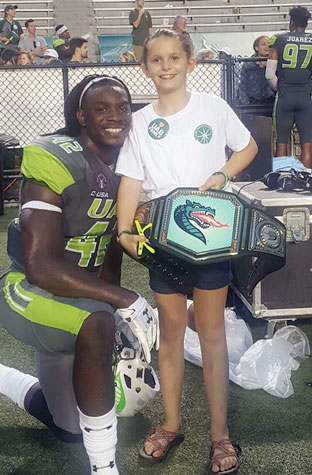 Emme with Shaq JonesMore than a coincidence

A black-and-white picture from the UAB Archives shows a younger William Nichols in his UAB Football photo from the ʼ90s. He’s not convinced 42 was the number he wore during games, maybe just a jersey he had to put on for picture day.

But when that name was back on the field this October, Shaq Jones, No. 42, was wearing it for Emme.

“All I can do is be inspired by someone like her and have as much courage as she has,” Jones said.

“It’s just special,” said Emme, as she thought about what the game meant for patients like her. “There’s so many children who have life-threatening diseases or things like that, and they may not be able to do this again.”

For Jones, Emme’s story is even more personal. His mother has the same condition.

“People look at me (like), ‘Nothing bothers Shaq,’ and things like that,” he said. “You know, there’s things that we deal with. I deal. I’m like a normal person. We all go through certain things, so that’s why it’s so personal and special to me because I can relate to going through those things.” 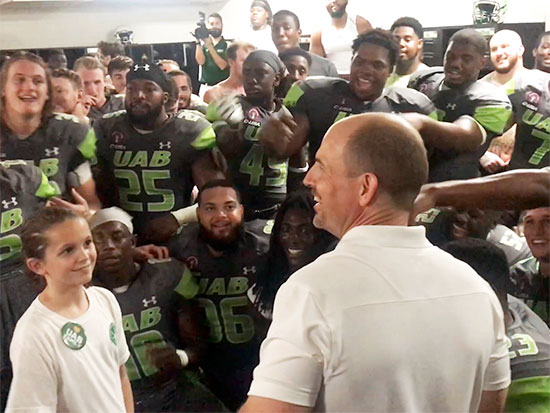 Emme and The FamilyHe told Emme that, when he took the field, he played for two reasons.

“I would love to wear your name, represent you,” he told her. “But not only am I representing you. I’m representing my momma, so it’s like a perfect match.”

More than a win

After the blocked field goal and unbelievable finish, the team erupted onto the field with excitement.

When they returned to the locker room, they knew who they wanted to be a part of their celebration. Jones hoisted Emme up above the players as they cheered and lifted their hands in the air.