by Jim Bakken
UAB student satisfaction in 2017 is higher than ever and increased significantly from the 2015 survey. UAB students also recorded more satisfaction than national averages among students at four-year public universities.
Video by: UAB Visual Content


University of Alabama at Birmingham undergraduates surveyed by a leader in higher-education research are generally much more satisfied with their university experience than are their counterparts at U.S. public four-year institutions, and their satisfaction has improved significantly over the last two years.

“The results are evidence of just how hard our students, faculty, staff and many supporters have worked to identify and create opportunities that enhance the student experience,” said UAB President Ray L. Watts. “I want to thank everyone who has played a part in building such positive momentum, making UAB a first-choice destination and home for students.”

During the 2017 spring semester, all UAB undergraduates were invited to take the Student Satisfaction Inventory survey conducted by Ruffalo Noel Levitz. The survey asks students to rate a wide range of experiences with the university and to rate how important those experiences are to them and their satisfaction.

“Our students are the reason we’re here,” said Vice President for Student Affairs John Jones. “I am glad so many participated in this process because the data is a nice supplement to the ongoing dialogue we have with our student population. It allows us to see where we stand and helps us constantly improve the UAB student experience.” 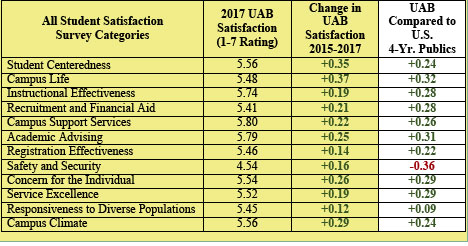 “Our students’ satisfaction exceeded national averages in 11 of 12 categories, and I see these results only improving.” said Senior Vice President and Provost Pam Benoit. “These results are evidence of UAB faculty’s and staff’s dedication to our students, as well as the investments students have made in their individual and collective experiences. With the momentum created by our students, faculty, staff and supporters, this is only the beginning.”

The highest scores students gave UAB were in response to the statement “This institution has a good reputation within the community.” Other top-performing areas included: “Nearly all of the faculty are knowledgeable in their field,” “There is a commitment to academic excellence on this campus,” “I am able to experience intellectual growth here,” and “There is a good variety of courses provided on this campus.”

The lowest satisfaction scores were in response to the statement “The amount of student parking space on campus is adequate.” Parking — a consistent pain point at universities across the nation, particularly landlocked urban campuses — was the only area in which UAB performed worse than it did in the 2015 survey. Identifying sustainable solutions has been a major point of focus for administration. UAB hired a firm that specializes in parking and transportation to conduct a comprehensive study to guide needed improvements.

“We are taking many actions to meet the needs of our growing campus,” said Parking and Transportation Services Director Andre Davis. “We have plans to add at least two new parking decks in the next three to five years, and update additional infrastructure and policies. In the meantime, we encourage students to take advantage of the Blazer Express and our express parking lots that have still never once been full.”

Student satisfaction with campus Safety and Security improved from 2015 to 2017, but was under the national average. A 2012 study conducted by the School of Public Health demonstrated that the perception of crime on campus considerably outweighed actual crime.

“The data are important because they help correct outdated misconceptions,” Benoit said. “The increased level of satisfaction regarding safety from 2015 to 2017 shows we’re moving in the right direction, but we have work to do. We will continue to be aggressive in our many initiatives to maintain safety and communicate results with our campus community.”

UAB Undergraduate Student Government Association President Mugdha Mokashi and her predecessors have been key leaders in the dialogues that help UAB better meet the needs of its students and maintain a commitment to constant improvement. She says she was excited about the survey results, but not surprised.

“To me, UAB is a world-class institution that can compete with top public institutions,” Mokashi said. “The results provided data for things we already know: primarily, that UAB’s students have a commitment to academic excellence and an appreciation for diversity and inclusion that is evident in our student life activities.

“One of the results that really excited me was how highly students felt about our counseling center; mental health is something my administration is very passionate about, and results like these show how important it is to continue supporting and growing our counseling center and mental health resources. I also really appreciated being able to see these results because it speaks to my student government’s commitment to data-driven advocacy. Learning where our strengths and weaknesses lie through survey data helps us better serve our student body.”

The Student Satisfaction Inventory response rate was roughly 19 percent, with 2,237 students answering at least some of the questions. Respondents’ race/ethnicity were similar to the undergraduate population as a whole, although women were disproportionately represented in the data.