Anthony Ray Hinton, who spent nearly 30 years on death row before being exonerated in 2015, will speak at UAB on March 1. 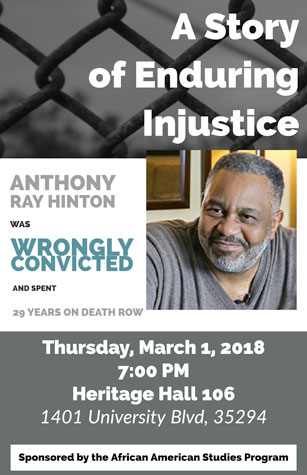 Anthony Ray Hinton, an Alabama man who spent nearly 30 years on death row before being exonerated in 2015, will speak at the University of Alabama at Birmingham at 7 p.m. on Thursday, March 1, in Heritage Hall, Room 106, 1401 University Blvd.

Hinton will discuss the challenges he has faced since being released and the need for criminal justice reform.

Hinton was falsely convicted and sentenced to death for the murders of two Birmingham fast-food restaurant managers in 1985. There were no eyewitnesses or fingerprint evidence, and police had no suspects at the time. A manager from a third restaurant who was also shot during a robbery but survived picked Hinton out of a photo lineup. According to Hinton, he was working in a locked warehouse 15 miles away at the time of the crime. He passed a polygraph test administered by police; however, a judge refused to admit the polygraph during the trial. State firearm examiners said that a revolver belonging to Hinton’s mother was the same weapon used in all three crimes. Hinton’s case was eventually taken on by the Equal Justice Initiative. Attorneys with the EJI worked on the case for nearly 15 years.

In 2014, the United States Supreme Court unanimously overturned his conviction, and a new trial began. Hinton was released April 3, 2015, after firearms experts re-tested the alleged murder weapon and could not say whether it was indeed the same gun used during the robberies.

The event is sponsored by the UAB African American Studies Program, which is housed in the UAB College of Arts and Sciences.