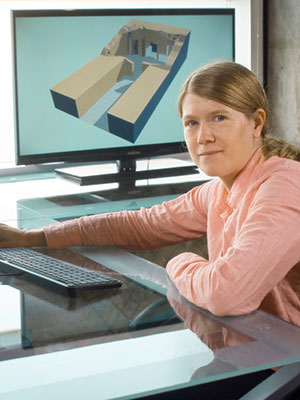 Parcak is an expert in the field of satellite remote sensing and wrote the first textbook on the subject, Satellite Remote Sensing for Archaeology. She uses earth-facing satellites to collect high-resolution imagery in order to locate potential archaeological sites around the world.

She is a TED senior fellow, a National Geographic fellow and the recipient of the 2016 TED Prize. With the $1 million prize, Parcak and a team of experts established GlobalXplorer, which launched in January 2017. The citizen science and archaeology platform allows anyone with an internet connection to review satellite imagery to search for looted sites and discover sites previously unknown to modern archaeologists. The platform also serves as a hub for conversations about new sites discovered, protected sites and the future of technology in archaeology.

She has gained international attention for satellite mapping all of Egypt and unearthing 17 potentially unknown pyramids (adding to the 138 known ones), 1,000 tombs and 3,100 settlements. Also among the discoveries was a detailed street plan of the city of Tanis, once the capital of ancient Egypt and a site made famous by the Indiana Jones film “Raiders of the Lost Ark.”

She and her team have since uncovered thousands of additional ancient sites across Europe, the Mediterranean and the North Atlantic, and have also used satellite technology to map extensive looting in post-revolution Egypt. Recent discoveries include a previously unknown structure in Petra, a 2,500-year-old Nabataean city in southern Jordan, and evidence of a potential second Viking site in North America, the subject of PBS NOVA’s two-hour special, “Vikings Unearthed.”

Parcak and her husband, Egyptologist Greg Mumford, work together on the Surveys and Excavation Projects in Egypt, which includes archaeological projects in the Delta, Sinai, and pyramid fields regions of Egypt. Parcak and Mumford were awarded the 2017 Antiquity Prize by Antiquity, a peer-reviewed journal of world archaeology, published by Cambridge University Press, for their decade-long study of looting at ancient site in Egypt.